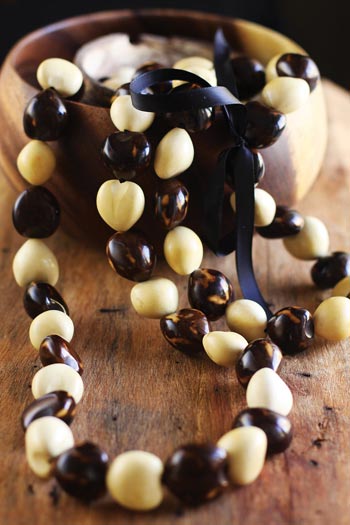 Hanalei Peters rests a pair of beefy forearms on the table and leans in to talk. The mellifluous name embroidered on his work shirt seems at odds with the burly frame and rough-and-tumble demeanor of a local guy who has worked in engineering at Ka‘anapali Beach Hotel for nearly forty years—many of them as head of the employees’ union.

He remembers the day twenty-five years ago when he met Mike White, who had just become the hotel’s general manager.

“I was in the parking lot, and Mr. White came up and asked me my name. He told me this huge plan he had for how we should address the Hawaiian perspective.”

White wanted every employee to attend classes in Hawaiian culture, history and values. To Peters, who is Portuguese-Hawaiian, the new GM seemed like one more haole manager, stirring up change the moment he arrived. And this one expected Hanalei to take classes in his own culture!

“I looked at Mr. White and said, ‘Yeah, sounds like a good plan.’ But I thought, ‘Boss, I seen ‘em come and seen ‘em go, and not one manager spoke without a forked tongue. You’re gonna have to prove yourself to me.”

In 1984, White had attended a tourism summit in Honolulu, and had been impressed by the urgent appeal of several Hawaiian leaders. “They said if we don’t start preserving the culture of Hawai‘i, we’ll lose the essence of this place. I took that to heart.”

At the time, White was working as resident manager at the Big Island’s Mauna Lani Bay Hotel. His boss was Kenny Brown, a Native Hawaiian and former State senator.

“Kenny was on the board of Bishop Museum, Amfac . . . a very connected guy. I asked him, ‘What should a hotel do to preserve the culture?’ He said, ‘I don’t know. Let’s call George Kanahele.’”

A renowned Hawaiian scholar, Dr. Kanahele had literally written the book on Hawaiian values: Ku Kanaka—Stand Tall. Over a series of meetings, the three men began to design a cultural program that would come to be called Poʻokela, the Hawaiian word for “excellence.” Then Amfac—developer of Ka‘anapali Beach Resort—asked White to head their Maui hotel. With Brown’s approval, White took their nascent program with him. The first Poʻokela class was held in May 1986.

White admits, “We flew by the seat of our pants, and just did what we felt was right.”

“We knew it would improve the guest experience,” says White, “but the real focus was on teaching our employees—not just about the culture, but the values.”

For the first three years, Dr. Kanahele would come to the hotel to conduct classes in subjects like “A Hawaiian Sense of Place,” “The World of the Sacred,” “Primal Hawaiian Economics,” and “Hawaiian Health and Medicine.” Classes were held every quarter, on company time. Attendance was mandatory.

The most meaningful classes, says Dee Coyle, director of training, were those that took employees off property. “If you’re going to teach this culture, you have to go outdoors.”

One class took employees into Honokohau Valley. “We started at the beach, which was all rocks,” says Coyle, “and talked about how the ancestors had to make tools, stone on stone. We had a carving lesson, then we were told to make a poi pounder. So there are thirty of us, sitting on the beach, tak, tak, tak, pounding away. Next, we went to the freshwater stream and learned how Hawaiians had used the river. Then up into the mountain. It’s pouring, and we’re in umbrellas and rain jackets, picking flowers and ferns and learning to string lei wili without string.

“What other hotel would pay employees to do this?” she asks.

Kanahele began Po‘okela on the condition that others would eventually take over. Dee Coyle, Lori Sablas (who became the program’s director), and kumu hula Akoni Akana assisted, and later developed new classes with their mentor’s blessing.

Over time, Po‘okela acquired a momentum of its own—even if no one knew quite where it was going. It was so unprecedented that, at first, White admits, “We flew by the seat of our pants, and just did what we felt was right.”

White and his executive team redesigned the hotel’s organizational chart as a conceptual ahupua‘a, the traditional Hawaiian land division that guaranteed all the needs of the people would be met. They asked each department to create its own code of conduct based on Hawaiian values. And each department adopted an artifact that symbolized its role in the company. Sales & Marketing, for example, chose a conch shell.

In 1990, Akoni Akana and Kano‘eau Delatori, another member of the cultural staff, asked the hotel to host a children’s solo hula competition—not as entertainment, but as serious competition juried by revered kumu hula from around the state. (This year, Hula O Na Keiki will celebrate twenty-one years of perpetuating this aspect of the culture.)

Around the same time, Lori Sablas taught a class that revealed a part of history most employees had never known: that Lahaina had once been home to a royal island surrounded by a pond, protected by a mo‘o, a mythic lizard. Long buried and forgotten, Moku‘ula had become part abandoned dirt lot, part ball field. After a visit to the site, a group of employees formed the nonprofit Friends of Moku‘ula, with Akoni Akana as executive director. For more than two decades, the Friends have worked to educate the public about this legendary site and raise funds for Moku‘ula’s eventual restoration. (For more, see Jill Engledow’s story “Resurrecting Moku‘ula.”)

Mike White had hired Sablas in 1989 to direct the Po‘okela program. She remembers his edict. “Mike said, ‘I want to make this place Hawaiian.’”

Sablas did what any self-respecting Hawaiian would do: she looked to the source. Reasoning that aloha was the essence of the culture, she invited Pua and Ned “Papa” Lindsey, parents of the esteemed Hawaiian conservationist Ed Lindsey, to come to the hotel once a week, sit in the lobby and talk story with the guests. “They’d dress up, and bring things like ‘ulu (breadfruit) and noni (a medicinal plant) to show our guests.”

Those early visits blossomed into a kupuna program that now brings Hawaiian elders and craftspeople to the hotel lobby to mingle with guests several days a week.

Before Dee Coyle joined the staff of Ka‘anapali Beach Hotel, she and husband Herb performed old-time Hawaiian music at venues all over the island.

“When we got this gig,” says Coyle, “it felt like home. Mike saw our passion to promote the culture through music. He asked me to apply for Guest Activities director. I took it as his asking me to  educate our guests in a fun, exciting way—whether they knew they were gaining Hawaiian knowledge or not.”

Every Friday, at eleven, a dozen-or-so employees stop their regular duties and gather in the lobby with guests to share lei, sing songs and dance hula.
“That’s Lia,” says Sablas, pointing to one of the singers. “She’s in Housekeeping, but she loves to sing, so she comes. The guy with the guitar is our computer geek.”

When Guest Service’s Malihini Keahi-Heath invites a young man from New York to dance with her, there’s no embarrassing sense of being put on the spot. Guests and staff alike exude a genuine sense of warmth and family.

Ask them, and they’ll tell you it is  family. (Ask Malihini. She met her husband-to-be at the hotel. At their wedding reception, three lengths of tables were returning guests.)

“We have a real easy customer-service equation,” says Dee Coyle. “Aloha, kokua, mahalo. Greet, help, thank. The aloha has to be you, the employee, saying it first, giving eye contact and a nice smile. If you see someone with a question on their face, help them. Thank the guest for coming to the restaurant, for being at the lei ceremony.”

Encouraging housekeepers and bellmen, engineers and waitresses to interact with guests may be unorthodox by Western business standards, but guests love it—so much so that, although it is the least fancy of Ka‘anapali’s hotels, it consistently has one of the resort’s highest rates of occupancy and return guests.

“Guests tell us they came here for their one Hawai‘i trip,” says Sablas. “They keep coming back—and bring friends.”

Larry and Judy Nunn of Salem, Oregon, are typical. “We already have our reservations for next year,” says Larry. “Same room.”

“We have made friends here who come back every year,” Judy adds.

Mike White sees a strong similarity between the hotel’s clientele and his parents, who helped shape his perspective. “My parents used to travel extensively. They never stayed in fancy places; they stayed in places that reflected the culture. Like them, our guests want to be embraced by the local culture.”

Ultimately, what makes that sense of family possible is the hotel’s incredibly low rate of employee turnover.

“Seven or eight years ago, there were three hotels in West Maui with turnover in excess of 100 percent,” Mike White recalls. “The lowest one we found had 40 percent turnover. We were at 15 percent.

“The average tenure among our management is over twenty years,” he adds. “That’s highly unusual.” So is the fact that half of White’s executive staff—five out of ten managers—have Hawaiian ancestry.

White admits that it helps that Ka‘anapali Beach is an independent hotel. Basing its business practices on Hawaiian values “would have been much more difficult if we were part of a chain. Our managers don’t get pulled away to other hotels after we’ve trained them.”

“What surprised me about Po‘okela,” says Engineering’s Hanalei Peters, “was how it changed the attitude of all of our employees. I wish you could have met me, the before and after. I was a jerk. I like to say in my defense, the previous managers made me that jerk. It was a tense environment before Mr. White and Po‘okela. Not a person who has passed through Po‘okela, it didn’t help them in some way—peace of mind, setting goals, softening your hardened heart.”

Read what Ka’anapali Beach Hotel employee Lani Nishimura has to say about discovering her heritage during the hotel’s celebration of Makahiki in “Ripple Effect.“

We dedicate this story to Akoni Akana, who passed away on March 25, 2011. In his fifty-four years, Akana made exceptional contributions to Maui’s cultural heritage.