*UPDATE* Poet Laureate William S. Merwin passed away on the morning of March 15, leaving the world a legacy of literary works, both poetry and translation. 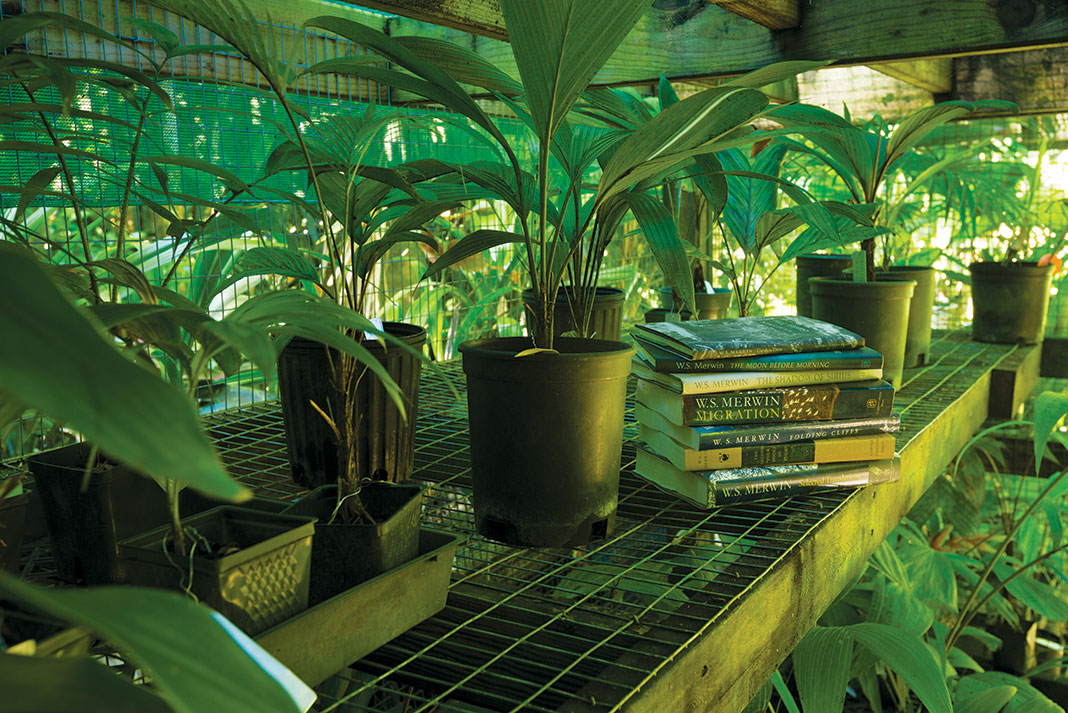 I want to tell what the forests
were like

I will have to speak
in a forgotten language

“There’s a language of trees and William speaks it. He’s a palm whisperer.” Olin Erickson leads a handful of visitors down a steep, muddy trail, stopping to share anecdotes about his boss, William S. Merwin, the former U.S. poet laureate who planted this palm forest on Maui’s north shore. Erickson pushes back an ambitious frond to allow the group to pass beneath. “Whenever we walked through the garden,” he says, “William would look at a palm and get this smile on his face. He’d go up and touch it, like shaking its hand, and checking its pulse. He’d tell me a little story about where he got it, just like introducing me to a friend.”

Indeed, Merwin’s forest is composed of friends: seeds collected from around the world, traded among fellow growers, nurtured, hand-watered, and now grown twenty, thirty, or even forty feet tall. It’s a cathedral of greens. Angular fronds filter gem-toned light into the grove. Seeds as bright and round as Bedouin beads dangle from slender trunks, while other trees brandish nine-inch thorns — evolutionary throwbacks to the dinosaur age.

When Merwin purchased this property in 1977, it was barren, except for a few scraggly mangoes and a rash of invasive Christmas berry. A succession of failed agricultural ventures had utterly depleted the soil. Wasted and remote, the land was exactly what he wanted. It offered, in the poet’s own words, “a chance to try to restore a bit of the earth’s surface that had been abused by human ‘improvement.’”

Merwin set to work in the dry streambed, crawling through the Christmas berry with a handsaw. “He wanted to free the stream,” says Erickson. Originally Merwin intended to restore the landscape with native species, but nearly every one of his first plantings perished. Only the loulu, or Hawaiian fan palms, survived. So he revised his plan. During rainy spells he planted at least one palm a day.