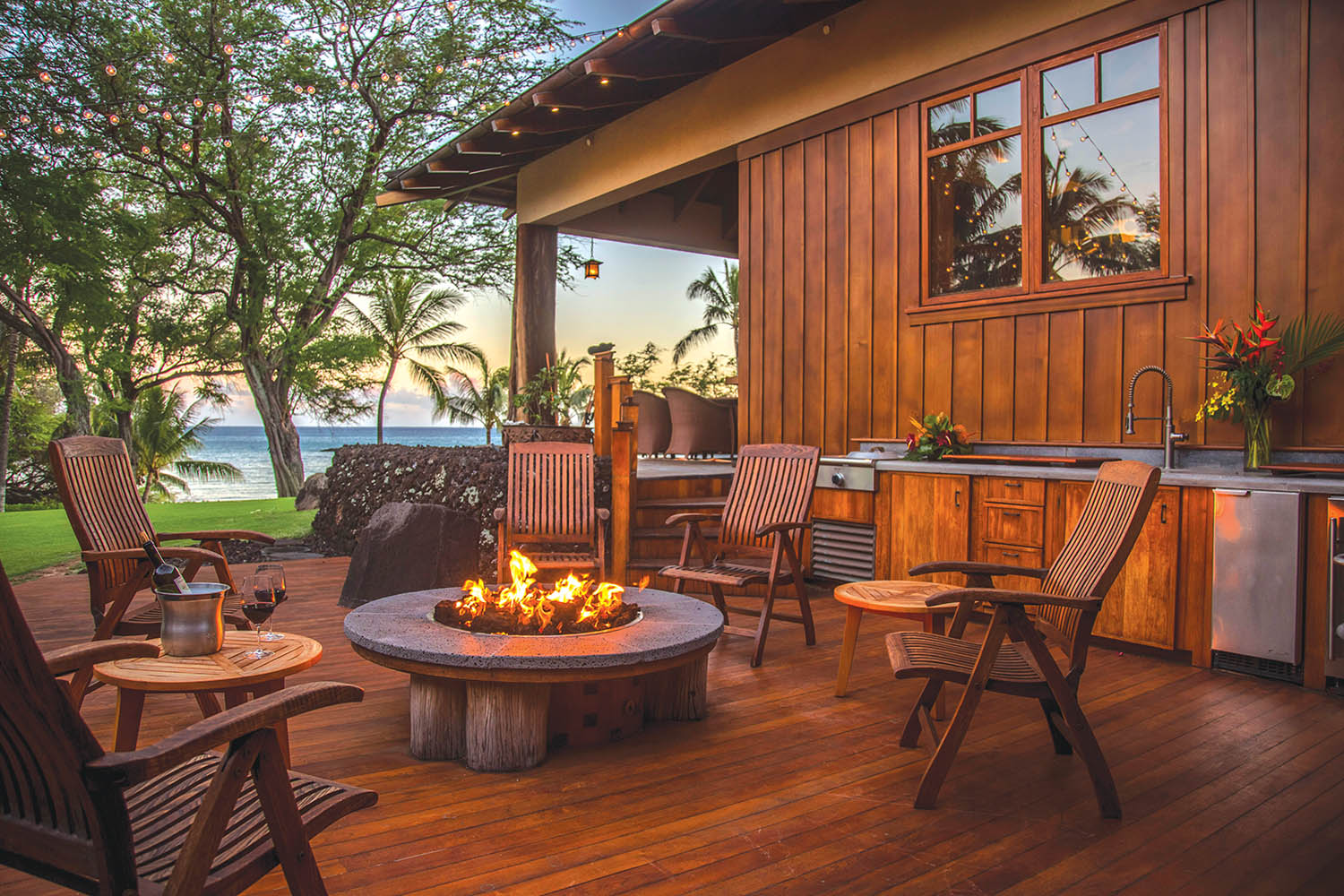 Thousands of years ago humans huddled around fire pits and cooked meals over the dancing flames. By the Middle Ages cooking had largely moved indoors, with many medieval meals prepared in cauldrons hanging over an open hearth. In 1735 architect Francois Cuvilliés introduced the wood-burning Castrol stove to French houses and less than a decade later Benjamin Franklin debuted the eponymous metal-lined Franklin stove in American homes. The gas stove came along in 1826, followed by the electric stove in 1912. Then in 1952 a Chicago welder named George Stephen started to move things back in the other direction when he sliced a buoy made out of sheet metal into two half-spheres and invented the dome-shaped Weber kettle grill, inaugurating the era of backyard barbecuing.

The evolutionary (re)cycle hasn’t ended. Many of today’s outdoor cooking spaces now rival their indoor counterparts, providing an elegant and engaging place to prepare meals, entertain, and relax and unwind. Here, three Maui couples share how they cooked up the al fresco kitchens of their dreams—and why nothing beats dining out in their own backyards.

A Chef’s Kitchen, Made from Scratch
Kaili and Jeff Scheer, Kula

On a cool and breezy summer night, Jeff and Kaili Scheer are hosting a dinner party for twenty on their back deck. Amid the buzz of conversation, Jeff sprinkles fresh herbs on a homemade pizza before sliding it into the wood-fired oven nearby. Someone taps him on the shoulder: It’s his turn. He picks up a pingpong paddle and rejoins the party.

When Jeff, MNKO’s 2015 ‘Aipono Chef of the Year, and Kaili, founder of Olympia Activewear, bought their Kula home in 2017, one of the first items on their to-do list was to build an outdoor kitchen.

With some help from Jeff’s mom, who is a retired carpenter, and a few of their construction-savvy friends, the Scheers expanded the once-diminutive wood deck and built a kitchen along its north-facing side. Today, it has a pizza oven and a ceramic charcoal grill-smoker known as a Big Green Egg, along with a stainless steel sink, ample storage, and a slatted pergola to provide shade. To complement the rustic look and for durability, the couple opted for concrete countertops. Last year,

Jeff decided he wanted a ping-pong table too. Since the outdoor kitchen still lacked a dining table, Kaili proposed an idea: Why not pour a large slab of concrete that could be used for meals and ping-pong? The Scheers say the kitchen is still a work in progress. They plan to add, among other things, a drawer refrigerator and gas fire pit to warm up the chilly Kula nights. They still enjoy cooking inside, but say the outdoor space offers so much more: fresh air, sunsets, and most importantly, quality time outside together.