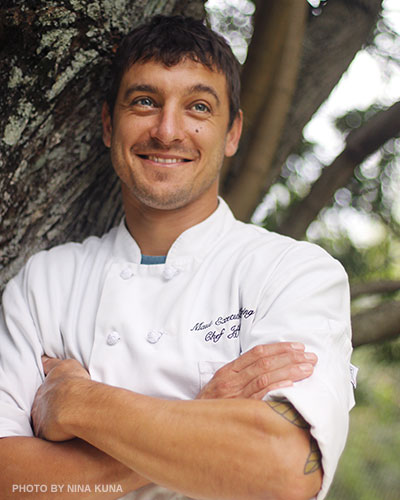 In 2006, Jeff Scheer walked into Maui Culinary Academy for the first time. He was registering for the two-year program and I happened to be the intake advisor that day. “I cook at Tommy Bahama’s,” he said. “I like my job, but I feel like I’m not going anywhere. That’s why I’m here.” When I cautioned that it’s hard to work and go to the Academy full time, he shrugged. “I’ll work; I have to.”

Jeff stumbled into his classes five days a week, bleary-eyed from late nights at the stove. A few months into the program, he surprised the faculty by starting his own business, Maui Executive Catering. Here was a student who had no fear, asked lots of questions, and didn’t let sleep deprivation slow him down.

After graduating, he continued cooking and delivering food to his charter-boats clients, and later catered high-end private events at venues like Haiku Mill, one of Maui’s most elite wedding locations. In 2013, the Academy hired Jeff as an instructor.

Innately curious about the food arriving at his kitchen, Jeff started helping at Kupa‘a Farm, an organic venture run by Gerry Ross and Janet Simpson. Whenever time allowed, he worked the dirt and even harvested some of his own produce. Jeff continues to build relationships with local farmers, ranchers, and fishermen.

His most recent undertaking is Maui Chef’s Table. Walking into the kitchen, you can’t help noticing the meat hook dangling from the ceiling. A believer in nose-to-tail cookery, Jeff incorporates Old World techniques for sausage making, dry curing and smoking meats, which he has translated into a refrigerated locker filled with charcuterie: spicy Spanish pepperoni, sweet Hungarian and Italian salami, and aged prosciutto.

Tonight, I am one of twenty-four fortunate diners at Jeff’s. As guests trickle in for the seven-course, prix fixe menu, he is animated and gracious, thanking each person for coming. More than once, I hear returning guests tell first-timers, “Oh, you’re in for a treat!”

The first course is a sigh-maker. I take a bite of the delicate pate choux filled with the creamy sweetness of a farm-fresh sous vide egg. As I dip the delicate pastry into a pool of minced herbs and red-pepper sauce, I wonder how something so simple can be so heavenly. Jeff’s use of quality local ingredients and innovative culinary techniques (some based on what he learned while staging at O‘ahu’s Vintage Cave and Chef Michael Chiarello’s Bottega in Napa Valley) convinces me the young culinary student I enrolled nearly a decade ago hasn’t changed: he’s always challenging himself to do better.

Congratulations to Jeff Scheer, ‘Aipono’s 2015 Chef of the Year!

“Jeff has proven through his great food, hard work and dedication to our community how well he represents his industry—locally, nationally and hopefully one day on a global scale.”
—Executive Chef Isaac Bancaco, Ka‘ana Kitchen, Andaz Maui

“A creative, driven and innovative chef, Jeff is a huge supporter of local agriculture, is committed to the community through participation in nonprofit events, gives back to the industry through his part-time teaching at MCA, and serves as an ambassador through the Maui Visitors Bureau Chef Exchange—leading efforts to connect top mainland chefs to Maui’s exciting culinary movement.”
—Chris Speere, Outreach Coordinator, Maui Culinary Academy

“Jeff is one of the most creative chefs out there, always learning and growing his craft. Not to mention [he is] a smart business person.”
—Chef Lyndon Honda, Events & Catering

“I have watched Jeff since his days as a budding culinarian at MCA. He has also inspired me to seek out new ways to offer Maui’s bounty. Jeff has passion, and it is always fun to get his insight and hear about what he is working on next. Continued success to a fine young man with great drive and determination.”
—Executive Chef Ryan Luckey, TS Restaurants