As one whose sweet tooth is frequently indulged, I’ve enjoyed more than my share of triple-berry and hula pies, molten-lava and pineapple upside-down cakes, and that most decadent of sweet temptations — no, not Johnny Depp — the Black Pearl at Mama’s Fish House. I’ve loved each of them dearly, but there comes a time when a diva should move on.

To expand my confectionary horizons (and, alas, my horizontal stature), I have combed the island, and feted on untold riches (i.e., gobs of butter and mounds of sugar) in a paradise overflowing with milk and honey, spiced with cinnamon, covered in chocolate and often set ablaze.

Magnanimous to a fault, I have decided to generously share my findings. Without further ado: Dining Diva’s list of Maui’s Best Desserts. 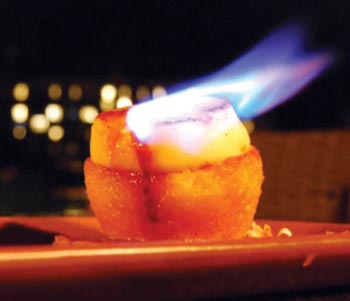 One of the first things Executive Chef Gregory Grohowski did upon his recent return to the Hyatt Regency Maui was to change the dessert menu at Japengo. “I wanted to incorporate more local flavors,” he explained during a recent chat at the sushi bar. (We’d come to try the new dessert menu but found it impossible to pass by the sushi bar without indulging in the Honolulu and SWAT rolls first.)

The restaurant’s gorgeous setting, just off the lobby, overlooking the ocean and the island of Lanai, attracts crowds for pau hana and sunset. During our visit the sun upped the ante with an amazing cloud-shrouded corona and that elusive feat of prestidigitation known as the green flash. As if to compete, moments later our server ignited our dessert.

The flaming pina colada creme starts with a slice of pineapple, flashed with sugar over fire to reduce the acid. Over that Chef Greg places an intensely moist single serving of pineapple upside-down cake. Balanced on that is a ramekin-size serving of coconut creme brulee that is doused with rum and set ablaze (which creates the “brulee” in a dramatic fashion highly appealing to any self-respecting diva). Each of the elements would be delicious on its own; together they become one of Maui’s best desserts.