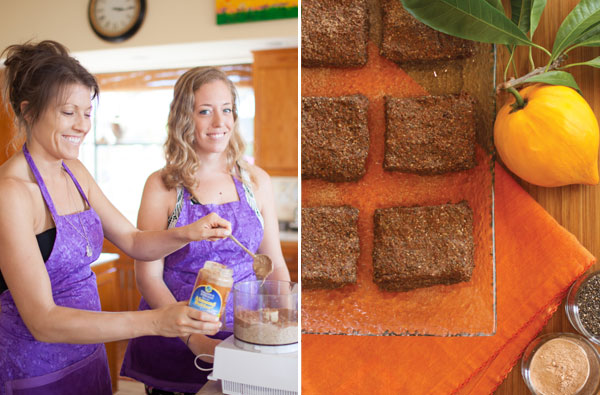 Emily Kunz and Kathryn Dahm, chef/owners of Choice Health Bar in Lahaina, have a secret to tell: “Neither of us ever worked in a restaurant before opening Choice.”

Though their conversation is peppered with laughter, the two have impressive credentials. Before she got a job at a health-food store in Honokowai, Kathryn secured an anthropology degree from Boston U. Emily earned a bachelor’s degree in biology and religious studies from the University of Virginia, and worked in banking on the East Coast until 2008. When tides in the banking world shifted, Emily decided she needed a vacation. A mutual friend connected them, and they ended up sharing a home in Lahaina. One day as they were preparing their favorite foods for friends, the idea struck them “to open a restaurant with all the foods we love: acai bowls, healthful smoothies, and vegan desserts.” With $20,000 saved jointly, and the love and support of friends and family, their dream became a reality in 2011.

“See this?” Kathryn asks, pointing at a huge, stainless-steel commercial refrigerator. “We bought it from a restaurant in Lahaina and pushed it down Honoapi‘ilani Highway with a couple of friends, because we didn’t have a truck to move it. You should’ve seen us!” Laughing, Emily chimes in, “We didn’t even have a glass-front reach-in refrigerator for our grab-and-go food; we borrowed a small apartment-sized refrigerator from a friend and hung a note on it that said, ‘Look inside and see what’s for lunch.’”

As they recollect, the conversation Ping-Pongs. Kathryn: “It was as though we were jumping through flaming hoops, trying to open this place!” Emily: “We ran through our cash so fast, we had to open the doors, even if we weren’t ready.” Kathryn: “If not for friends and family, we wouldn’t have made it.”

Friends cleaned, painted walls, and helped wherever they could until some semblance of order appeared. Two ‘Aipono Awards later — Choice Health Bar as “Best Healthy Food Restaurant” in 2012 and 2013 — Kathryn and Emily still marvel at their crazy feat.

Today, as I enter the buzzing cafe with the inspirational mural of a Renaissance woman falconer, I can’t help but feel that the partners have everything under control. Neither is present, but their employees are patient, knowledgeable and friendly, even though closing hour is approaching and customers of all ages and types are pouring in to get their last healthy-food fix for the day. “Try this new chia brownie,” says the young man behind the counter. “We just made it today. We’re still working on the recipe, but I think you’ll like it.” I bite into the moist sweetness that is full of rich chocolate and crunchy chia seeds and nuts… I’m delighted when I find out later that Emily and Kathryn want to share this recipe with us.