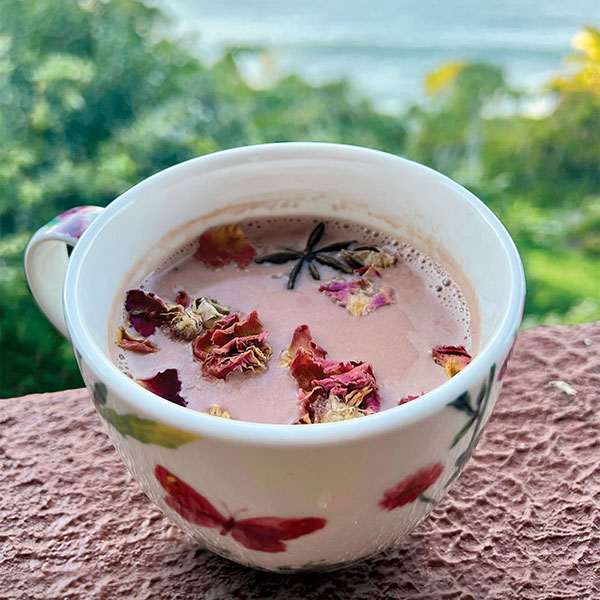 It’s 5:30 a.m. in Kahului. A cool, dark sky threatens rain as chef Khatera Gardizi and I carry bags filled with eggplant, tomatoes, leeks, flour, rice and spices across the parking lot to her health-certified kitchen.

Inside, Gardizi lights a smudge stick and glides through the kitchen. Her black, waist-length hair billows behind her, intertwining with the white sage smoke as she blesses and cleanses the space. Although the Kahului Jodo Mission market doesn’t open until evening, we need ample time to prepare her traditional Afghan dishes.

“Growing up, I ate meat, but I’m vegan and have converted all my recipes [to be plant-based],” says Gardizi as she puts her hair up.

I’ve tasted her food and can attest to the light hand she employs in the kitchen, expertly melding the fresh flavors of local ingredients with spices such as Afghan spearmint, cardamom, coriander and cumin.

Gardizi came to America at age 13 with her mother and younger brother. Her father died in the war during the Russian takeover and her mother qualified to immigrate with her children through a United Nations program for widowed Afghan women.

“My mother worked seven days a week to feed and clothe us, and took English language classes at night,” says Gardizi. Her uncle, who had immigrated to the States years before, worked his way up the ladder from dishwasher to general manager in the hotel industry. “He used to say, If you work hard here, you can have anything you want,” remembers Gardizi.

And work hard she does, balancing a full-time job as an ER nurse at Maui Memorial Medical Center while moonlighting part-time as a chef.

“Why do you do this?” I ask as we put the finishing touches on her dishes. “Isn’t nursing fulfilling enough?”

“[Maui] is a very special place, and I am at a point where I want to give back, not just through nursing, but by nourishing people through food,” she says.

At 3:30 p.m., we load her car and drive to the mission. Gardizi sets up her table of vegan fare and Mason jars of Kashmiri chai in the shade of an old kiawe tree. As the sun sets beyond the sea, diners line up and quickly deplete her table of its wares, leaving nothing behind but a single jar of chai.

Gardizi takes the jar and opens it. “Want some chai?” she asks.

“Sure,” I say, and as we share the drink, Gardizi tells me about the importance of chai in Afghanistan.

“Chai is a part of life, and when you visit friends and family in Afghanistan, you are not asked if you want chai, you are just served chai, and the qisa [talk story] begins,” she says. “Drinking chai is an opportunity to open your mind and heart to possibilities, to address cultural differences or exchange generational stories, to discuss lofty dreams or remember loved ones lost. I feel that every time we share a story, we open up a part of ourselves. How wonderful is that?”

Make Gardizi’s chai recipe for your next gathering of friends and family, and qisa to your heart’s content.

Bring water to a boil in a saucepot. Add tea, cardamom, anise and cinnamon and boil 3 minutes. Add baking soda and boil 1 minute. Strain into a 4-cup heatproof container. Using a second heatproof container, pour tea back and forth 20 to 25 times to aerate; color will change from dark brown to deep maroon. In a separate pot, combine milk and sweetener of choice and place over high heat. Bring almost to a boil, then add tea mixture. Reduce heat to very low, cover and simmer 1 hour. Serve hot or chilled.