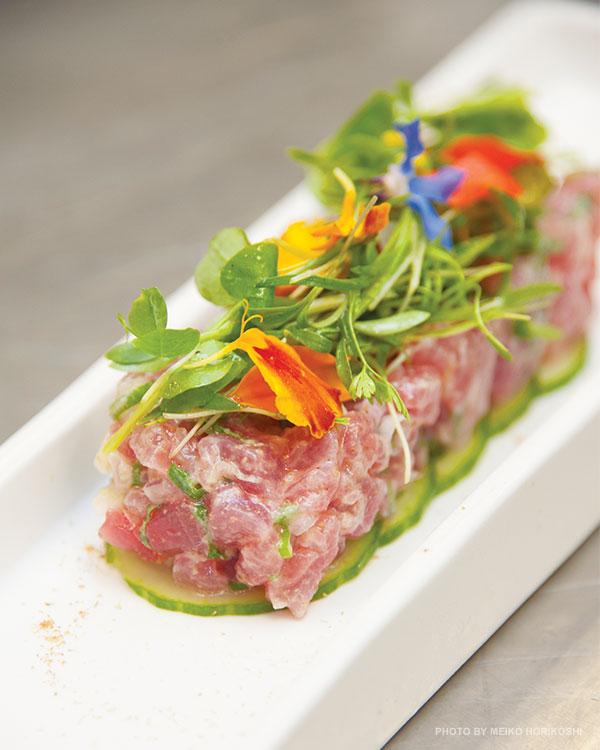 At the age of fourteen, Michael Lofaro worked his first job at a seafood restaurant outside of Providence, Rhode Island. Eight hours a day, five days a week, he peeled shrimp — qualifying him for the title of “fastest shrimp peeler on the East Coast.” A few years later, while he was dining with his parents, a fisherman friend walked up to them and said, “I’m looking for a deckhand.”

Get the Ahi Tartare Recipe

My eyes are as big as quarters as he recounts working on a longline fishing boat off the northern Atlantic Coast. “We’d be gone for two to three weeks, 500 to 700 miles offshore on a flat, calm ocean. And other times, we’d be in twenty- to thirty-foot seas. The boat I fished on was the smallest boat in the fishing fleet, fifty-six feet long, named The Little One.”

We’re in the kitchen of the Grand Wailea’s Humuhumunukunukuapua‘a restaurant as Chef de Cuisine Lofaro preps sixty pounds of ‘opakapaka fillets for dinner service, easily running his razor-sharp Japanese Kikuichi knife through the pink flesh. He continues: “I was pulling in a huge swordfish, and just as I grabbed it by the mouth to pull it onto the boat, the biggest mako shark I’ve ever seen came straight up out of the water, and as we made eye contact, the shark took the fish’s body in its mouth in one bite, leaving me with two inches of fish in my hand.” The job gave Lofaro enough eye-popping stories to last a lifetime.

A graduate of the prestigious Culinary Institute of America, he says, “I still use little tips and techniques from the school chefs. Nothing can replace a good educational foundation. It has opened lots of doors for me.”

During a culinary internship under famed Chef Michael Mina of Aqua (later Michael Mina Restaurant) in San Francisco, “I got my butt kicked,” Lofaro says, “but I loved the restaurant environment. I went back after I graduated and stayed three-and-a-half years.”

He worked New York’s  culinary circuit, and from 2005 to 2007, served as executive chef at the four-star Mill’s Tavern in Rhode Island. Then Maui beckoned.  In 2000, Mina had sent his former protege to the island to open a restaurant at the Grand Wailea. That venture didn’t materialize, but Lofaro’s time there helped him land a position at the Grand Wailea in 2008.

“We work our kitchen with five very hard-working and talented chefs,” Lofaro adds. “We have a solid crew at Humu — front and back of the house.” American contemporary food, a blending of many ethnic flavors, is Lofaro’s niche. As he trims a stack of aojiso (Japanese green shiso) into perfect squares, then cuts it into perfect julienne, I know I’m in for a great ‘ahi tartare tasting.

Get the Ahi Tartare Recipe