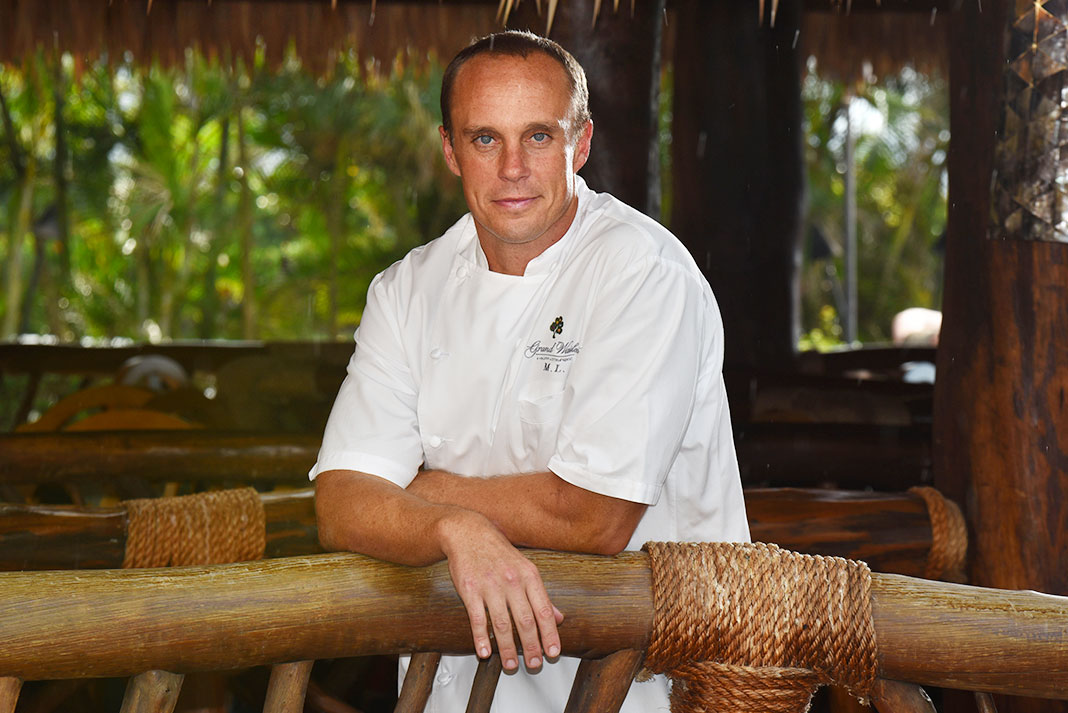 It’s six-thirty in the morning and Chef Michael Lofaro, in surf trunks and a wide-brimmed hat, is pulling a state-of-the-art ocean kayak into the surf. Effortlessly, he throws his legs over and into the well and begins paddling. He’s fishing, and has known since his teenage years, when he worked on a fifty-six-foot commercial fishing boat in the Atlantic Ocean, that the early bird catches the uku (gray snapper). 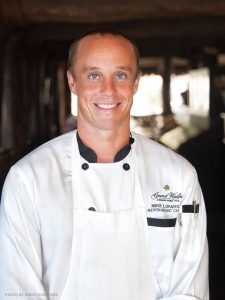 As I watch him crisscross the glassy cerulean waters off Kīhei’s shore, I get “chicken skin,” remembering the eye-popping story Lofaro told me in 2015: “I was pulling in a huge swordfish [off the coast of Maine], and just as I grabbed it by the mouth to pull it onto the boat, the biggest mako shark I’ve ever seen came straight up out of the water. As we made eye contact, the shark took the fish’s body in its mouth in one bite, leaving me with two inches of fish in my hand.”

Lofaro continues to share his experiences with guests at Ka Malama dinners at the Grand Wailea Resort’s Humuhumunukunukuāpua‘a restaurant, a series inspired by the Hawaiian moon calendar. He calls it “a journey within a journey,” part of his quest to capture the cultural essence and lifestyle of days gone by, when life was harder, but simpler. Honoring the Hawaiian culture has earned him the respect of industry peers. With veracity and years of practiced kitchen skills, Lofaro unleashes a creativity that awes fellow chefs with dishes such as akule (scad) stuffed with wild honohono grass, and or fresh Maui uni (sea urchin) frosted with kaffir-lime shaved ice atop a pale pink slice of uku (deep-sea snapper) in a delicate butterfly ginger-yuzu broth.

Lofaro and Kainoa Horcajo, Grand Wailea’s Hawaiian cultural advisor, costar in KHON TV’s Search Hawai‘i show, foraging in pristine forests, rocky black-lava bays, and the deep ocean to harvest ingredients for Ka Malama. Each course contains one or more elements of the hunt; each dinner, held once a quarter, elicits excitement from guests who seek a once-in-a lifetime dining experience.

Lofaro returns to the shore, his blue eyes smiling as he holds up a beautiful gray snapper he’ll prepare for dinner tonight for his family. Happily, most other nights, the rest of us can enjoy the great fare Chef Mike creates at Humuhumunukunukuāpua‘a.

“I have only known Mike as a chef for a short time, but every time I am involved in events with him, he continues to impress me with his humbleness and sense of self, and an incredible imagination using our local bounty. Mike is taking our farm-to-table cuisine to an exciting and thoughtful level.”—Ryan Luckey, executive chef, Leilani’s on the Beach

“Chef Mike is not only extremely talented, but is passionate and continues to strive to be creative. He is definitely one of the leading chefs on Maui’s food scene.”—Jeff Scheer, chef, The Mill House at Tropical Plantation and 2015 ‘Aipono Chef of the Year.

“Innovative yet humble, [Mike] has a keen, ever-searching creativity which connects his plates to this beautiful place with [its] rich food culture. Mike rocks!”—Jana McMahon, chef-owner, Maui Private Chef