A Wine Column by Charles Fredy 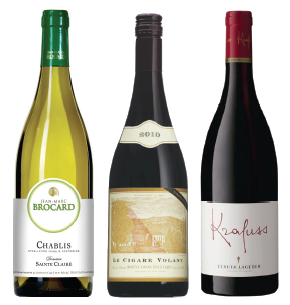 Many people know Rudolph Steiner as the nineteenth-century architect, social reformer and philosopher whose principles formed the basis of Waldorf education. But did you know that Steiner also helped establish the foundation for biodynamic wine? Or that his advice included packing crushed quartz into a cow horn and burying it in the field? Or, for that matter, what “biodynamic” means?

Like organic farming, biodynamic agriculture avoids the use of pesticides and genetic engineering. Biodynamics takes the concept further, working to create ecological self-sufficiency and harmonize with nature. An avid experimenter, Steiner explored different ways to enrich the soil for planting, employing manure; plants such as stinging nettle, chamomile and dandelion flowers; and, yes, crushed quartz in cow horns, which he advised burying in the fall, digging up in the spring, and adding the crushed quartz to a mix for spraying on the fields. The idea of burying something in the ground and then bringing it back into the light echoes fertility rites as old as the Egyptian god Osiris, and references the holistic idea of putting what remains of one year’s crop back into the soil to nourish the next.

It’s also the idea from which the use of compost derives; vintners who follow biodynamic practices find that seed pumice left in the vat after fermentation makes a natural fertilizer. Producers such as Grgich Hills and Robert Sinskey use biodynamics to produce exciting wines that are as close to nature as possible.

And here’s a surprise: Among the winemakers I have spoken with, many, like Randall Graham of Bonny Doon Vineyard, say that biodynamic practices increase the land’s ability to express its unique flavors and components in the wine — enhancing its terroir. The result is a wine that speaks of its place, that has its own distinctive signature.

So, while some people scoff at biodynamic practices, those who use them to create the best possible wines find vindication in the results. Who’s to argue with world-class producers like Maison Chapoutier in the Rhone Valley; Domaine Zind-Humbrecht in Alsace; Nicolas Joly in the Loire; Dujac, Lafon, Leroy, or Domaine de la Romanee Conti in Burgundy — all among the elite in the wine business, and all using biodynamic farming.

Here are some others:

Got a wine question? Contact Charles Fredy at facebook.com/ChambersWinesHawaii

What’s Your Taste in Wine?

Make this fun cocktail to celebrate 2022, the Year of the Tiger, or simply to ring in the weekend!