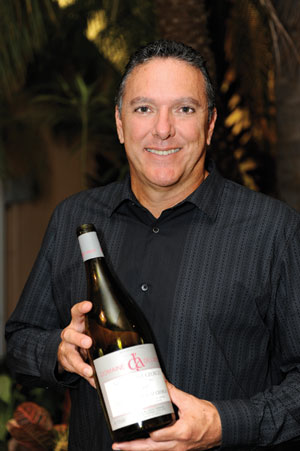 If you like to entertain, and you enjoy wine, a blind tasting is an engaging way to share these pleasures with friends, without intimidating those who don’t know much about wine. It’s not about evaluating the tasters, but helping them become more perceptive and appreciate the qualities in any wine.

A blind tasting is a detective game; you use your senses of sight, smell and taste to search for clues to the wine’s vintage, varietal and place of origin. The difference between the training-wheel blind test, and the professional version, is how detailed you get in describing the wine. In either case, for the clues to lead you to the right suspect, you’ll need an understanding of what the world’s classic wines taste like. If you’re new to this, a beginner’s wine course is a good place to start. Both the Society of Wine Educators and the Court of Master Sommeliers conduct a variety of courses and webinars. You’ll find details at SocietyOfWineEducators.org and MasterSommeliers.org.

Next, as in any good detective story, you’ll want to set the scene. 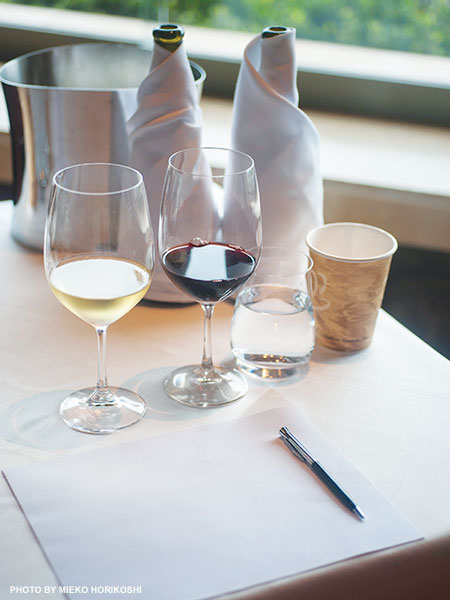 1. A well-lighted area. Sight is a critical aspect in deducing the wine: Is it bright and clean, murky with particles, clear or opaque? Does it have rings of color that might indicate age?

2. A white tablecloth or other white background (even simple copy paper) that lets the true colors of the wine come through.

3. At least two quality crystal glasses, such as those made by Riedel, Eisch, or Spiegelau, for each participant. (If you don’t have crystal, be sure you have glasses that are clear, without any cut edges, design or writing on them that can distort or diminish the view of the wine.) You’ll be pouring two to three ounces of wine, but each glass should hold at least twelve ounces; you need room to spin and aerate the wine. A typical glass for white or red wine works well, as opposed to a large, bowl-shaped glass that allows the aromas to escape. Smell the glassware before you pour the wine and make sure you can’t detect the cardboard it came in, nor any detergent or chlorine. After each new wine, rinse the glass with water and let it drain well to avoid diluting the wine.

4. Individual spit cups. These can be colored glass, a to-go coffee cup, anything in which the contents aren’t visible. You’ll also need a “dump bucket” to empty both the spit cups and any wine that isn’t drunk. A deep bowl or wine bucket is fine. Except for anyone who will be driving, spitting is optional, but advisable: As you drink, fatigue sets in, diminishing your ability to taste.

5. A means of obscuring the bottles. A bottle’s shape can give clues to the wine inside. For example, a long, narrow bottle often indicates a riesling. So when you pour, ask guests to close their eyes, or cover the bottles, or put them in large bags that disguise the shape. 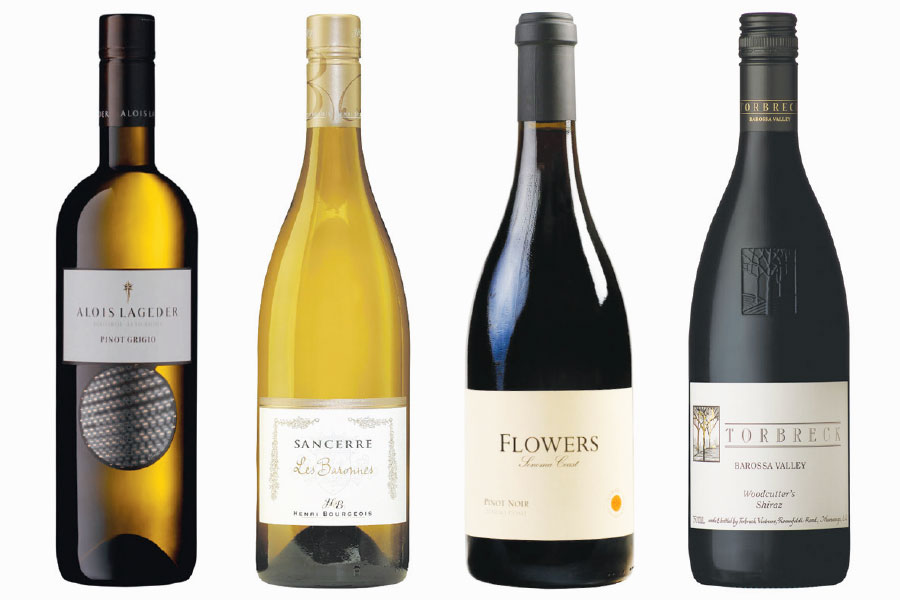 Unless your guests are oenophiles, I recommend starting with three whites and three reds. That gives you enough variety to have fun with, but not so much that the participants feel overwhelmed. Consider presenting a selection that’s half Old World wines, half New World, and exploring the differences among them. For example: 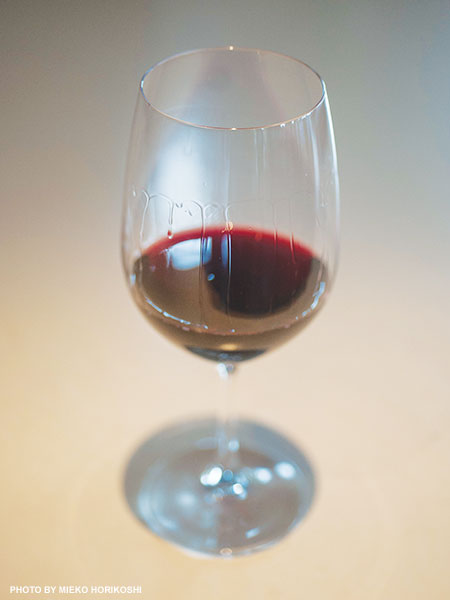 Blind tastings are often done in flights. Each guest gets two glasses, and the host pours a different wine into each — two whites, two reds, or one of each. Everyone looks at, smells, tastes and evaluates (or identifies) the wines. Then on to the next flight. If you want to try the true somm flight, pour three whites and three reds, and have your guests assess all six wines in twenty-five minutes.

We begin our deduction with sight, assessing the intensity of the wine’s color, its viscosity, and whether it’s clear or sedimented. Is there variation in the color? Over time, colors oxidize, and so, like the rings of a tree, layers of color in a wine indicate its age. Whites tend to darken. A young chardonnay that’s moderately golden will deepen as it ages, going from straw to amber to brown. Reds do the opposite; they may start out a ruby color, fade to garnet, then orange. If the wine is one concentrated color, most likely it’s younger wine that hasn’t had time to create those striations of color.

New World wines tend to be brighter and clearer than those of the Old World (though there are many variables). Old World red wines are often less clear, because they’re not filtered as much.

Once you’ve had a look, swirl or roll the glass on its side so the wine coats the whole interior, then set it upright and let it sit for about ten seconds. As the wine flows back down, watch how quickly the little trails of wine, its “legs,” move down the glass, how thick they are, and how they’re colored. Faster legs mean the wine is less viscous; possibly containing less sugar and alcohol. Slower legs may indicate more viscosity, higher sugar and alcohol content. Knowing the wine’s viscosity helps us deduce the climate its grapes grew in. In a cool, wet climate like the Loire Valley, the grapes will likely be picked when they’re not as ripe; they’ll have less sugar and alcohol, and produce a leaner wine. In warm, sunny California, the grapes will ripen longer on the vine, producing more sugar content and alcohol — and a thicker wine. Of course, like any good detective story, this one has its red herrings. Sometimes wines are manipulated in the cellar to concentrate the grapes; the higher alcohol content will come from the winemaking, rather than from the climate. 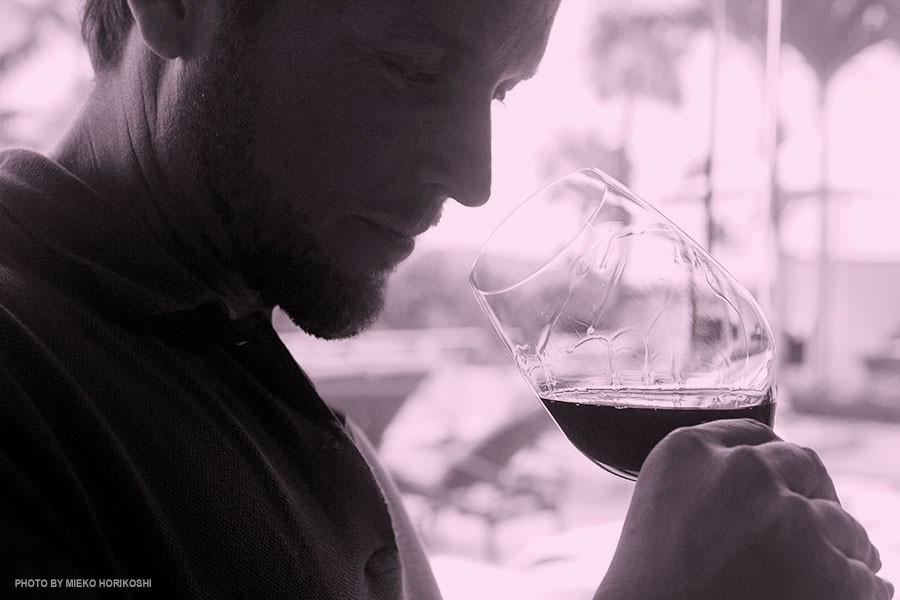 To sniff out our next clues, we turn to our amazing sense of smell, which is far more perceptive than its partner in crime, our sense of taste. (According to the American Academy of Otolaryngology, we “taste” many flavors, including coffee and chocolate, primarily through smell.) And because the regions of the brain responsible for smell and memory are close to each other, the nose is a sort of memory bank. For me, the smell of black pepper and earth marks a wine from the northern Rhone region, while the scent of chalk or a wet-cement smell conjures Chablis.

Your sense of smell is why you can identify many flavors in a wine that your taste buds have never come near. Most people don’t go around licking a barn or a forest floor, but if you know their smells, you can translate them into tastes.

Sommeliers use the acronym FEW (fruit, earth, wood) to indicate three important clues to identifying a wine. Red wines generally have a bouquet of black, red or blue fruit; whites have apple, pear, stone, citrus or tropical fruit. Earthy tones include mushroom, minerals, chalk and seashells, and speak of the terroir of specific regions.

Butterscotch, cinnamon, clove, chocolate, dill and toast are all wood markers, telling you the wine has lived in a barrel rather than a steel container. (Sawdust and dill are both strong indicators of American oak, often used to produce California zinfandel and cabernet, Australian shiraz, and Spanish reds.) A wine with a strong wood element likely aged in newer barrels, which are very expensive. Some winemakers don’t spend that kind of money, so if you taste a lot of wood, you can eliminate many wines from your list of suspects, as well as wines that don’t use wood in the aging process.

On the Tip of Your Tongue

Just as Sherlock Holmes relied on Watson to help him solve cases, the nose — for all its deductive prowess — needs the tongue to confirm, deny, or add to the evidence through the taste buds’ ability to detect bitter, sour, salty and sweet. Often, if a wine smells fruity, but tastes sour, it leans toward being an Old World wine. If it tastes as fruity as it smells, it’s likely New World.

Taste can narrow the list of suspects much further. For example, the strong, bitter, drying sensation that black tea leaves on your palate is the feel of tannin — one of the factors, along with alcohol, sugar and acidity, that create the structure of a wine. The nebbiolo grape of Barolo, in Piedmont, Northern Italy, always has medium-plus to high tannin. If you don’t detect a lot of tannin in the wine you’re tasting, it’s not from Barolo — even if other factors lead you in that direction.

Conducting a blind tasting with friends can be a whole lot of fun. It also sharpens your ability to sleuth out the character and quality of a wine by forcing you to rely on your senses, rather than preconceptions you may have about a wine’s cost, region or varietal. As your understanding grows, so does your enjoyment of wine and your success in pairing it with food. 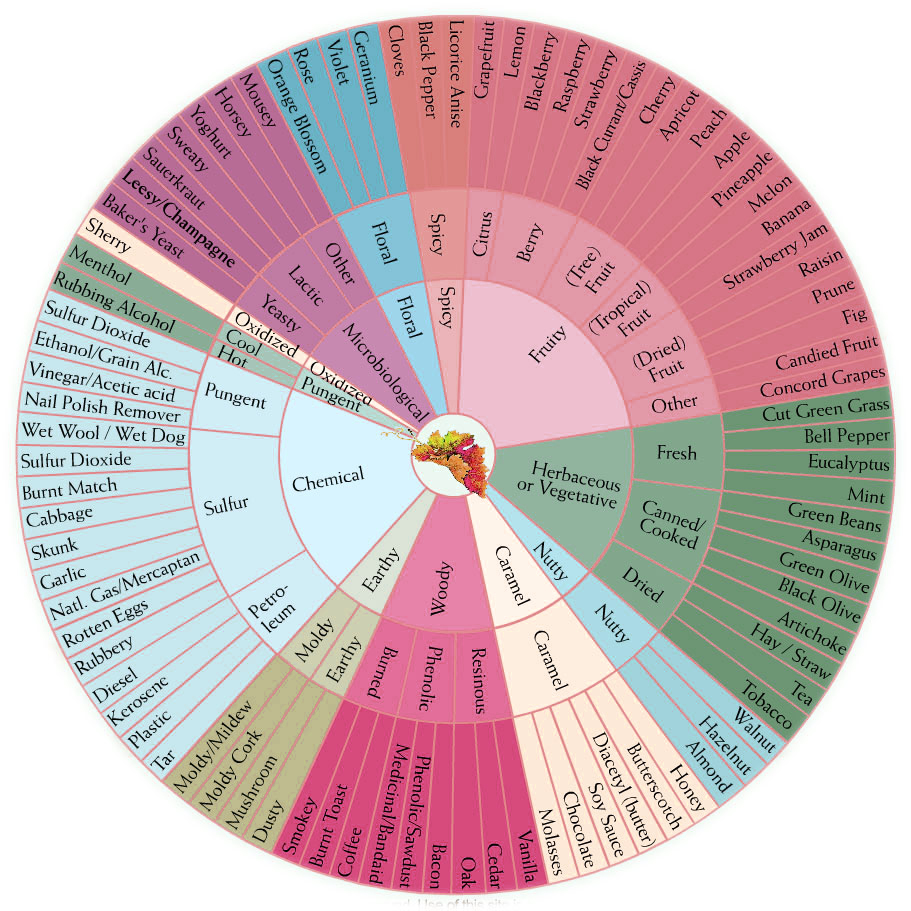 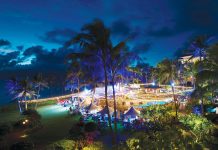 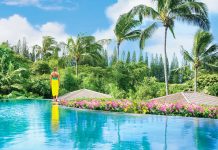