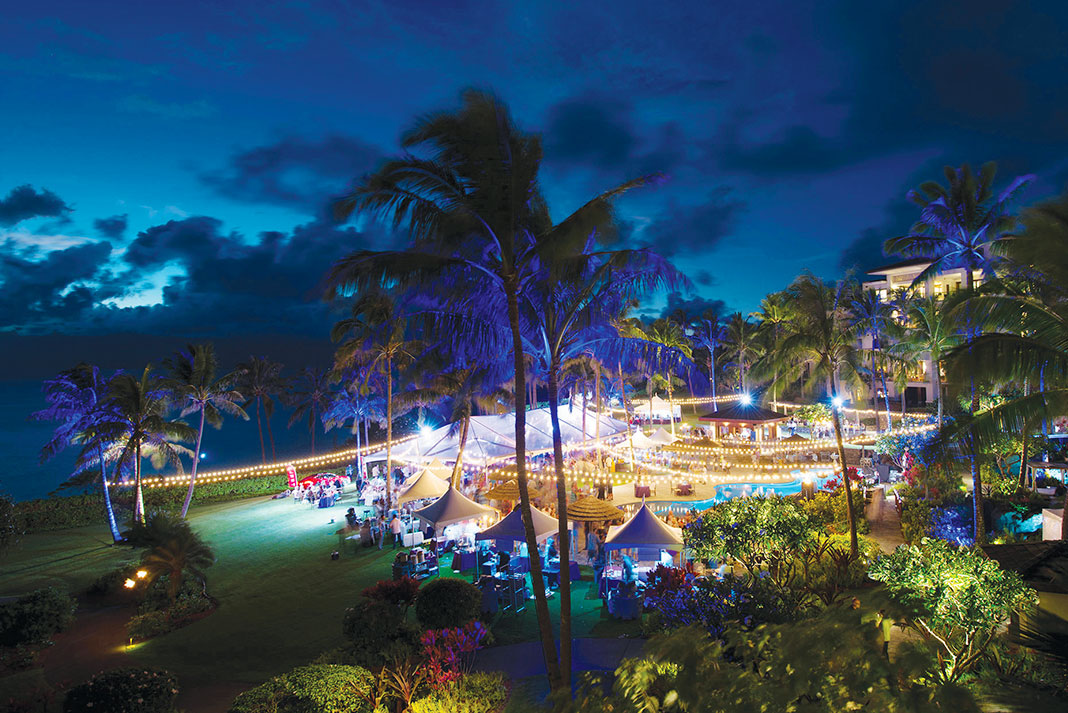 As humorist Dorothy Parker once noted, “Men seldom make passes at girls who wear glasses.” But girls who fill glasses? That’s another story. Parker herself was fond of imbibing, and would no doubt applaud a woman like Heidi Barrett, who made history in 2000 when a six-liter bottle of her ’92 Screaming Eagle wine sold at the Napa Valley Wine Auction for $500,000.

Barrett is one of the notable winemakers you’ll meet at the 2016 Kapalua Wine and Food Festival, being held June 9 through 12 at The Ritz-Carlton, Kapalua. And she won’t be alone. Master Sommelier Michael Jordan is assembling a panel of women winemakers for a talk and tasting he’s titled “Women of the Vines.”

“Many of today’s exceptional wines are crafted by women winemakers who have a fabulous sense of flavor and create wines of great balance, finesse and style,” he says. “I predict that very soon there will be as many great women winemakers as men.” (Jordan hopes the panel will also encourage spinoffs to bring in more women chefs.) “It’s not a competition,” he adds, “just gifted people making delicious wines.”

Jordan is lead sommelier for the thirty-fifth annual Kapalua Wine and Food Festival — one of the longest-running festivals of its kind in the U.S. — and his joie de vivre is both legendary and infectious. So is his pedigree: his godfather was Frank Sinatra. His dad and Frank were best friends, as were his grandmother and Old Blue Eyes’ mom. Back in the sixties, Jordan Senior opened the famed Italian restaurant Matteo’s in Los Angeles.

“Frank would come into the restaurant four nights a week. That,” (and the delicious food) Jordan tells me, “is what made Matteo’s the celebrity hangout it was.” In the 1970s, a second and equally respected Matteo’s opened in Waikīkī, which is how Jordan happened to grow up in the Islands. (The Waikīkī restaurant sold in 1984, and only recently closed.) Combine Jordan’s love of food, celebrity family life, and deep “local boy” appreciation for Hawai‘i, and you have the core ingredients that created the man known within the food-and-wine community as “sommelier for the people.”

“In celebration of the thirty-fifth year, we’ll be going international,” Jordan says. And that means, you guessed it, Italian is on the list. “We are excited to have Chef Michele Mazza from Il Mulino, one of the greatest Italian restaurants in New York. And we are bringing in exquisite Italian wines to pair with his food.”

Also coming this year is celebrity chef Hugh Acheson from Texas, whom you may recognize as both a competitor and judge on Bravo TV’s Top Chef Masters. Chef Mazza and Chef Acheson will wow us with two cooking demonstrations, including lunch with paired wines chosen by host Michael Jordan. Wine dinners are also being planned.

The food is out of this world, but what we really come to the Kapalua Wine and Food Festival for, as Jordan says, is “the wine and the people who make it.” Among his favorite panels is “Family Tree: Scions of Family Wineries,” scheduled for June 11. Second- and third-generation winemakers will share stories, wines, and perhaps a few family secrets. “We have father-and-son legends Tim and Carl Mondavi of Continuum, Larry and Christopher Hyde of Hyde & Sons, and Robert and Brandon deLuze of ZD Wines. This is the family tree of the divine,” Jordan emphasizes. “These guys embody the passion that goes into artisan winemaking.”

Another of Jordan’s “not to be missed” panels is the cabernet sauvignon retrospective. “We’ll compare wines from a decade ago with their current release,” Jordan says, then explains, “As the tannins and pigment settle, the wines grow softer, more elegant, with wonderful truffle and cigar-box earth tones. Ten years is about when they peak.”

Jordan is one of just 129 master sommeliers in North America, and one of only 15 people in the world to hold both Certified Wine Educator and International Court of Master Sommeliers diplomas. He also won Wine Enthusiast’s highest honor, the Award of Ultimate Distinction, from 2004 to 2009. Today Jordan continues his reputation for excellence as director of global key accounts for Jackson Family Fine Wines.

When asked what he sees as the future for the festival, Jordan doesn’t skip a beat. “I hope it continues in the direction it’s going, because it truly stands apart with island warmth and aloha. This festival belongs to everyone in attendance; there’s no separation of guys up on the stage and others in the audience. We mix and mingle with true Hawaiian hospitality. Maui is family.”

We hope you won’t miss the Kapalua Wine and Food Festival. Maui Nō Ka ‘Oi will be there, once again hosting “Best of the Fest” at the Sunday-night grand finale, the Seafood Festival. For information and schedule, visit KapaluaWineAndFood.com.