If phrases like “forward on the berries,”  “seductive mouth feel,” and “plush and spicy” make your taste buds whoop, you are in for a treat. The Kapalua Wine and Food Festival is bringing together some of the most famous and influential winemakers, chefs, and sommeliers known to earthlings, June 7–10 at Kapalua Resort.

The Kapalua Wine and Food Festival, now celebrating its thirty-seventh year, is the oldest and one of the most respected festivals in the U.S. But don’t confuse that pedigree with stuffy. Enter lead Master Sommelier Michael Jordan, aka “sommelier for the people,” and ratchet up the fun factor. “We’re all about creating the good hospitality vibe,” Jordan tells me. “At Kapalua, the celebrity winemakers and world-famous chefs are all so approachable— guests have real face time with them. That’s a huge difference from other wine festivals.”

Jordan is not without his own pedigree. Director of global key accounts for Jackson Family Fine Wines, he is one of only fifteen people in the world to hold both Certified Wine Educator and International Court of Master Sommeliers diplomas. He also won Wine Enthusiast’s highest honor, the Award of Ultimate Distinction, 2004 through 2009.

Joining Jordan’s team of master sommeliers is island-born and -raised Patrick Okubo (once the youngest master sommelier in the U.S.), and Rob Bigelow, who, like Jordan, lived in Hawai‘i for part of his childhood. “These are people who love Maui,” Jordan explains, “and understand the island lifestyle of family, friends, and sharing.  We’re not there to officiate, but rather to facilitate the panels, and to keep a homegrown atmosphere in which everyone can learn a little, taste incredible wines [many available only at the festival]and have a lot of fun doing it.”

The likely highlight this year is the World Famous Pinot Noir seminar and tasting (June 10, 3:30–5 p.m.), which truly lives up to its name with iconic stars Michael Browne (a founding partner of Kosta Browne), now representing his own label, CIRQ.; Jeff Mangahas of Williams Selyem Winery; Jeff Stewart of Hartford Court Winery; James Hall from Patz & Hall; and Nico Cueva, the current winemaker at Kosta Browne. These winemakers are gifted,” says Jordan.  “To be at this seminar and taste some of the best wines in the world is a real treat.”

To give you some indication of just how special, many of these wines have a waiting list of two or more years. CIRQ. has a waiting list of three to four years—no kidding. I was lucky enough to speak to Michael Browne about CIRQ. and his style of winemaking. “CIRQ. is all about the hands-on commitment that comes with a highly crafted wine. If we try to grow the business too fast, our consumer won’t get the quality they deserve,” Browne explains. “It’s tricky with pinot noir, because it’s so delicate. But the payoff is that it’s so delicious when picked at peak ripeness. You can’t deliver that ripeness unless you grow it yourself.”

Browne grows pinot noir in two locations in the Russian River Valley: Treehouse, which first produced in 2011, and Bootleggers Hill, which began in 2013. “Each vintage has its own fingerprint,” he says. “Treehouse is windier and warmer; the iron-rich soil has a low pH and higher acid, resulting in intense, crispy fruits, deep flavors, and a beautiful crimson color. Bootleggers is cooler, and its soil is predominantly Goldridge—light, sandy loam over fractured sandstone—which produces fruit that is more plush, soft and spicy, with a slightly more seductive mouth feel.”

Each vineyard has its trademark. So does each winemaker. For Browne, it’s all about the passion and pleasure wine brings to its audience—something he learned in the circus! “I joined the Wenatchee Youth Circus when I was twelve years old,” Browne says. “I learned a lot about failure and risk, lessons that stuck with me as an entrepreneur. I named our wine CIRQ. to pay homage to people who, through their professional lives, bring pleasure to others—whether it’s art, or food or anything else.”

While World Famous Pinot Noir draws legendary winemakers, Jordan is also excited to bring new talent to the festival. One is Jill Russell from Cambria Estate Vineyard and Winery, who will be presenting at the Sand & Fog panel (June 8, 12:30–2 p.m.), showcasing wines of the Santa Maria Valley.

“Santa Maria has the longest ripening season in the country,” says Jordan. “Jill is a rising star who truly understands the region.”

“I’ve been in love with Santa Maria Valley since working with Bien Nacido Vineyards at my first job out of college,” Russell said in a recent interview. “As the valley heats up, the transverse mountain range creates a sort of funnel, moving the cool coastal breeze and fog into the valley, creating the best growing conditions for chardonnay and pinot noir.” [Jordan calls it “refrigerated sunshine.”]

Russell has been making wine on California’s Central Coast for ten years; she joined Cambria in 2017. “I’m excited to work at an estate winery, where multiple years of vine age, some dating to 1971, provide great blending components for our Julia’s Vineyard Pinot Noir and Katherine’s Vineyard Chardonnay.” What excites Russell most is her first wine with Cambria, “a rosé made with intent. I wanted to have bright acidity and texture in the wine, along with strawberry and grapefruit notes. I’m happy how well it’s been received at recent tastings and excited to share it at Kapalua.” Don’t miss your chance to try it. 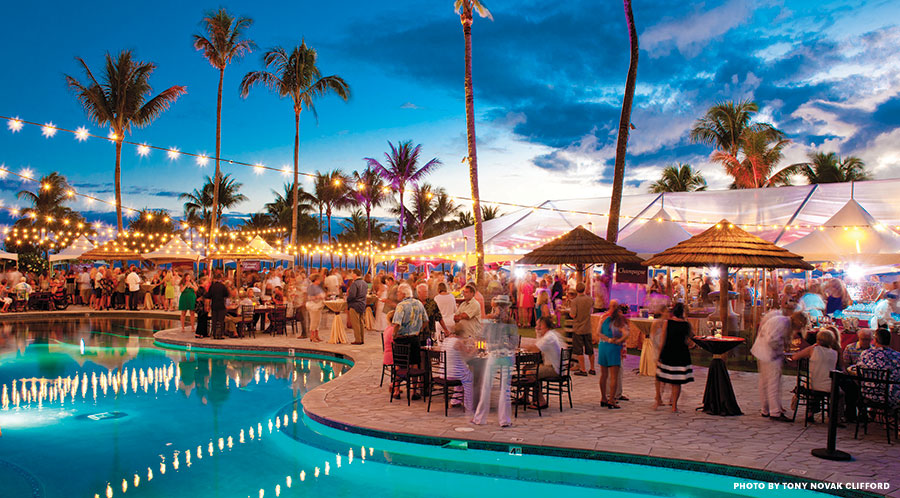 And please, don’t miss the food.

Chef Mark Tarbell, of Tarbell’s in Arizona (and Iron Chef America fame), is the festival’s Celebrity Chef host. Tarbell and his restaurants have won more than fifty city and industry awards, including “Best Restaurant” from Food & Wine magazine.

And Maui Nō Ka ‘Oi will once again host Best of the Fest at Sunday’s Seafood Festival grand finale. Join us. For information on all panels and events, visit KapaluaWineAndFood.com.