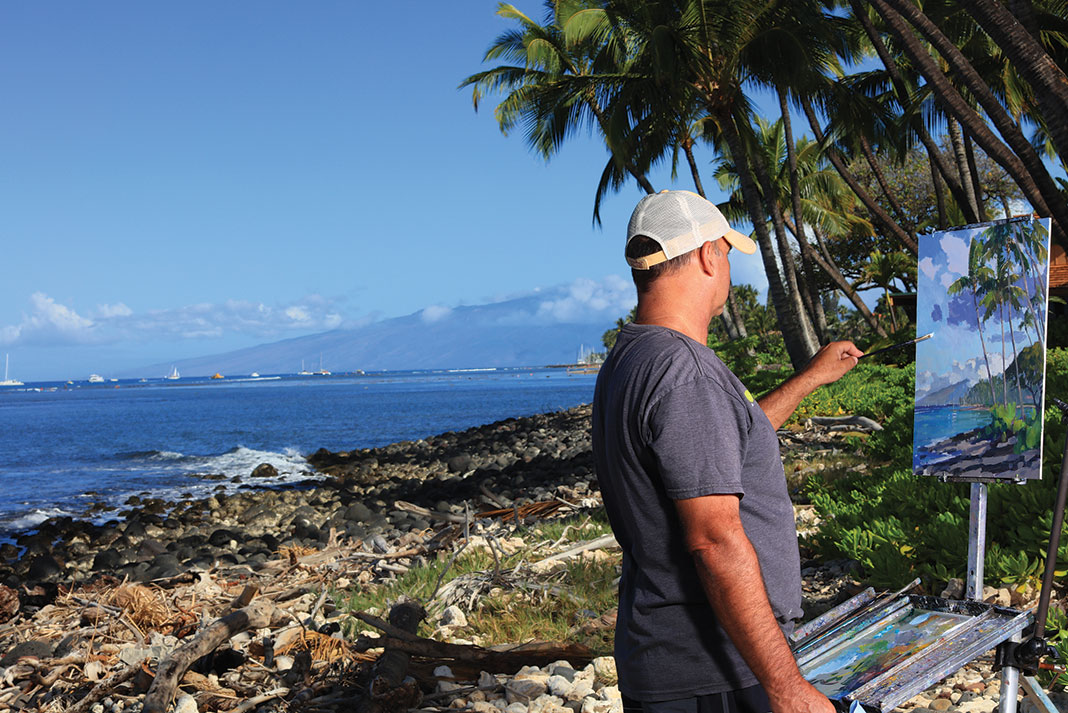 The ocean has always played a major part in artist Ronaldo Macedo’s life. Growing up in Rio de Janeiro on a hill overlooking the Atlantic, Ronaldo would head down on his bike with his surfboard under his arm to Ipanema Beach, where he’d meet his friends at the spot they called “Garcia’s.”

“All my memories of Rio are of beaches, boats and surfing,” he says.

From Rio to Redondo Beach and the surf breaks along the southern California coast, Ronaldo made his way to Lahaina in 1994. “I came to surf and stumbled onto the art scene here. I met [longtime Maui artist] George Allan, and my life took a different course. I started painting outside. That’s what’s so appealing about plein-air [painting outdoors], you don’t have to be at a desk.”

Ronaldo had a gift for drawing from an early age, and his family’s move to Los Angeles during his high school years led him to pursue a degree in illustration at Long Beach State. After graduation he began river guiding in northern California. “Being on the river was such a big dose of nature and water. I kept my sketchbook in a dry box, and whenever I had down time I would draw.”

Even after moving to Maui, Ronaldo traveled for river excursions. “I’d raft [all] summer, then return to Maui to paint and surf. Every time I left, my inventory would get low and the gallery would say that they wanted to replace me with another artist, so I got the memo.”

By 1998, Ronaldo was a full-time Maui resident, and good thing, too, because that’s when he met Jennifer, whom he would marry. “She came to Maui to learn to surf. She was a snowboarder, so she was a natural. I met her surfing at Lahaina Breakwall and, well, you know,” he says, smiling. By 1999 they had bought a place in Puamana, and in the fall of 2000, had their first child, Summer. “Once you buy a house and have a kid, painting is not a luxury anymore, it’s a job. George Allan told me once that you got to paint a hundred paintings a year, so that’s what I shoot for.” 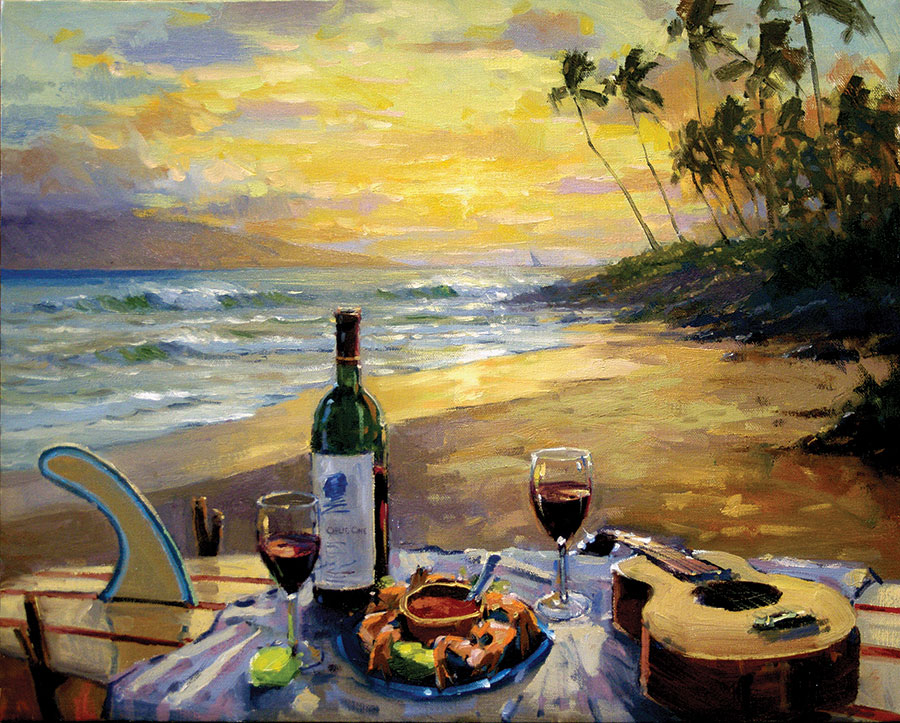 We talk several times. Once, Ronaldo calls me while he is driving to Ironwoods, a surf break just north of Kapalua, where eighteen-year-old Summer is training. Ronaldo likes to watch from the beach so he can give her feedback—where she’s hitting the wave, if she’s getting enough power and speed. He first took Summer surfing when she was two, and her brother, Ocean, who is two years younger, when he was one and a half. “We were able to surf a lot in front of our house. I did paintings of them. I surfed with them.” Over the years, the kids graduated from Puamana to Lahaina Harbor and eventually Honolua Bay. Soon it became all about surfing. Jennifer would pick them up after school at two, and they’d surf until five. Ronaldo remembers, “I’d be really jealous because I had to work/paint, and they would get to go surf. I think their love for the ocean is because they were nurtured by the ocean. The beach was our front yard; it was our playground.”

It still is. Summer holds one state title, two national titles, a junior world title, and in 2018 was selected as a wild card for the World Surf League’s Women’s Championship Tour event at Honolua Bay. Ocean, who has one national and two state titles, qualified for WSL’s Junior World Championship in 2018. Ronaldo is every bit the proud father. Although he no longer competes, back in the day Ronaldo entered longboard events and Hawaii Surfing Association contests at Breakwall and Ho‘okipa. “You should see our house,” he says. “It’s full of boards.” It’s also full of trophies.