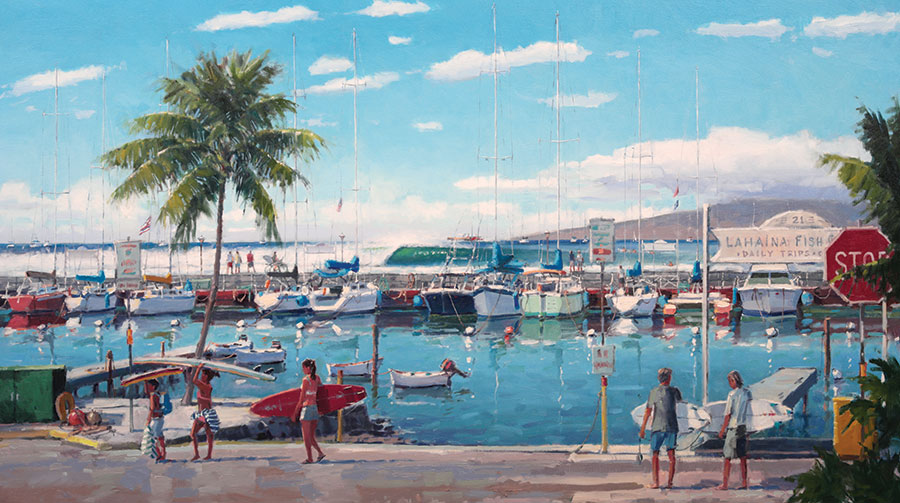 Inside his studio on Dickenson Street, Ronaldo shows me stacks of studies. As I look at these three-by-fives of ink on paper, and oil brushed on squares of canvas, a Picasso quote comes to mind: “Painting is just another way of keeping a diary.” For Ronaldo, painting is a journal entry, a way of recording a memory. “Here’s one from Australia.” He holds a study of a rocky coastline with an ocean pool. “See that beach in the background?” He runs his finger along a hue of sand. “That’s Kiama, where Summer and Ocean competed. And here’s one from Turtle Bay, from 2017, at the Junior Pro Event.” Every study is associated with a time and place, and often a reference to his children. There are black bound sketchbooks, too, one from river trips in 1994, and in a later journal, circa 2001, a pen-and-ink sketch of his then-infant daughter sleeping.

The first surfboard Ronaldo ever painted was one of Ocean’s that “buckled, folded” when he was surfing Sunset Beach. “For a long time, Steve Kemper, who works at Lahaina Galleries, kept bugging me about it, ‘When are you going to paint on a board, Macedo?’” A senior art consultant, Steve is also the father of Billy Kemper, Big Wave World Tour champion and frequenter at Jaws, Peahi.  Finally, when Ocean offered up his board, Ronaldo painted a scene from Puamana, “Tropical Days.” He’s now on his fourth surfboard painting.

If there’s one painting that defines Ronaldo’s feelings about his family and his art, it’s “Macedo Family Surf Sesh,” created in 2010. “The kids were little, and they were all going to go surf at Shark Pit. I got my stuff and set up and painted there. It’s a day I remember so clearly.” And it’s a painting that so clearly reflects how well Ronaldo balances work and family, painting and surfing, always dancing with a brush or board at the ocean’s edge.