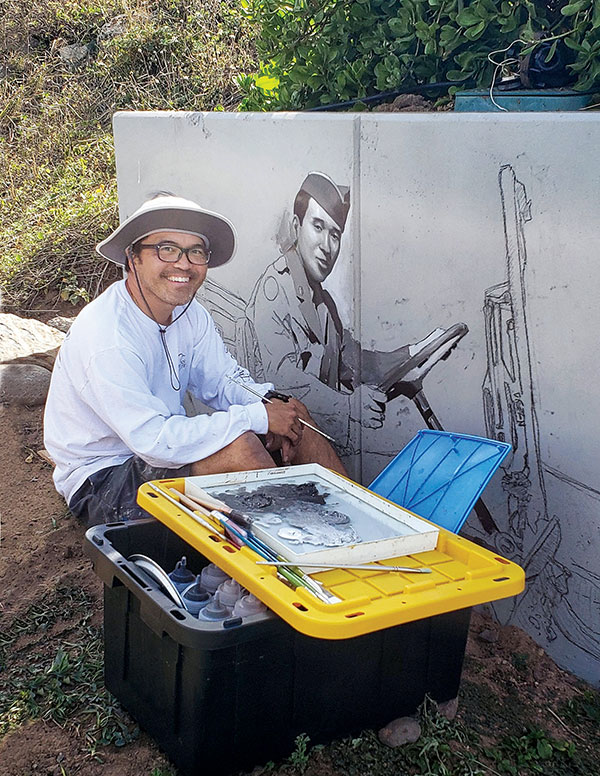 When the Nisei Veterans Memorial Center opened in Kahului in 2006, a blank concrete retaining wall bordered one end of the property. No one thought of it as a canvas — until Maui artist Kirk Kurokawa came along.

The NVMC honors the nisei (second-generation Japanese-Americans) who served in the U.S. Army in the wake of the attack on Pearl Harbor. Even as their families were being sent to internment camps, these young men strove to prove their loyalty by enlisting. Reluctant at first, the Army created the all-Japanese-American 100th Battalion, and then the Military Intelligence Service, 1399th Engineer Construction Battalion and 442nd Regimental Combat Team — the most decorated unit of its size in World War II.

In 2016, Kurokawa found himself in a conversation with Saedene Yee-Ota, an NVMC board member. Moved by her stories about the center, Kurokawa offered his help. “I jumped on the opportunity and asked if he would paint a mural,” Yee-Ota recalls. “He is probably the best modern portrait artist in Hawai‘i.”

An artist herself, Yee-Ota isn’t alone in her opinion. Kurokawa’s paintings have appeared in the Maui Arts & Cultural Center’s Schaefer Portrait Challenge every year since the statewide, curated exhibition launched in 2003. He won its Juror’s Choice Award in 2006 and People’s Choice Award in 2015, the same year then-governor Neil Abercrombie selected Kurokawa to paint his official portrait.

Kurokawa’s largest solo project to date, the NVMC mural took six months to paint — after a year of poring over the center’s archives. “I started learning their stories,” he says. Among their feats: rescuing the “Lost Battalion,” (1st Battalion, 141st Infantry), after German forces surrounded it in France’s Vosges Mountains. The 442nd saved 211 men while suffering more than 800 casualties.

“It humbles you to know these were regular guys from Hawai‘i that did this amazing thing,” Kurokawa says. “I’ve gotten so much more from this project than I gave.”