Beneath a large banyan tree at the Maui Nui Botanical Gardens in Kahului, Ki‘i Kaho‘ohanohano meets with a small group of student healers. Carrying her youngest child in a sling around her chest, she discusses the properties of various plant remedies. She recently advised an expectant mother to harvest and chew hibiscus buds. “Why?” she asks her students. They answer: the buds have a slippery lining that aids in delivery.

Kaho‘ohanohano is a rarity in modern Hawai‘i: a pale keiki (midwife) and kahuna lapa‘au (traditional healer) who draws upon centuries-old wisdom to deliver babies and treat ailments. She didn’t begin her studies at age five, as her ancestors might have in the past—though she does remember watching her great-grandmother treat kidney stones at home with brandy-soaked herbs. Later, as an adult, she learned the healing arts of lomilomi (massage) and lā‘au lapa‘au (plant medicine) from multiple Native Hawaiian cultural practitioners, including Sam Ka‘ai and Papa Kepalino.

For eleven years, Kaho‘ohanohano apprenticed under Tina Garzero, a certified nurse and one of Maui’s best midwives. “After our first ten weeks together, I told her, ‘I’m going to go to nursing school!’ She said, ‘The hell you are,’” laughs Kaho‘ohanohano. Garzero encouraged her to prioritize her traditional training—something academia couldn’t replicate. “I was floored. I thought it would be a good idea to get some skills, learn how to do an IV. She said, ‘No, what you have is so rare. Don’t discredit it.’”

Year after year, Hawai‘i is ranked the healthiest state in the nation—but that doesn’t reflect the status of its indigenous population. Like other marginalized minorities around the globe, Native Hawaiians suffer disproportionately from chronic illnesses such as diabetes, heart disease, and depression. Yet, prior to Western contact, Hawaiians typically enjoyed superior health. Kaho‘ohanohano and her students hope to revive that trend by bringing forward the wisdom of the past. 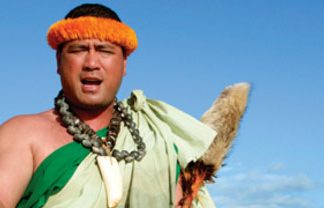 Giving Voice to a Culture

For more than a millennium, Hawaii relied on was an oral culture. It’s not mere chance that the spoken word has regained its importance today.