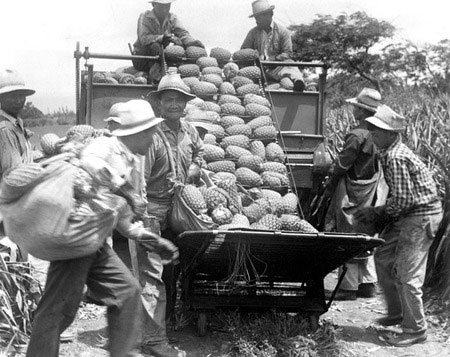 Tall, green sugarcane surrounded our homes as far as my eyes could see. Our camps were separated from one another until harvest time when the fields were completely burned and the clusters of wooden homes appeared naked against the red dirt.

My father and the other men came home after work with dust-covered faces and clothing; only their eyes, protected by plastic goggles, were clean. Thoughts to themselves, they walked silently home on the dirt trail that started from the Bell House up to the stonewall that overlooked a basketball court and Cagasan’s corn patch.

One by one, they peeled off from the trail to roads that led to their homes. They were too tired to talk, or maybe bored, or possibly they missed their families in the Philippines.
—from Spirit of the Village: A Maui Memoir by Jackie Pias Carlin

For Balbino Pias, the good life was a steady paycheck, a clean suit to wear on Sundays, and his wife and daughter near him. This was what he came to Hawai‘i for in 1935, turning from Ilocos Norte to a new life. Pias followed the path laid by the first sakadas—Filipino contract laborers—who arrived here in 1906.

For Pias, and many who came before and after him, Hawai‘i was the promised land of education and steady wages—but it never felt like “home.”

“My father never became a U.S. citizen,” says Jackie Pias Carlin, author of a new book about her childhood growing up in the P¯a‘ia sugarcane camps. “Every year, I had to go pick up a green card from the post office so I could fill it in and return it. His dream was to return home to the Philippines, but he never did.”

His was a familiar story. Between 1906 and 1946, the Hawai‘i Sugar Planters’ Association brought in more than 125,000 sakadas. As the last large group of foreign laborers to arrive in the islands (after the Chinese, Japanese, and Puerto Rican), Filipinos were at the bottom of the metaphoric totem pole. Work in the cane fields was dirty, aching, unending labor. The money was better than in the Philippines, but the Islands’ cost of living was so high that many sakadas finished their contracts with no savings on which to return home.

Their labor helped transform the Islands’ pineapple and sugar industries and shape the economic fiber of Hawai‘i. The sakadas’ strong cultural emphasis on family meshed with and strengthened the existing Hawaiian value of ‘ohana. Their values of hard work and education helped to build foundations for long-term economic growth.

In 1965, the Immigration and Nationality Act allowed workers to send for their families. Professionals, especially those in medicine, were also encouraged to come to Hawai‘i to provide services to the growing population.

Artemio Baxa was a young lawyer working in one of the biggest law firms in Manila. When he told his boss he’d decided to join his father on Maui, his boss said, “If you go to Hawai‘i, you’ll be picking pineapples.”

“When I came here, I saw it was true,” Baxa says. “I had a master’s degree in law, but I could only get a part-time job as a bellhop. For my father to see that must have been hard. He must have been thinking, ‘What happened to that money I spent [on] law school?’”

Baxa did not waste time blaming the system. He worked at various jobs until he earned enough money to go back to school and take the bar exam.

Today Baxa, a retired Second Circuit Court judge for Maui County, is the Maui representative of the Hawai‘i Filipino Centennial Celebration Commission. He has a long record of service as deputy prosecuting attorney, and in 2002, was honored with an “Outstanding Filipino American” Award.

Still, he says the highlight of his career was one of his first jobs here, working as a community aide at Maui Economic Opportunity. “I was able to see how [Maui’s Filipinos] made better of themselves. I was glad to see that a lot of them—working one, two, three jobs—have been able to buy their own homes. In the Philippines, they had such a hard life.”

For the most part, the Philippine countryside was very poor. “My father said they lived off their rice fields and fruits in the jungle,” Pias Carlin says. “If there was a bad crop, then the village got together and ate what they had.”

Vince Bagoyo, Jr., chair of the Maui Filipino Centennial Celebration, immigrated to Maui as a teenager to join his father, a 1946 sakada. Bagoyo described life in the Philippines as “very difficult, but still very happy.” “It was hard to say goodbye, to leave your family and [the] friends you grew up with, knowing you won’t be going back.”

“Maui has been good to Filipinos in the sense that all of those who are willing to work hard have succeeded,” Baxa says. “It’s a two-way street: we gained from Maui, and Maui gained from the Filipinos. . . . Who would’ve worked in sugar, in the pineapple fields, as errand boys at the hotel? We supplied the essential labor.”

The 2000 U.S. Census recorded 21,804 Filipinos in Maui County, or 17 percent of the population, although by now Baxa believes the number is closer to one-third. Filipinos work in a wide range of professions: medicine, banking, teaching, tourism, politics. . . . “If you were to tell the Filipinos to stay home today, the entire state of Hawai‘i would be bankrupt,” Bagoyo says. “That’s how powerful the contributions are we’re providing.”

According to Pias Carlin, Filipino culture is still in the process of taking root in Hawai‘i. “We haven’t had time to bloom; we’ve had to maintain everyone else’s plants,” she says. “We have a lot to prove. We have an innate goal to succeed as Filipinos.”

Going forward, one of the most important contributions will be political, Baxa believes. “We have to participate in government,” he says. “Unless we are there, we cannot fully say we are members of the community. I would like to see more Filipinos running for political office.”

Although Bagoyo’s parents didn’t have financial resources, they impressed on him the importance of education, and they taught him to take risks. That’s why he encourages his own daughters to leave Maui and travel. “If my dad had asked me to stay home, I wouldn’t be where I am today.”

Bagoyo also teaches his daughters pride in their heritage. “I’ve noticed with some older Filipinos, when you ask their nationality, they put Filipino last. I tell my kids: put it first. It’s a very rich culture; don’t be ashamed. Talk to your grandparents, and learn from them. Learn how hard they worked in the plantation.”

Lawrence Pascua, founder of Bituing Silangan Folkdance Company of Maui, looks back to the roots of the shame that some younger Filipinos feel about their culture.

“Cultural idiosyncrasies that were normal for the original immigrants were looked upon as very different and weird to those already living in America,” Pascua says. “It really affected the first and second generations of Filipinos—the children of the immigrant workers.”

The Filipinos who came to work in Hawai‘i’s sugarcane and pineapple plantations were primarily Ilokanos from the central to northern region of Luzon. A dark-skinned people, they did not intermarry with the Chinese, who came to the Philippines primarily for commerce, or the Spanish, who colonized and ruled the Philippines for approximately 400 years. City-dwelling Tagalogs and Visayans, many of whom married foreigners, thought of Ilokanos as simple and unsophisticated country folk; and considered the Ilokano language harsh and guttural compared to the singsong of Tagalog or the straight forward quality of Visayan.

Habits that came naturally to Ilokanos at home in the Philippines seemed strange by American standards. If they dressed up to compensate for being “country folk,” they were seen as too flashy. If they rested by hunkering down on their heels, they were thought of as primitive. Their enjoyment of cockfights, their love of such traditional delicacies as balut (fertilized duck or chicken egg), and dinardaraan (pork cooked in blood) were viewed as barbaric.

Pascua says it took him a while to become proud of his own heritage. “Not until I reached college, when I began to learn the folk dances, did I realize I had anything to be proud of.” Now he shares his love of traditional Filipino folk dance with his young students, teaching the dance steps and their significance to the rhythm of Filipino folk music. “One of my goals is to get [my students] on stage . . . to help them realize it’s important to spread the culture and not let it die.”

Fortunately, the younger generation is beginning to wake up to the gold of its heritage. As awareness of Filipino culture is raised through events, festivals, pageants, and the arts, traditional foods, costumes, dances, and languages are being revived and cherished.

“We have to remember to preserve our culture, remember our roots,” says Chastity Baysa, crowned Miss Maui Filipina 2006 in the annual scholarship pageant sponsored by the Maui Filipino Community Council.

For respected artist Macario Pascual, painting has served as a means of cultural expression. The son of a 1946 sakada, Pascual came to Maui from Ilocos Norte with his mother at the age of five. Plantation life was not glamorous, but as he grew older, Pascual was able to see it as “living in a Norman Rockwell painting”—vibrant in its simplicity and significance. “I started doing drawings of plantation workers, using my family as subjects, and it was really an awakening for me,” he says.

Pascual’s sensitive portrayals of cane and pineapple workers brought him recognition and commissions from Alexander and Baldwin, Inc., and other corporate and private collectors. “Anytime I needed someone to serve as a model, [or] show me the techniques used in the fields, [my father] was there for me,” Pascual says. “The only thing he cautioned me about was how an artist’s pay was not steady. That went against why he came to America: to find stability and a paycheck for his family.

“America was the place where you could make things happen and improve yourself. All the sacrifice, doing all the jobs that nobody wanted—he was a pioneer.”

The yearlong centennial celebrates the triumphs Maui’s Filipino community has achieved, the challenges it has overcome, in the past 100 years. It’s important, says Antonio Baxa, because “sometimes when we succeed in life, we forget where we came from,”

Not likely this year, especially once the Maui Filipino Centennial Celebration Coordinating Council releases Anak (“child”), a commemorative book that chronicles the history and contributions of Filipinos on Maui during the past 100 years. Much more than balut and cockfights, Filipino culture is all about family, loyalty, determination, education, and freedom—all the things that America represented to the sakadas, and the reason they left their homeland to come here.

“[The book is] not just about looking back, but looking forward,” Bagoyo says. “What are we going to do next? Where do we go from here? I challenge Filipinos to set priorities and goals; not to be satisfied with what we have today, but to ask, ‘How can we contribute to the larger community?’”