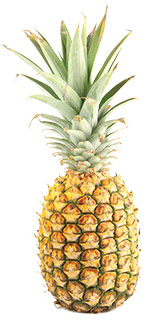 Pineapple was plentiful when I passed through Kahului Airport in mid-December. A Hawaiian-style Santa beckoned from colorful boxes stacked outside shops, inviting passersby to pick up some Maui Gold for the trip home. So it was a bit of a shock when, returning to Maui just after Christmas, I hit the farmers’ market and found no pineapple on display. Only days earlier, Maui Land & Pineapple Company had ceased its harvest. Though in fact pineapple was still available in some stores, its absence from the farmers’ market was a sad reminder that a crop was disappearing. Suddenly the future of agriculture on Maui looked a lot less sweet.

It’s hard to imagine Maui without pineapple: the orderly silver-green rows of spiky tops stretched across acres, the dusty laborers in sunny fields, the luscious golden fruit. How many kids paid for college by working summers in the cannery? How many generations earned a decent living growing pine, and climbed from immigrant beginnings to middle class?

From Elvis Presley’s “Pineapple Princess” to the poolside cocktail in a scooped-out pineapple, the fruit is an international symbol of Hawai‘i. Here in the Islands, even Hawai‘i’s liquid sunshine—sprinkles of rain on a sunny day—is known as “pineapple juice,” and the baby born unexpectedly to middle-aged parents is a “ratoon crop,” the bonus fruit that grows after a plant’s initial harvest.

The announcement last November that ML&P would shut down its pineapple operations was the final blow in a series of misfortunes that have overtaken the company in the past two decades. It’s not easy in the first place to grow a commercial crop in isolated Hawai‘i, where land, water and other agricultural necessities are expensive, and high wages and good benefits make agricultural workers some of the best paid in the world.

But Hawai‘i’s pineapple industry really began to founder in the early 1990s, when foreign producers “dumped” fruit on American markets at less than their own cost of production. Maui Pine faced that challenge as it struggled to carry on after the sudden death of CEO Colin Cameron in 1992. By 1999, the company begun by Baldwins and carried on by their descendants, the Camerons, looked to AOL founder Steve Case, a Honolulu native whose family had done business with theirs for generations, to rescue it from a financial crunch.

Managers installed by Case took the company on new paths they hoped would lead to bigger profits. But last November, with all the Camerons off the board of directors, with the cannery closed, hundreds laid off, and the company gasping for air, the new management announced that it would cease planting pineapple. It looked like the end of a century-long tradition, until some longtime employees pulled together resources and expertise to lease land and purchase equipment from ML&P to start a new company.

It is too early to say how well their Hali‘imaile Pineapple Company will succeed. In any case, this turning point for the old Maui Land & Pineapple Company symbolizes the end not only of a business, but of a way of life.

Pineapple has been a commercial crop on Maui for more than a century. David Dwight Baldwin planted it in Upcountry Ha‘iku as early as 1890. The crop proved a success, and in 1912 the Baldwins began planting at their Honolua Ranch on West Maui.

By 1924, Upcountry pineapple operations were fruitful enough that the family established Hali‘imaile, below Makawao, as a center of pine production, and built a village of about 120 cottages there, all with electric lights and running water at a time when many of the older sugar-plantation camps were still relatively primitive. The new village had its own sewage disposal system, and there was a store, stable, garage, blacksmith shop, repair shop, dispensary, warehouse and office.

In 1925, Harry Baldwin’s daughter, Frances, married J. Walter Cameron, and Baldwin turned over management of the pineapple division to his new son-in-law. It was, J. Walter’s daughter Mary Cameron Sanford remembered recently, “a little experimental company” at the time. A Bostonian whose background was in newspaper advertising, Cameron knew nothing about pineapple, but hired others who did and built the company into one of the island’s largest employers.

Plantations were the economic engine of the early twentieth century, with sugar and pineapple not only the main employers, but also major sources of infrastructure for the community. Workers lived near each other, shared lunches in the fields, and socialized at company parties. “Everybody was invited, including the lunas [managers] and top brass, and everybody went,” recalls Sanford, who grew up attending such parties and receiving medical care at the company dispensary.

The workers themselves organized cultural clubs and sports teams, using the gym, playing fields and other facilities supplied by the company. Executives mingled with and listened to mid-level shop workers; ambitious employees took night courses to improve their skills and came up with ideas that made the plantation more efficient.

Eddie Ceballos looks back fondly at fifty years of working for Maui Land & Pineapple. “I grew up in Hali‘imaile,” he says, with a father who retired from the company after thirty-two years. Eddie started as a water boy; by the time he retired, he was in charge of the construction shop. Ceballos’s daughter worked at Hali‘imaile during the summers.

“The company took care of the employees,” Ceballos says, supplying homes, free water, free kerosene and diesel for water heaters and free medical care. In J. Walter Cameron’s day, “They knew the worker by name, not by number. Mr. Cameron always would think about the community. He always would take care of the people below him. Management had a good team. They were community people. Everybody knew everybody. That’s what made the company strong.”

Pineapple work was hard, whether in the fields or the cannery, and it bred a work ethic in youngsters who, in many cases, headed for higher education just to ensure that they did not have to spend their adult years where they had spent their teenage summers. They took with them values gained in plantation life, such as an awareness of other cultures that resulted in ethnic tolerance. Many looked back with nostalgia on the shared experience of community life in plantation camps like Hali‘imaile and Honolua as they moved to a more urban lifestyle.

Meanwhile, Maui Pine itself was changing. In 1962, the Honolua plantation (known as Baldwin Packers) had merged with Hali‘imaile’s plantation as Maui Pineapple Company. In 1965, Hali‘imaile village was subdivided, its lots sold to employees, and the dispensary closed. That same year, 565 acres of West Maui land were reclassified from agriculture to urban, as J. Walter’s son, Colin Cameron, began the process of converting Honolua’s former pineapple camp to a high-end resort that would be called Kapalua. Its symbol: a pineapple with butterfly’s wings. The resort would make the company, renamed Maui Land & Pineapple, a leader in Maui’s new visitor industry.

“Hawai‘i without pineapple would be like New Zealand without sheep.”

Yet pineapple remained the core of the business for years to come, despite falling revenues. Retired chief agronomist Doug MacCluer, a member of the group that started the new Hali‘imaile Pineapple Company, says he remembers the peak years, when some 2,000 workers in field and cannery handled a harvest of 250,000 tons a year, grown on more than 7,000 acres. Pineapple’s image lent a tropical romance to restaurant names, community festivals and aloha-shirt designs; its sweetness flavored jams and syrups, its fruit was featured on menus from Kona to Hanalei. Local businesses shipped thousands of pineapples each week to individual mainland customers, and the Kahului Cannery filled millions of cans with fruit and juice.

One surprising pine product started as practice, when Tedeschi Vineyards at ‘Ulupalakua Ranch used the fruit in its wine making while its first grapevines matured. The resulting pineapple wine became the winery’s biggest seller, a mainstay that keeps the company in the black. The fact that this fruit is grown on Maui is important, and not just because it would cost more to import pineapple, says Tedeschi president Paula Hegele. “Our industry is about where this fruit was grown,” whether it’s grapes or pineapple that make up the base of a wine.

Like other small farm, Tedeschi is helped, Hegele says, by the very existence of big ag producers, who have the personnel to sit on boards of professional associations and the funds to help support group advertising. Big farmers bring in container loads of farm supplies that keep costs low for the little guys as well.

The potential loss of a vital raw material was one reason ‘Ulupalakua Ranch owner C. Pardee Erdman decided to invest in the effort by several longtime Maui Pine managers to rescue pineapple operations Upcountry. “We started to be concerned about where we’d get our pineapple juice” for the winery, he says.

But it’s more than that. ML&P “was one of the great ag companies of the world,” developing the sweet, low-acid Maui Gold, and the partners in the new company are  “some of the best brains” in pineapple cultivation, Erdman says. “We’ve got a great product. And Hawai‘i without pineapple would be like New Zealand without sheep.”

So as the new year began, and the new Hali‘imaile Pineapple Company picked up where Maui Pine left off, it looked as if pineapple would be around, after all. That was good news to a lot of people, including those, like me, who just want to keep eating the fruit that’s been called the best pineapple in the world.

Maui Land & Pineapple Company was a family affair from the beginning. Dwight David Baldwin, son of Lahaina missionaries Dr. Dwight and Charlotte Baldwin, first grew the fruit at the family home in Lahaina, then experimented with different varieties when he moved to Ha‘iku. In 1903, his brother Henry Perrine Baldwin founded Ha‘iku Fruit & Packing Company, whose initial pack was 1,400 cases of canned pineapple.

Henry’s son Harry saw the potential for pineapple production on land not suitable for other crops, and set up pineapple divisions in agricultural companies owned by the family on the slopes of Haleakala. Over time, the East Maui pineapple divisions merged operations to become Maui Pineapple Company.