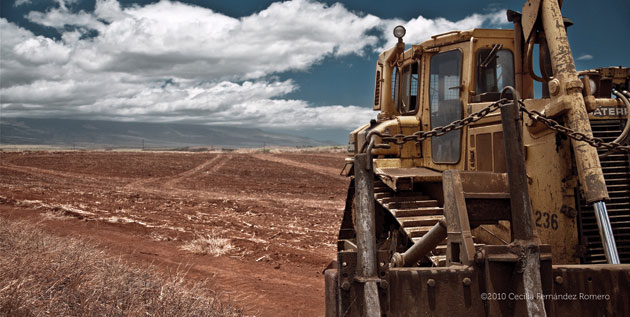 When Maui’s Central Valley is green with sugarcane as far as the eye can see, Hawaiian Commercial & Sugar’s agricultural lands seem as imperishable as Mt. Haleakala. A large chunk of the island’s population is descended from cane workers, and “Dream City,” built in the 1950s to house HC&S employees, gave birth to the town of Kahului. It’s hard to even imagine Maui without the imprint of the plantation era and large-scale agriculture.

But over the past decade, Maui has lost Pioneer Mill sugar company, Haleakala Dairy, and Maui Land & Pineapple. To avoid the same fate, HC&S, Maui’s last big agriculture company, is working towards a possible transition from sugar cane to the new energy elixir, biofuels—just as Hawaiian Electric Company and its subsidiary Maui Electric are investigating a switchover to biofuel for their power plants. The prize could be energy self-sufficiency and new life for Maui agriculture. But some scientists and activists claim that biofuels could actually aggravate environmental problems, and fail to provide the energy benefits they promise.

The question of whether local biofuel production could wean Hawai‘i off its dependence on imported oil is an urgent one. According to a 2007 report by the University of Hawai‘i’s School of Ocean & Earth Sciences & Technology, imported oil provides almost 90 percent of the state’s total energy. About a third of it is used to generate electricity; 78 percent of the electricity generated in the Islands comes from oil, compared to a national average of 3 percent. One result: Hawai‘i’s electricity is the most expensive in the United States. And price isn’t the only problem. Any long-term disruption in the transport of petroleum would leave Hawai‘i not only immobilized, but quite literally in the dark.

Can we power the island and boost local agriculture with Hawaiian bio-fuel? “I’m not ready to declare sugar dead,” HC&S Executive Director Chris Benjamin says, “but if we do need to make the transition out of sugar, biofuels hold the greatest promise.” Growing large-scale crops on HC&S’s 35,000 acres and “using new technologies to produce an advanced liquid biodiesel product” could make HC&S a supplier of everything from military transportation fuel for diesel trucks and jets, to replacement fuels for Hawai‘i power plants.

This October, the U.S. Department of Energy is expected to give final approval to some $4 million in Federal grants—funding to explore biofuel production on Maui. The partners in this five-year research project are HC&S, the Navy, the U.S. Departments of Energy and Agriculture, and the University of Hawai‘i‘s College of Tropical Agriculture & Human Resources (CTAHR). Lee Jakeway, HC&S’s director of energy development and planning, says the study will focus on crops such as “energy cane” (a hybrid cane whose stalk has more fiber than sugar), and “high-yield tropical grasses.” The company is also partnering with Texas A&M University to investigate the possibilities of sweet sorghum, whose grain heads can be used as food, while the stalks are processed into biofuel. Meanwhile, HC&S is working with several companies on second-generation processes that will be more “energy positive” than turning sugar into ethanol, and will “keep the Central Valley in agriculture for years to come.”

For those who suffered through the summer’s cane burnings, biofuel crops suggest another potential benefit. With energy cane, says Jakeway, the focus would shift from fermentation to fiber production. “We’d try to recover as much [of the plant] as possible, so we’d have an incentive not to burn.”

If crop and conversion technology experiments are successful, HC&S may be able, with the aid of Federal capital-improvement funds, to rebuild the Pu‘unene sugar mill into a full-fledged biorefinery. Proponents say the Central Valley could become a renewable energy plantation.