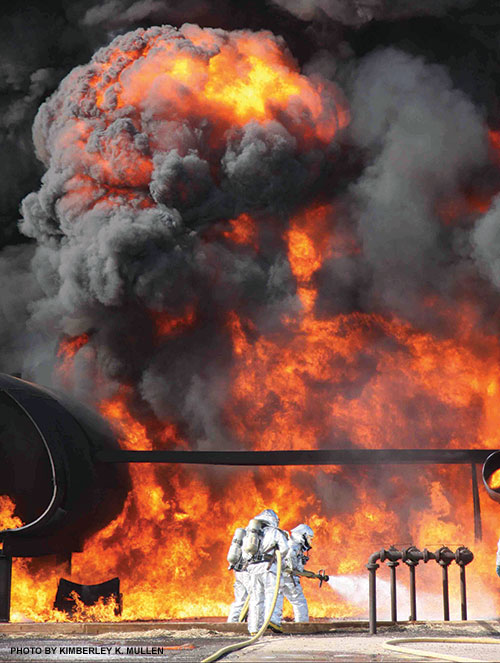 Firefighter Mark Pokini is being chased by a monster — a wet, salty, spine-chilling beast. The fifteen-foot wave rolls towards shore, forming an avalanche of whitewater at his heels. Its booming force eclipses the hum of Pokini’s Jet Ski, and as the wave face heaves forward, it appears he’s about to be swallowed by the ocean. Pokini peeks over his shoulder for a millisecond before locking his gaze ahead, yanking on the throttle and racing to safety.

And this is just the drill.

A twenty-six-year veteran of Maui County Fire Department, Pokini is a captain at the Kahului station, and also leads the department’s Jet Ski training program. For the next several hours, his “classroom” is the notoriously treacherous Kahului surf break called Pier 1. Pokini keeps watch over his students as they carve figure eights across the ocean while awaiting his orders.

“Things get progressively harder for them, and by the end we make them catastrophically fail,” says Pokini, referring to an exercise that forces the driver to jump off the Jet Ski with the key in hand. The person being pulled on the tow sled must gain control of the ski and rescue his or her partner — all while dodging oncoming surf.

“It’s one of the main reasons people who are tow surfing get in trouble. The driver is tossed off the ski and the guy on the sled isn’t able to get out of harm’s way,” he explains.

“Firefighter” is the official job title, but the men — and one woman — of the Maui County Fire Department do a heck of a lot more: dangling from helicopters for ocean rescues, using the “jaws of life” to pull passengers out of crashed vehicles, and rappelling cliffs for recovery missions.

Maui County is made up of three populated islands (Maui, Moloka‘i and Lāna‘i), and a fourth island (Kaho‘olawe) that occasionally has volunteers on it, and always has unexploded ordnance from years of U.S. Navy bombing practice. All the islands have enticing but sometimes treacherous trails, while offshore, rough currents and powerful waves can make the ocean dangerous for swimmers and boaters. It’s a logistical puzzle found nowhere else in the country.