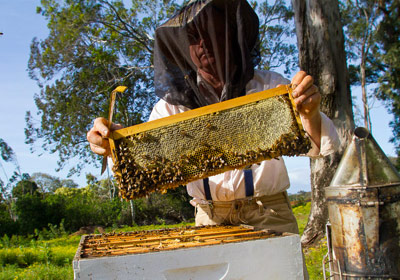 In the dark of their hives, they dance. With their legs packed with pollen and nectar on their tongues, honeybees waggle wings and tails, telling their sisters where to find the best blossoms. Their vibrations communicate a flower’s distance from the hive and location in relation to the sun, calculated to include wind conditions. Honeybees are nature’s alchemists. They turn flower juice into liquid gold — honey — and a host of other products humans covet. And that’s not all.

These winged workers pollinate one-third of our food. Without honeybees, many of the fruits, nuts, and vegetables we rely on would vanish. In Hawai‘i, think mangos, avocados, coffee, and macadamia nuts. Yet nationwide, industrial farming methods have driven both feral and managed bee colonies to the brink of collapse. A triple punch of pests, pesticides, and diseases has hammered the delicate tuning of the bees’ social order. Luckily, backyard beekeepers, particularly those in Hawai‘i, can help the bees — while reaping sweet rewards.

Kula farmer and beekeeper Mark Damon resembles a modern-day St. Francis of Assisi as he brushes bees from their comb with bare fingers and an unconscious grace. Dressed in long sleeves rolled to the elbow and work pants held up by thin suspenders, he’s conducting what he calls “open-heart surgery” — transferring a feral colony from wooden dresser drawers to a manmade hive, or bee box.

“Bees are actually wild animals,” says Mark. “Wild animals don’t look to you for sustenance. They make decisions based on natural laws. You have to get into this strange, wild consciousness to work with them.”

Mark’s been cultivating that consciousness since he was nineteen. His wife, Leah, is similarly bee-brained; she grew up with bee boxes outside of her bedroom window. Together, they operate Maui Bees, tending 100-plus hives and selling honey at their idyllic you-pick organic farm in Upcountry Maui. Each summer, the Damons teach beekeeping classes, initiating novices into the ancient art of apiculture. 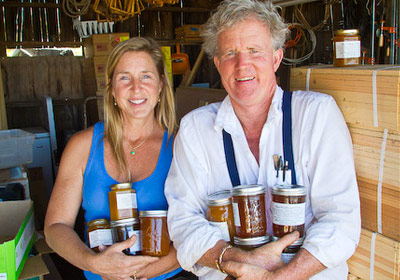 The Damons’ class starts around the observation hive, a glass-enclosed honeycomb teeming with bees. One peek reveals the writhing truth of the phrase “hive of activity.” Hives house around 60,000 individuals, each with an assigned task. The queen’s job is to lay eggs. Male bees, or drones, exist solely to mate with new queens. Female workers take care of everything else. They build the hive’s immaculate hexagonal cells with wax they secrete. They patch the hive’s outer walls with propolis, an antimicrobial sealant they make from tree resins. The eldest bees leave the hive in search of nectar and pollen; these are the dancers. There are also nurses, housekeepers, guards, queen attendants, undertakers, and fanners, whose fluttering wings keep the hive’s temperature consistent.

Bees communicate using vibration and pheromones — chemical cues that tell them their queen is safe, more workers are needed to process pollen, or it’s time to find a new hive. This industrious community stores extra honey to feed its brood over the winter. That’s the gold beekeepers harvest. 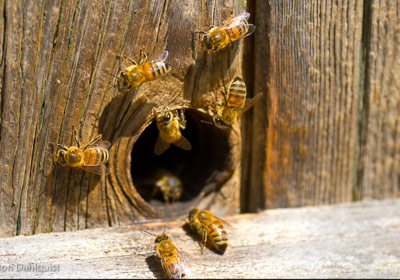 Apprentice apiarists learn not to loom over hives, nor to wear black, which reminds bees of their age-old enemy, the bear. Beginners struggle to locate speck-sized bee eggs, proof of a healthy, reproductive queen. Next they learn to identify signs of trouble in the hive: infiltration by the small hive beetle, or chalkbrood, a fungal infection that gums up the cells of developing baby bees.

The worst plague, the Varroa destructor mite, has yet to appear on Maui, though it’s present on O‘ahu, Kaua‘i, and Hawai‘i Island. Tiny varroa mites fasten onto adult and baby bees and feed off their victim’s blood. They spread secondary diseases into hives, often resulting in the death of infected colonies. Commercial beekeepers can lose 30 to 90 percent of their bees to this pest.

Before students become overwhelmed, the Damons get them busy handling bees. “When we see their eyes start to glaze over,” says Leah, “we suit up and get the smokers going.”

For Leah, suiting up means tucking her pant legs into her socks — a habit she adopted after a bee crawled up her thigh one day. The Damons don’t wear gloves or veils. “Your bare fingers can better sense how to lift frames from a bee box without squishing any bees,” explains Leah. “And veils are too hard to see through.” But students can wear them if they prefer.

Smoke, however, is essential. It’s been used to pacify the winged stingers since ancient times. Smoking a hive inhibits the bees’ use of attack pheromones. Still, stings happen. “If the bees get so upset with you that they’re stinging,” Leah says, “just give up for the day and go to the beach.”

“Most people have a deep bond with the bees before they come here,” says Mark. “They’re drawn to the energy and they want to be steeped in it. But few go on to keep bees. They find out it’s more work than they thought.”

Those who pursue the hobby get the payoff.

Honey lovers treasure the wild harvest for its antibacterial, antioxidant, and humectant properties. They eat honey raw, incorporate it in cosmetics and spa treatments, and even use it to dress wounds. Because of Hawai‘i’s tropical climate, honey can be harvested twice a year, with an average of 100 pounds per hive. Bee boxes placed near macadamia, Christmas berry, ‘ohi‘a lehua, and kiawe trees produce unique and sought-after honeys.

“Hawai‘i is a very bee-friendly place,” says Danielle Downey. She’s the state apiary expert, recently hired to help the industry flourish despite the new pests. “The weather and plant diversity here allow year-round foraging for bees, queen production all year, and large honey crops from a variety of plants.

Hawaiian honey has been marketed well and commands the nation’s highest prices — up to $40 per pound. Even so, it’s not a huge moneymaker. Most beekeepers, like the Damons, produce honey for themselves and a cadre of devoted customers. Beekeeping’s real cash comes from producing queens and renting hives out for pollination of crops.

Hawai‘i is the queen bee production capital of the world. Three major producers on the Big Island rear hundreds of thousands of queens a year — supplying between 25 and 50 percent of the queens purchased by U.S. Mainland and Canadian beekeepers. Pollination services in Hawai‘i are valued at $200 million per year.

“Each colony of bees will forage a radius of several miles, which can make a big difference for agriculture of all sizes, including backyard gardens,” says Downey.

Small operations like Maui Bees are important. As feral colonies fall to disease, and inbreeding weakens commercial hives, hobbyists and boutique producers maintain healthy populations of pollinators. The Damons try to keep their hives as close to natural production as possible.

“We visit them every two to three weeks to make sure their queen is okay, and they have enough room,” says Mark Damon. “It’s a meditation. The vibration of bees is so high; it’s like being in the presence of an ascendant master. And it rubs off on you.”

Downey agrees. “Keeping bees will change the way you see the world. You can’t help it: you see plants and flowers differently; you notice weather patterns on behalf of your bees. It’s a new way to see the world.”