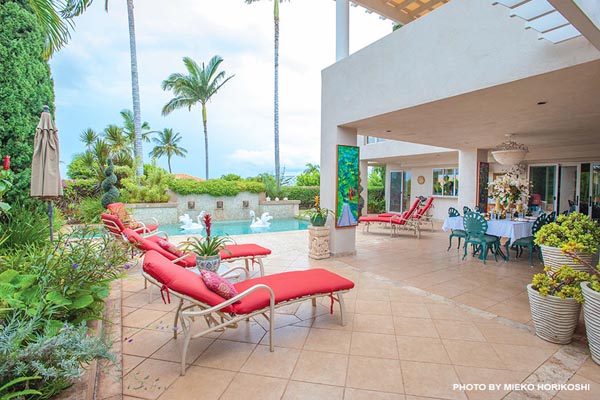 The house sits on a Wailea hillside above Maui’s sunny southern coast, its architecture firmly rooted in Mediterranean design. The night the owner gave them a tour, Ed and Diane Lane made an offer on the home.

Mind you, it wasn’t on the market.

At the time, the Lanes were living in the Polo Beach Club condominium they’d purchased as a vacation property in 1986, and moved into full time in 1994, so that Ed could indulge his lifelong dream of becoming a fine artist. A second Polo Beach condo became his studio.

By 2004, the Lanes wanted a home that would function as a place both to live and work in, a house that was open and filled with light, with ample wall space for hanging art.

“I wanted lots of pocket doors for indoor-outdoor living,” Diane recalls. “That was not easy to find in our price range.” 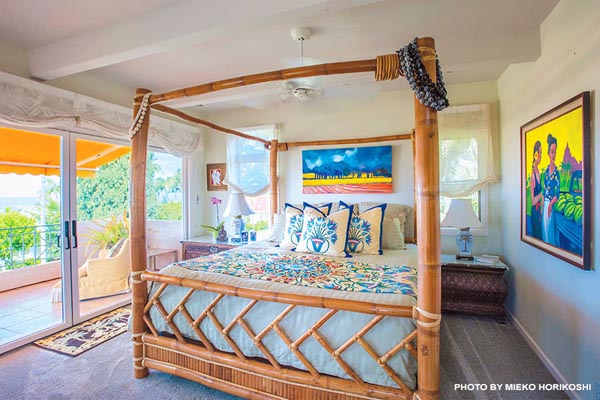 After a long and fruitless search, the hard-to-find house practically fell into their laps. “My hairdresser knew the owners,” says Diane. “They had taken the house off the market. She arranged for us to see it that evening. It was love at first sight. The house had almost everything on our checklist, and the charm of Mediterranean style. We had owned an architecturally historic Mediterranean home in Phoenix.”

The Lanes made an offer that night, and the next morning, the owners accepted. Three months later, Diane and Ed had sold their condominiums and moved in.

“I say thank you every day to the architect, Owen Tan,” says Diane. “He built the house for himself, but it feels like he designed it for us. Its clean lines also make it a perfect backdrop for Ed’s art. It has amazing wall space for such an airy home. From the moment we walked through the entrance arbor, we were hooked.”

It wasn’t the first time the Lanes had made a major life decision in mere minutes. In 1960, Ed was working for a Phoenix advertising agency when a new hire arrived. “When I saw Diane walk in the door,” he says, “I thought, ‘Look what God has sent me.’” Six weeks later, they were engaged.

In 1962, the Lanes decided to open their own agency. “I had a 1958 MGA,” says Ed. “It was all I owned. I sold it for $2,500, and bought two typewriters and a mimeograph machine. We started the agency with that. I had enough left over to buy a $75 Fiat. That car looked so disreputable, when I’d go to see a client, I had to park two or three blocks away.”

During Ed’s tenure as head of E.B. Lane, the agency won numerous national awards; in 1995, the Phoenix Ad Club named him Ad Man of the Year.

But Ed still yearned to paint. They turned the agency over to their son, Beau, and move to Maui.

“I hit the island running,” says Ed. “I would pile everything in my Jeep and go out and paint.” He developed a style he dubbed “the art of exuberance”: vibrant, colorful canvases that he layers first with red, then people and scenes of Maui, Tahiti and other enchanting places the Lanes have traveled.

Ed’s studio occupies one of the home’s three bedrooms. Half the size of his former studio, it’s filled with canvases and cabinets, easels and supplies. Paintings in various stages of completion cover the walls clear up to the ceiling. “It’s a contortionist’s dream to set up a big painting here,” he quips. What the room lacks in space, it more than makes up for in ambiance. The north and east walls have sliding glass doors that open onto gardens and admit diffused sunlight. 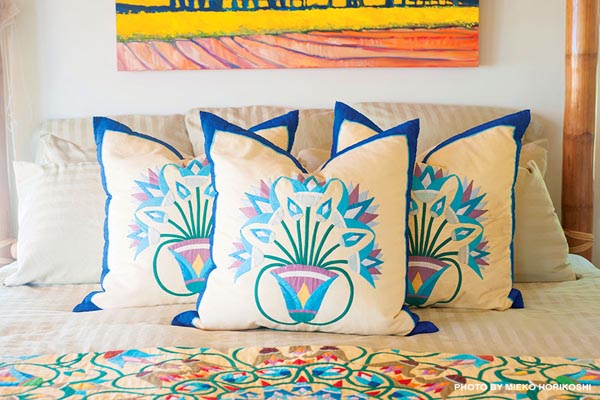 In 1994, Diane began delving into art, taking classes in silk painting that blended with her interests in fashion and fabric design. From 1995 through 2009, she created custom, hand-painted clothing under her Leilani Silks label, and had her work accepted into exhibitions. Now that she’s retired, the bedroom that once served as her studio is a guest room, and Diane indulges her passions for gardening, cooking and entertaining. Gardens wrap around the home; a life-sized statue of Kuan Yin, goddess of compassion, stands contemplative watch over herbs, aloe, Meyer lemon, yuzu, orchid peppers with hot, hot seeds, finger limes, chocolate mint that imparts a seductive smell when you rub the leaves. . . .

Though the property is a modest 9,600 square feet, those wraparound gardens add to the sense of privacy the architecture creates. “Each room has a patio that makes for lots of private little nooks,” says Diane.

Upstairs, those nooks give way to expansive views that extend from ‘Ulupalakua, on Haleakala’s southern slope, across the sweep of ocean and neighboring islands, all the way to the West Maui mountains. “The master suite has such a beautiful view of the ocean,” says Diane. “It’s hard to walk downstairs in the morning; I just want to watch the sky change colors. I often delay the start of my day with a cup of coffee on the upstairs lanai and watch the world awaken.”