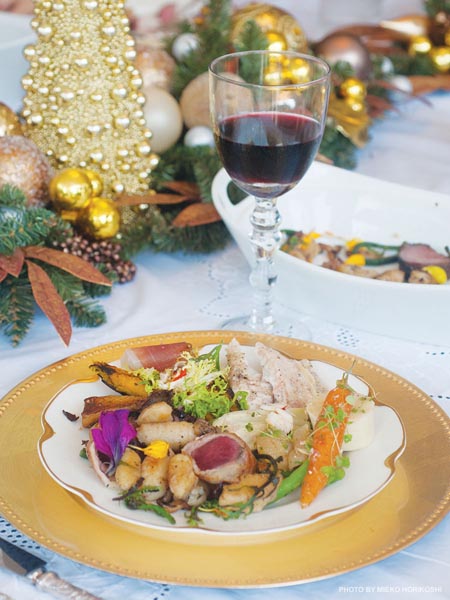 Ed and Diane Lane welcome us into their home with warm smiles, while Toulouse Lautrec, a dapper long-haired Chihuahua, and Coco Chanel, a dainty Maltese, yip and twirl at our ankles as if to say, “Okay, you can pick me up!” A few minutes later we’re joined by Brian Etheredge and Chris Kulis, chef/owners of the romantic Italian restaurant Capische?, and Cameron Lewark, executive chef at Spago Wailea, assisted by Spago sous chef Frances Singleton. In 2008, his peers named Etheredge Chef of the Year at Maui No Ka ‘Oi’s ‘Aipono Awards; in 2010, Lewark won that title. The respect and camaraderie these professionals share inspired us to ask them to help us create a holiday test kitchen — the first time we’ve had multiple cooks in the kitchen.

We help haul two carloads of ingredients and implements into Diane’s kitchen, then ascend to the upstairs lanai, where Chef Cameron’s rum punch awaits, brimming with fresh berries, Thai basil and spearmint. “This is how I like to start cooking sessions at home!” quips art director John Giordani.

Downstairs, Chef Brian surveys Diane’s compact but well-organized kitchen, admiring the strategically placed, Colonial America-style brass utensils. “I wish I saw your kitchen before I remodeled mine,” he says. “I cook a lot,” our hostess replies, “and I love those utensils. I bought those at Sturbridge Village in Massachusetts forty-five years ago and they’ve been in every one of our kitchens.” 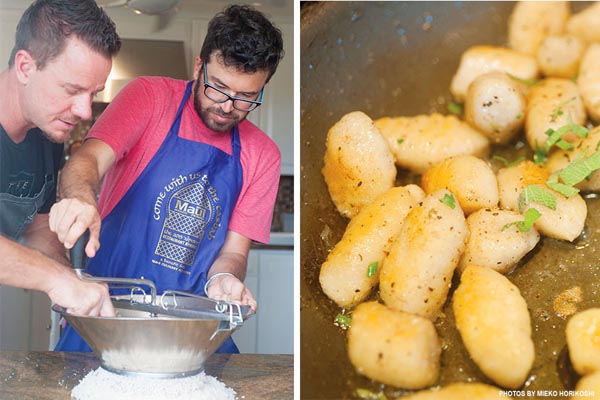 While Brian and Chris organize the mise en place, Cameron recruits MNKO sales executive Michael Haynes for a demonstration on making ginger syrup that will become ginger ale. First task: Shred the ginger root. Mike stops halfway through, glances at his knuckles coming ever closer to the sharp box grater, and asks, “Can you do this in a food processor?” Cameron replies, “Sure, but not everyone has one. I wanted to show you [the technique] using this basic tool.” He also shares a tip: “Don’t peel the root. The skin adds a lot of flavor.”

We learn that ginger syrup is easy to prepare — just three ingredients: water, ginger and sugar. Fermentation takes about five days, with daily feedings of more sugar and ginger, so Cameron has brought a bottle he prepared ahead of time. For nearly a week it has sat open at room temperature, collecting the natural, airborne yeasts that create effervescence and turn the strained syrup into ginger ale. We each take a sip, and though it’s nonalcoholic, it’s surprisingly tangy and refreshing. Let it sit longer, and the ginger ale will ferment into ginger beer. “Always use a plastic bottle to age the ale,” says Cameron. “I’ve lost plenty of glass bottles [from the build up of CO2].” 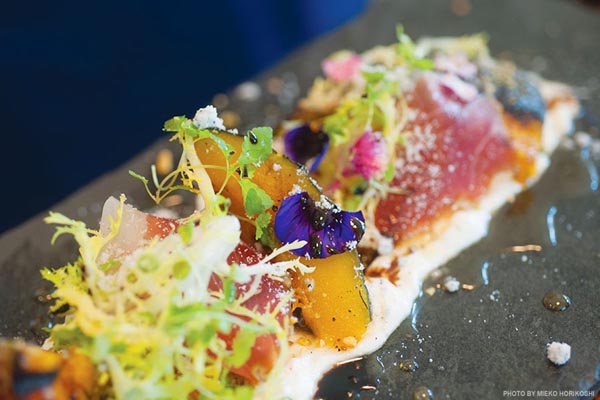 Next up: sashimi. With a razor-sharp knife, Cameron filets an ehu (short-tail snapper), a pelagic fish that resides at depths of 800 feet, its colors as bright and exuberant as an Ed Lane painting. He shows Diane how to slice the flesh into thin sashimi with long, fluid strokes. “When you filet the fish,” he notes, “make sure to get all the meat along the backbone and behind the gill. There’s lots of meat in the neck. If you use it for sashimi, it can be a little tough,” he adds, pressing it with a finger to demonstrate the springiness, “so you have to tenderize it with the heel of your blade to break up the sinew.” Glancing over Cameron’s shoulder, Chef Brian jokes, “Fish hold their tension in the neck, just like us.” 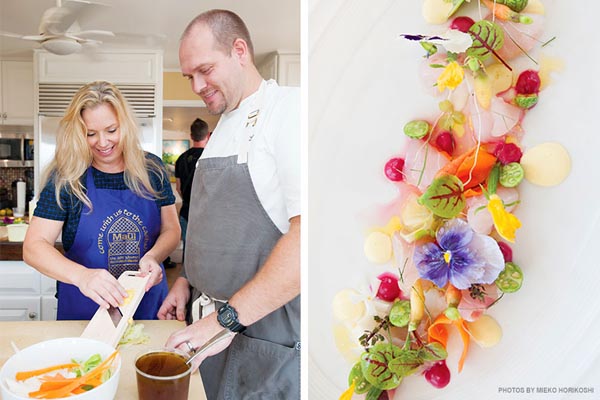 Meanwhile, Laura Lewark prepares the garnish that will accompany the sashimi. (Our director of sales, Laura is also Cameron’s wife.) Using a mandoline, she slices translucent ribbons of carrots, hearts of palm, and lemon cucumber, then tosses them in a lemongrass, ginger, and citrus vinaigrette that Cameron infused ahead of time. His tip for steamed infusions: “Always cover with plastic wrap . . . this allows for the steamed essences from the herbs to fall back into the bowl.” Oohs and aahs fill the room as he plates a palette with drops of canary-yellow yuzu and cotton-candy-pink beet vinaigrette. As the picture-perfect appetizer materializes, Ed exclaims, “It is almost too beautiful to eat!”

Nearby, Chef Brian holds up one of four herb-marinated venison loins and says, “We wanted a really special dish, so Cameron and I went bow hunting; this is the venison we harvested.” The loins are about a tenth the size of beef tenderloins, but perfect for the technique he shows us. “Since venison is such a lean protein, we wrap it in bacon and poach it in a water bath to retain moisture.” After ten minutes, Brian carefully removes the loins from the simmering water and lets them rest, then finishes them in a hot skillet, ladling the fat over the meat so it crisps and caramelizes. The room fills with heavenly aromas. 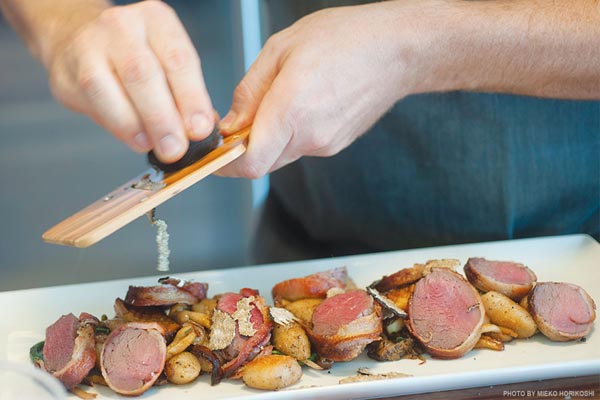 Brian brings out the baked taro and potatoes that are about to become gnocchi. He’s using Chinese taro, recognizable by its smooth skin and fewer surface roots. He says, “I like Chinese taro for its flavor and mealiness. It’s more potato-like than Hawaiian taro, which has a stickier cooked consistency.” He slices the hot, steaming tubers in half, lengthwise, then has Michael hold them in a thick towel and scoop the flesh into a mill that will extrude the starchy meal onto a countertop dusted with gluten-free flour. He says, “We used to incorporate 100 percent wheat flour into the gnocchi, but with gluten-free flour, there’s less of a chance to mess up the recipe. The rice flour [and an egg yolk he’ll add] holds it together nicely.” 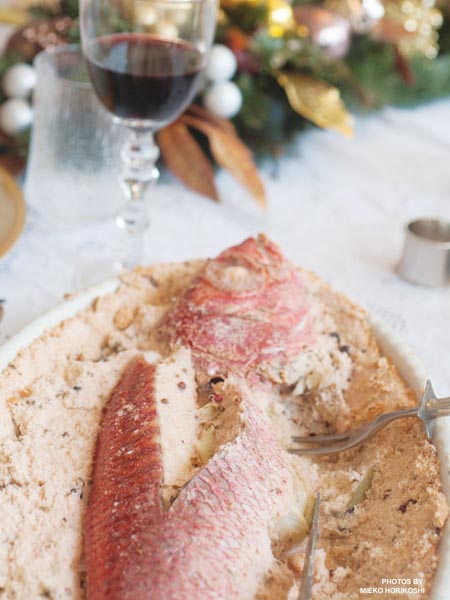 Chef Chris recruits Laura to help him with the salt-crusted onaga (long-tail red snapper). He filets the sustainably harvested pelagic fish with a few slices of the chef knife that woodworker John Whittle crafted of mango wood and Japanese steel. (As we marvel at the craftsmanship, Chris mentions that it’s sold at Capische’s sister business, The Market, in Wailea Gateway Center.) Next, Chris deftly pulls the pin bones from the filets with culinary tweezers. “That is the one piece of equipment I don’t have in my kitchen,” says our publisher, Diane Haynes Woodburn. “I need to get one.” “We sell them,” says Chris. I pipe in: “Perfect holiday gifts!” Chris reassembles the onaga in an ovenproof ceramic dish, stuffs it with fresh slices of fennel, and covers it with a mixture he’s made of whipped egg whites, salt, exotic spices . . . and five pounds of salt! “Bake immediately, and eat it soon after it’s cooked, so the crust doesn’t overly season the fish,” says Chris. 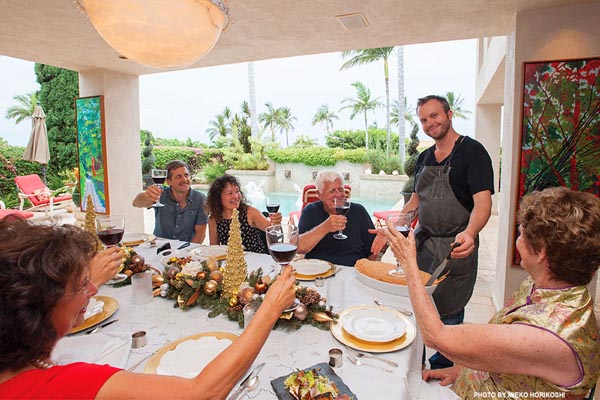 By midafternoon, we’re all hungry and eager to sample the feast we’ve helped our four chefs prepare. They usher us out to the courtyard and a dining table set with Diane Lane’s heirloom Limoges china and silverware (circa 1905). Chris presents the onaga at tableside and tells us that many of these dishes will appear on the Capische? and Spago menus during the holidays.

As we raise our glasses to the chefs, Diane Lane’s heartfelt comment echoes our thoughts: “It was such a privilege to have you all in our kitchen. I felt like I was taking part in a master’s culinary class. Each dish is not only delicious, but a work of art.” 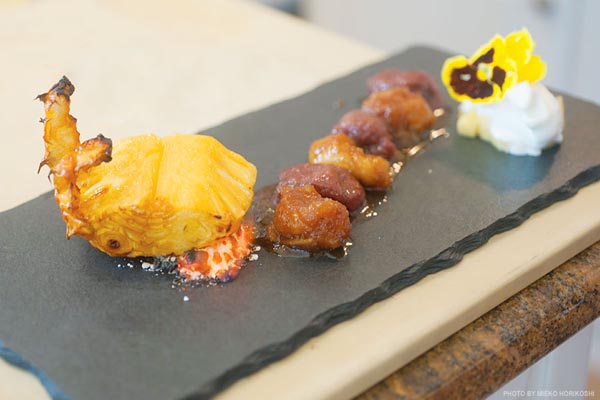