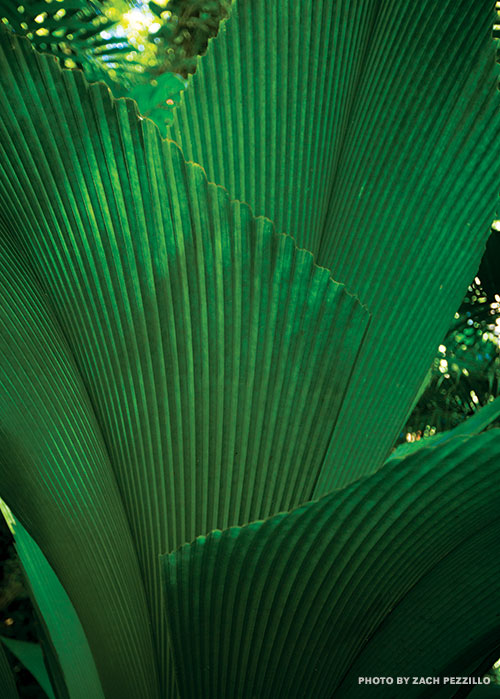 From the start, the garden was a self-contained system, as was the poet’s house, which he designed and built into the hillside. Three cisterns collect rainwater, and solar panels provide power. The poet devoted his mornings to meditating and writing, and his afternoons to planting and weeding. He eschewed fertilizers and big machinery, preferring hand tools and a watering can. The green waste he composted in heaping bio-piles.

Over the years, Merwin and his wife, Paula, planted thousands of trees, many of them endangered species. They successfully cultivated fourteen of the nineteen endemic Pritchardias, or Hawaiian fan palms. Their nearly-nineteen-acre botanical garden is now world-class, “one of the planet’s great palm collections,” according to Chipper Wichman of the National Tropical Botanical Garden. Wichman worked with world palm authority Dr. John Dramsfield and staff from London’s Royal Botanic Gardens, Kew, to catalog the rare specimens in Merwin’s forest. The collection now exists online as a searchable database.

Erickson gathers his group beneath one of the rarest trees: Hyophorbe indica from Madagascar. “Three amateurs saved this species from extinction,” he says. After the palm disappeared from its native environment, Merwin consulted with two fellow palm growers. They searched their greenhouses and found H. indica seedlings they’d stashed long before. Merwin’s tree eventually produced a cluster of bright orange seeds; he was able to share them and help reintroduce the species.

Thirteen years ago, when Erickson interviewed for a gardening job here, he had no clue who Merwin was. “He was waiting for me in boots, work belt, machete and a smirk,” remembers Erikson. “He sized me up and showed me a corner of the garden. My responsibilities grew from there.” Erickson adopted Merwin’s gardening techniques and much of his philosophy. “He’s such an internationally respected person, like a rock star hidden away in this little gem of a property,” says Erickson. “A lot of his neighbors don’t know who he is, and that’s how he likes it.” 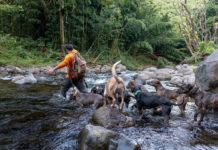