In the 1800s, if you looked out from ‘Iao Valley, you would see a vast green sweep of kalo growing in lo‘i (irrigated terraces) from Waihe‘e to Waikapu. Known as Na Wai ‘Eha, the Four Waters, this was once the largest kalo-growing region in Hawai‘i, with over 5,000 lo‘i kalo counted during the time of the Great Mahele, the division of Hawaiian lands that occurred in 1848.

Out of the approximately 1,800 lo‘i kalo counted in Waikapu at that time, there are only three today—and they are all on one family’s kuleana land (property granted to native tenants) in Waikapu.

As a child, Hokuao Pellegrino used to stumble over rock walls and the remains of ancient housesites when he played outside in the tangled fields. One day about 10 years ago, while exploring in Waikapu Valley, he found an old ‘auwai (irrigation canal) once used to supply water to the many ancient lo‘i. There among the weeds, he found two varieties of kalo still growing. “I picked one with a pure black stalk (mana ‘ele‘ele) and one that was the brightest reddish-pink (kumu ‘ula‘ula), and I took them home and planted them,” he says.

In doing so, he planted the seed of a lifelong ambition. The now 28-year-old Hokuao, his father, Victor, and mother, Wallette, are the caretakers of one of Na Wai ‘Eha’s few restored kalo farms: Noho‘ana (meaning “way of life”). The two varieties Hokuao brought down from the valley have flourished as the most prolific of the 45 varieties now on the farm.

Farming kalo was once a way of life for 25 percent of the population of ancient Hawai‘i; today, kalo is farmed by less than 1 percent of the state’s population. It’s endless, backbreaking work, as Hokuao can attest, but he finds it ultimately fulfilling.

“When I get into the lo’i, I feel a deeper connection with my ancestors who worked very hard to feed their families every day,” he says. “It’s a very humbling experience.”

The Pellegrinos regularly bring in school groups and others who help to restore, plant and harvest the kalo. “We really wouldn’t have come as far as we are without the support of Waikapu community,” Hokuao explains. “There’s a Hawaiian saying: ‘Those who have no help have small lo‘i.’ One person can’t do it unless people help each other.” 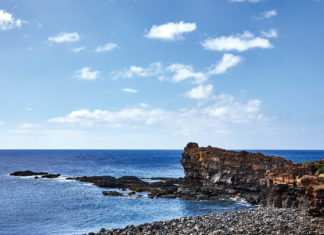 Kepā Maly is restoring authenticity to the stories of the island he loves.