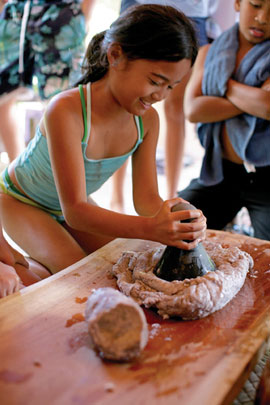 “Ready for ku‘i [ready to pound]?” Adelaide Kaiwi Kuamu Sylva asks expectantly. A slender Hawaiian woman in a blue dress, she wears her 92 years gracefully, a silk flower pinned in her silvery hair, her clear brown eyes taking in the family assembled around the picnic table in her Lahaina carport.

“Yes, Mama,” says her daughter June. She helps Adelaide to stand at one end of the table, facing a wooden board on which are piled chunks of soft, boiled kalo (taro). With both hands, Adelaide grasps the pohaku ku‘i ‘ai, the heavy stone pounder, lifts it high, and brings it down onto the sturdy papa ku‘i ‘ai, the poi board that was once her grandfather’s. “Ku‘i i ka poi, this is the way we pound the poi!” she sings gaily, as kalo flecks fly.

Rhythmically, Adelaide scoops water out of a bowl and slaps it onto the base of the poi pounder, briskly scraping the mashed kalo from the board’s raised sides with one sure hand. As she continues to pound, the purple paste gets smoother and shinier.

“It smells good, the poi,” says her elder daughter, Mary Bud. Everyone leans in for a fresh, earthy whiff.

June and Mary Bud grew up watching their father, Frank Ho‘oululahui Sylva, pound kalo at their home in Olowalu. Frank is one of the last people alive who can helu (recite) the old place names of West Maui. Adelaide is the last manaleo, Native Hawaiian speaker, of Olowalu. She is known for her skill at making poi palaoa (pounded kalo combined with flour to stretch the yield) and poi ‘ulu (poi and pounded breadfruit).

“We Hawaiians, we live on the poi,” Adelaide says. “We like our poi. It’s healthy; make your bones strong. That’s why Hawaiian boys get big muscles!”

Kalo is low in fat, high in vitamin A, and abounds in complex carbohydrates, making it easy to digest for even the most delicate stomachs. Brought to Hawai‘i by migrating Polynesians, it was a fundamental food of the ancient Hawaiian diet.

Hawaiians revered the plant for its mana, or life force. The cultivation of kalo was associated with the god Kane, giver of life, provider of water and sun. Only men were allowed to plant, harvest and pound kalo.

According to the Kumulipo, the Hawaiian creation chant, kalo is the elder brother of the Hawaiian race. Haloanakalaukapalili was the first-born son of the union between the god Wakea (Sky Father) and Ho‘ohokukalani, Wakea’s youngest daughter with Papa (Earth Mother). The baby was stillborn, and from his grave grew the first kalo plant. Wakea and Ho‘ohokukalani had a second, healthy child who was named Haloa (meaning “long breath”). Named after his elder brother, Haloa was the first Hawaiian.

In the Hawaiian ‘ohana (family), older siblings take care of younger. Thus, kalo, the elder brother, nourishes the Hawaiian people, just as they nurture the plant.