We roll into the parking lot, half asleep but armed with work gloves, windbreakers and water.  I’ve brought rain pants, kneepads and a hair band to corral my hair under the Kaheawa Wind Power turbines.

Maui Cultural Lands (MCL), a nonprofit dedicated to the reforestation of native flora, leads a weekly expedition up to Hana‘ula on the slopes of Mauna Kahalawai (the West Maui Mountains); planting, watering, weeding and clearing invasive foliage.

It’s been two weeks since volunteers have rendezvoused, and MCL president Ed Lindsey and his wife, Puanani, are anxious to see the result of recent heavy rains on plants they often refer to as “children.”

“A lot of endemic plants need our help,” says Ed.

Today there are five of us hearty souls, but groups as large as twenty-five have gathered, composed of Sierra Club members, corporate work parties, youth groups, students, residents and visitors. “The people who come up make up the community landscape,” says Ed. “We are inclusive to any group of people with like minds and like hearts.”

Participating in this effort is a pass into otherwise inaccessible lands, an opportunity that goes hand in hand with hard work. Once through the wind-farm’s gates, we pile into a four-wheel-drive vehicle for the 3,000-foot ascent above McGregor Point. It’s a slow journey on a vertical gravel road, and I feel as if we are driving straight up to touch the sky.

As the truck crests the first hill, I look back to see a unique perspective of Maui.

Below me the isthmus unfurls, Kealia Pond Natural Wildlife Refuge a flattened blue lagoon and Sugar Beach embracing Ma‘alaea Bay. The silver-gray ocean appears so large there is the illusion of closeness. Planes flying into Kahului Airport are practically abreast of us.

When I turn back to the road ahead, a garden of tall, strange flowers has sprouted—stark white turbines spinning overhead, mechanical monoliths in an otherwise natural environment. It is an impressive juxtaposition. 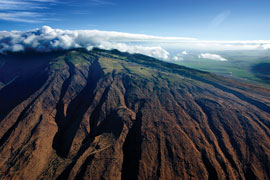 From South Maui, the twenty turbines marching up the ridge may look like a child’s pinwheels, but each is 180 feet tall with massive girth. Plans call for eighteen more turbines.

Ed stops the car and we get out for a better look at some of the indigenous species that Puanani has been pointing out. She is intimately familiar with where each plant grows alongside the road. We walk to a clump of shrubs, and she shows me some soft grayish leaves of a small ‘iliahi (sandalwood) tree.

“This spot is special because ‘a‘ali‘i, sandalwood, ‘akia, ‘ulei and ‘ilima all grow together,” she says. Puanani yanks a handful of dry molasses grass from their midst. “And this is the invasive one.” Molasses grass smothers native plants with its thick matting and accelerates wildfires, a native forest’s worst threat.

As we are talking, Puanani harvests an ‘uhaloa root, knocks the dirt off, and peels it. “This is the medicine, so as kids you never go to the doctor,” she says. She warns us that it’s bitter, but to chew it and swallow the juices. In my mouth it feels like everything goes dry and then saliva flows. I chew and chew. “It tastes a little bit like dirt,” offers one volunteer. “Yes, like earth,” responds Puanani. “But no more sore throat for a few days.”

Back in the truck, we continue the upward climb past intruders: ironwood trees, Christmas berry, molasses grass and fireweed. Looking out across the sweeping molasses grass, I feel a sense of hopelessness. How could our little band reverse such rampant encroachment?

Ed acknowledges the challenge. “We need an army of people to come up and cut out those alien plants,” he says. Then he laughs, “I try to save the world and it doesn’t work, so we are trying to save enclaves.”

I see pukiawe with red, white and pink berries and the spiky red blossoms of ‘ohia lehua. “This mountain is 90 percent endemic,” says Ed. “This is one of the reasons we chose this area as an enclave.”

We don hardhats and step out beneath a towering turbine. It’s like a lighthouse, only with three rotating blades instead of a beacon. I hear a cascading sound like shaken dice amplified a million times, and then as the windmill picks up speed it becomes a rhythmic WHUP, WHUP, WHUP. On a windy day these monsters save Maui an estimated 600 barrels of oil.

Signaling that work has begun, Ed tosses me an indigenous seedling housed in a protective plastic cone. Today we have fifty to plant—mostly ‘a‘ali‘i. “[They’re] soldier plants because they can tolerate the cold, the wet, the dry,” says Puanani. “And most importantly, the wind!” adds Ed Lindsey. On site, the average wind gust is twenty-five mph.

It’s not hard to get the formula right. Ed directs spacing and we dig holes. As I nestle the keiki ‘a‘ali‘i into place, I whisper to them to grow strong and sturdy. We pack down the red dirt, creating moats to help catch water around them. “After about three months, they are on their own,” says Ed. “That’s the secret: to be in their own environment and given the room to grow.”

Despite the wind, I’m warm from physical exertion and start shedding layers. The fine red dust sneaks into my ears, nose and fingernails, outlines the creases on my skin. I wear my dirt like a badge of honor. Shovels in hand, we check on previously planted ‘a‘ali‘i hit hard by washouts from the rain. We toss shovelfuls of dirt over the thin white webs of exposed roots.

I start to feel the muscles in my back and in my legs from bracing on the slippery, shifting slopes.

The overhead whup, whup, casts spinning shadows across the earth as I dig, and for a moment I am dizzy, as if I’m at a disco party. The wind is fierce and the turbine makes strange noises, singing to me.

The more experienced volunteers are slinging expert shovelfuls right on target. My technique is less exact, and Ed teases me good-naturedly. But bit by bit we tuck the plants back into a protected bed of soil.

Mist starts to form in wet droplets. We pile into the truck just as rain pours down, carving muddy rivulets in the roads. I gaze out the window, noticing unfurling fern sprouts, seed pods, bright berries and ‘ohi‘a flowers, all promise of native forest reestablishment.

It may be plant by plant, but each enclave is an indigenous stronghold. The white giants melt into the mist until I can barely discern their blades above. 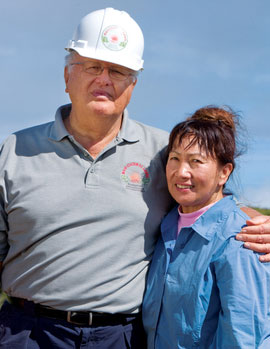 “Having [Lindsey’s] expertise has benefited our program a lot,” says Greg Spencer, senior wildlife biologist for Kaheawa Wind Power. Spencer implements the company’s voluntary habitat conservation plan, ensuring that First Wind is not only in compliance with the Endangered Species Act, but doing all it can to protect the native environment.

Ten years ago, alternative-energy companies explored wind-power possibilities at Ukumehame. The proposed site was former pastureland, previously bulldozed; so according to Lindsey, the addition of turbines would have had a negligible effect on the natural landscape. It was the access road’s construction there that posed challenges.

Lindsey and other community groups raised concerns over the displacement of struggling native plants and the risks to endangered species, specifically nene (Hawaiian geese).

Fortunately, studies of goose populations at other wind farms have demonstrated a “learned turbine avoidance” among the birds, and so far that appears to be true at Kaheawa, too. “They are pretty agile flyers,” says Spencer.

But birds, bats and bees need a native habitat to thrive, and First Wind and MCL quickly realized they shared the same goal. A cooperative relationship bloomed between them as road construction commenced. Volunteers collected indigenous seeds, which were nurtured into seedlings at Ho‘olawa Farms in Ha‘iku, and replanted post-development. “We’ve kept the gene pool of the area,” says Spencer.

And as it turned out, the carefully engineered road has been a boon for MCL. Previously, the Lindsey family journeyed three hours over a rough, rutted jeep trail to reach Hana‘ula. Now the drive takes a mere thirty minutes. “It’s [enabled] a wider range of folks to come up and volunteer,” says Spencer.

Besides improved access for research and plant propagation, MCL and First Wind share water tanks, work crews and information about flora and fauna. First Wind plans to plant an additional 15,000 native shrubs this year, welcoming assistance from MCL volunteers. To participate, call Ed Lindsey at 575-8085, or visit www.mauiculturallands.org or www.kaheawa.com for more information.