Sitting in the sunny kitchen of Edward and Sally’s Kula home, I feel as though I’ve boarded a time machine back to the late 1930s, when the house was constructed. Antique clocks fill the air with their ticking, chiming at random. “We love our clocks, but you can’t pay attention to them for the actual time,” Sally says ruefully. “We have one clock we purchased at a discount store that is accurate.”

It’s not the venerable timepieces that have me feeling out of sync with present day. It’s the way Sally and Edward have honored the past in restoring this historic home.

Oldtimers knew this part of Upcountry Maui as Erehwon — a sprawling cattle ranch whose name, spelled backwards, is “nowhere.” In the early decades of the last century, when Gordon and Mary von Tempsky owned the place, Erehwon was famed for its hospitality.

Edward and Sally were residing happily in Olinda when the house went on the market in 2010. “The listing said, ‘This storybook home . . . is charming, funky, and spacious, and may be a tear down or the dream purchase of a lifetime,’” recalls Sally. “We enjoy fixing up old houses; the soul of an old home is something you can’t create on your own.”

Visiting the site, they were captivated by the setting and the view. And they could see that the house had good “bones,” despite its condition. But the first contractor they spoke to tried to dissuade them from renovating. “If you want to tear this one down,” he told them, “I’ll build you a new house. It’ll be cheaper than fixing this one up.”

Enter Edward’s lifelong friend Joe Hartley, a general contractor. “We hadn’t thought of Joe, because he usually does new construction,” Sally explains. “He was at dinner at our previous home and said, ‘I heard you bought that old house. I’d love to do the reno.’ We were ecstatic.”

Edward and Sally wanted to maintain the home’s authenticity — especially the windows, which were one of its main attractions. “If we’d had to tear them all out, it wouldn’t be the same house,” says Edward. And the windows are lovely, with their white wooden casements and panes of glass that the years have distorted slightly. “When we remodeled the kitchen, we had new windows custom made to match the others in the house,” Joe says.

Early on, they noticed that the windows are set unusually low. “We made built-in seats on either side of the living-room fireplace,” says Edward, “so our guests can sit and enjoy the view.”

A large portion of the renovation budget went into the kitchen, which contained a brick oven that, according to Edward, was more like an indoor barbecue. They added an arch and new brick; now it’s the focal point of the kitchen.

One of the toughest challenges to test Joe’s skills was when Edward learned his parents were sending a grandfather clock, circa 1790 — and nine feet tall. “We have eight-foot, three-inch ceilings,” Sally says.

“It would have cost a fortune to raise the living-room roof to accommodate the clock,” Joe says. Instead, he built a high-ceilinged alcove in the hall between the bedrooms; the clock is fully visible from the living room.

The master bathroom was also redesigned. “It looks like an old period bathroom, yet it functions like a modern one,” says Joe. The bath’s crowning glory is the new cast-iron, claw-foot bathtub. “We had to bring the tub in through the bathroom window,” says Joe. “All of the doors are too narrow.”

“What a scary day,” says Sally. “I took one look at the workmen lined up outside, and said, ‘I’m outta here.’”

Joe’s crew used a backhoe to lift the tub out of his truck and onto a wood platform they’d placed between the rock wall outside and the windowsill. “It took a good couple of hours to slide the tub in, rotate and place it,” says Joe, “but we didn’t damage a thing.”

Edward devotes a lot of time to rejuvenating the property’s abundant landscaping. “Most of the terracing was already in place,” he says. “We’re slowly adding trees and vegetation similar to what was here during the home’s heyday.” He was even able to resurrect long-dormant dahlias, the size of dinner plates, outside the kitchen window.

Edward and Sally show me the covered lanai where Countess Alexa von Tempsky Zabriskie, sister of the original owners, entertained servicemen during World War II, and the barbecue they built for her. A magnificent mural of tropical flowers in acrylic on canvas occupies the lanai’s only wall. Camille Dubois, a distant relative of Edward’s, painted it in the 1940s. “It was in very poor shape when we purchased the property,” Sally tells me. “But our friend [Maui artist] Jan Kasprycki is restoring it. He comes over about once a week to work on it. We call the mural ‘Camille,’ like Jan does. He has almost a spiritual connection to the mural, having dreamt that Camille gave him permission to begin the rehabilitation.”

Like the countess, Edward and Sally like to entertain on the lanai. “We start early so our guests can enjoy the view, the sunset, and the grounds,” Edward says. In fact, front and center as you gaze at the bicoastal view are colossal blue hydrangeas. “We begin by having drinks with Camille,” Sally says. “As it gets chilly, we migrate to the house. We redesigned the kitchen so our guests can come and go freely.”

“We like a casual approach,” Edward adds. “We say, ‘You’re our friend. Here’s your first beer, and after that you can help yourself.” 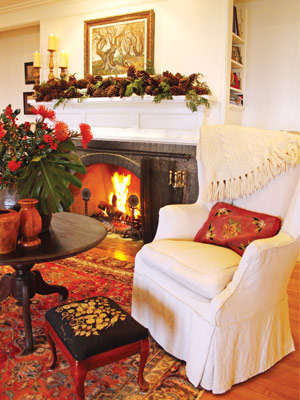 Last year, Edward and Sally celebrated their first Christmas in their newly renovated home. “I think the fireplaces are what make entertaining here during the holidays so special,” Sally says. “The cooler climate and roaring fires make it feel more like Christmas for our ‘down country’ friends.”

Edward agrees. “It starts with the drive on the upper Kula highway to get here. It’s like going to Grandma’s house for Christmas dinner.”