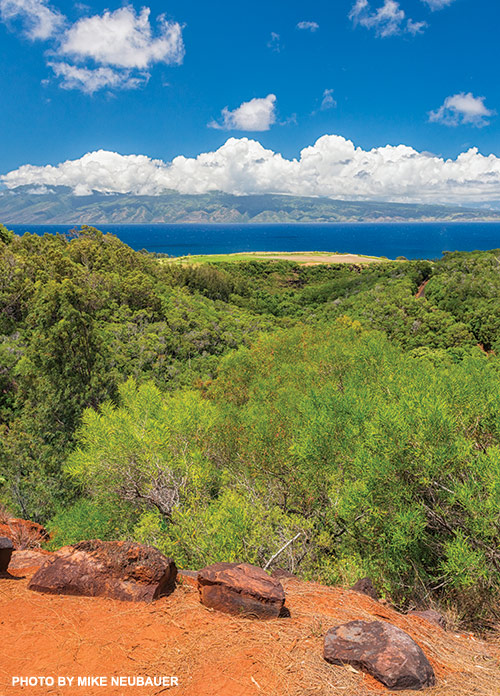 Scrambling further up the mountain, we pause at the cliff’s edge where the curtain of foliage clears just enough to reveal neighboring Honolua Valley. Folds of green stretch before us, eventually spilling into the distant ocean. Moments later we arrive at the trail’s crown jewel: a narrow clearing with panoramic views of the Pu‘u Kukui Watershed Preserve.

Here at the upper reaches of Mauna Kahalawai (commonly called the West Maui Mountains), we peek into Kapalua’s backyard, a series of undulating hills so lofty they kiss the clouds. I survey Pu‘u Kukui with wistful wonder, for it’s one of the rare spots on the island whose access is strictly controlled. There’s a good reason most people will never set their boots there. This 11,611-acre utopia is one of the wettest spots on Earth and protects native plant and animal species found nowhere else in the world.

I’m happy to marvel at pristine Pu‘u Kukui from a distance, for today’s route has already offered a rich collection of natural wonders. It’s also emphasized the importance of protecting the endemic plants that are still here.

“You get to see some beautiful native plants, and also what an invasive like waiawi does to the forest,” Ward laments.

Waiawi, or strawberry guava, is a deceptive foe, with its delectable fruit and handsome wood. As we walk under the waiawi canopy, it takes just a few steps until my soles are coated in the pink and yellow slime of crushed fruit. The aggressive alien invades native forests, sprouting dense thickets that choke out diverse indigenous species, reducing the amount of water flowing to our aquifers, and spreading fruit flies to vulnerable crops.