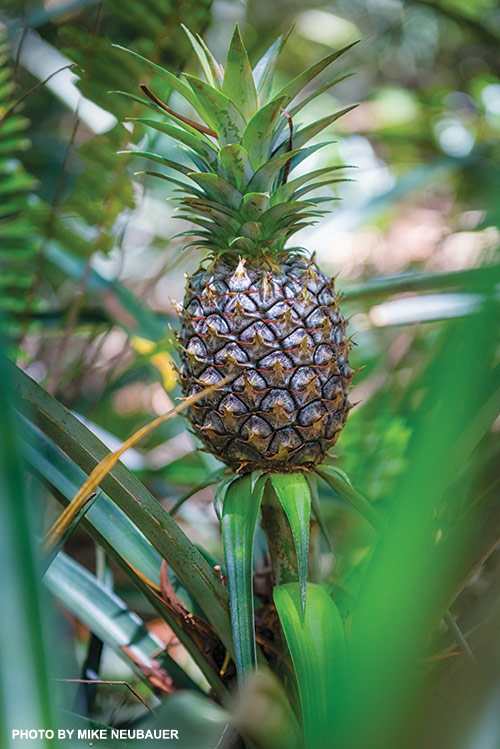 Before long, we see wild pineapple dotting the landscape, a reminder of Kapalua’s plantation past. In 1912, Fleming and landowner Harry Baldwin planted the first 20 acres of pineapple fields at Honolua Ranch, establishing what would later be known as Baldwin Packers. By 1923, the company owned and managed more than 22,000 acres of agricultural land in West Maui. Baldwin Packers merged with Maui Pineapple Company (later named Maui Land & Pineapple Company, Inc.) in 1962, and the spiked-top fruit remained as one of Maui’s main exports until operations shut down in 2009.

The shelter of the forest thins, indicating we’re nearly at the end of the trail. We pass the Plantation Golf Course and Mahana Estates, a new community under construction at the resort, before arriving at Fleming Beach, which affords plenty of liquid therapy after a long day’s walk. I joke with Joe that, although we’ve walked in one big loop, it feels like we’ve been on three different hikes.

“You get a complete mauka [inland] to makai [ocean] experience without having to travel very far,” he smiles. “And that’s the beauty of Kapalua.”

The Maunalei Arboretum Trail is open to the public, reached by catching a complimentary shuttle to the trailhead (the easy way) or hiking the Mahana Ridge Trail from Kapalua Resort (prepare to sweat). Signups are required for either option. Access to the arboretum is through a private neighborhood that permits Kapalua Resort shuttles on its roadways — but not private vehicles or pedestrians. The shuttle operates on a limited schedule, departing from the Kapalua Village Center located at the corner of Office and Village roads. Contact Kapalua Shuttle at (808) 665-9110 to book your trip.