“One thing I can’t stand is girls riding (or attempting to ride) big waves. Why? Well, you see, girls are much more emotional than men and therefore have a greater tendency to panic. Girls … are intended to be feminine, and big-wave riding is definitely masculine.” Buzzy Trent, big-wave surfer, 1963

If you have any sort of moral compass, this quote from Buzzy Trent surely raised your hackles. But until recently — more recently than you’d imagine — female surfers were viewed through this blurry lens of machismo. For decades, these underrated, unsung heroines of the sea were forced to navigate gender discrimination, unequal pay and decidedly bad vibes. Magazines wouldn’t cover them, competitions refused to include them, and nearly everyone — even those who knew better — insisted that the huge, heavy waves of Pe‘ahi (aka Jaws) on Maui, Mavericks in California and Pipeline on O‘ahu were much too dangerous for a woman’s weaker, more fragile physique.

Fortunately, the tides have turned, and female athletes everywhere are carving through big waves, and even bigger stereotypes — including these wonder women of Maui. Now regulars in a lineup of big-wave icons, our local wahines are on their way to becoming legendary themselves. 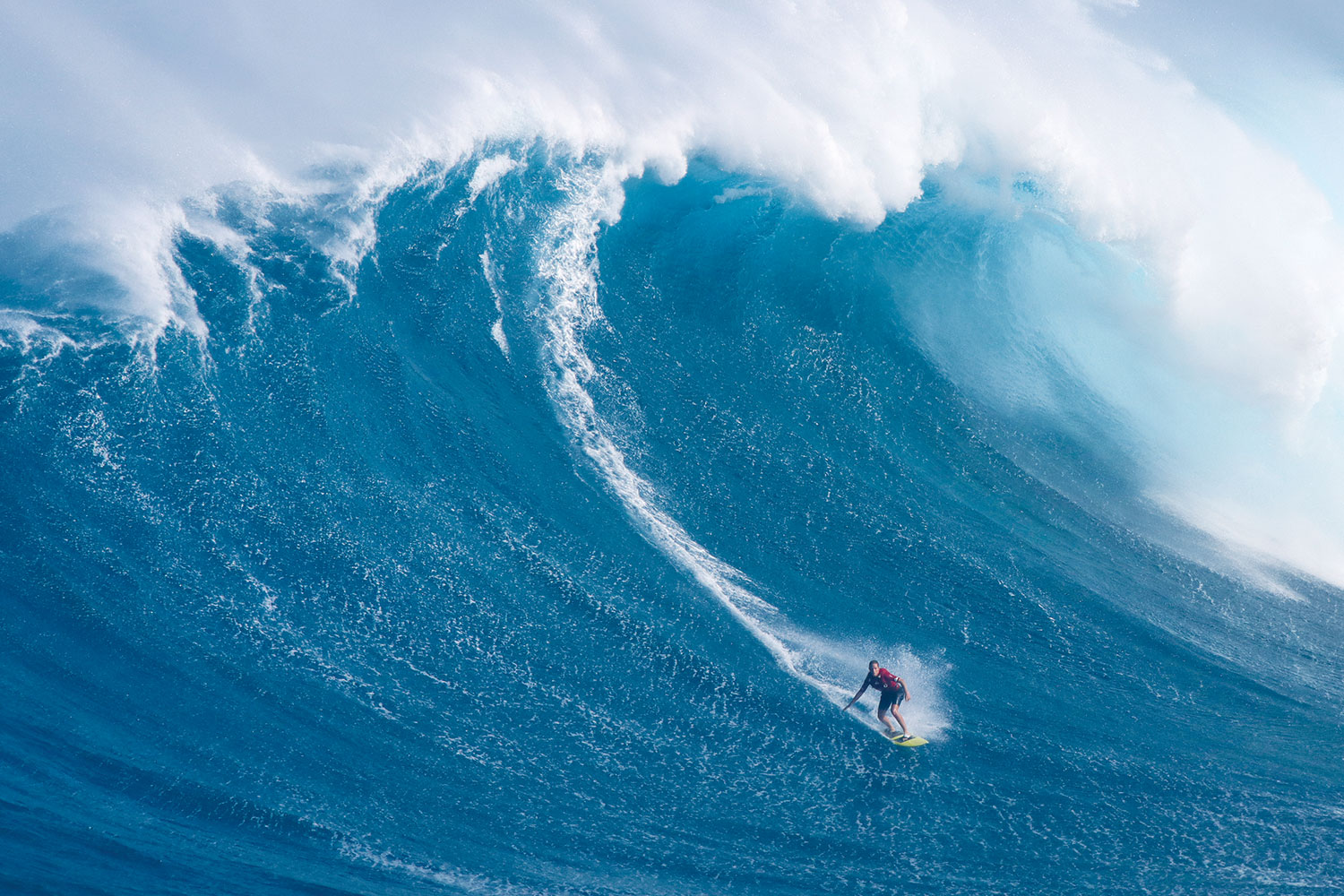 Being a self-taught surfer is an anomaly, especially when it comes to big waves, but such is the story of Paige Alms. Her family moved to Maui when she was nine years old, and by age 10, Alms was a regular at Ho‘okipa. At age 15, she was introduced to some monster waves along an outer reef on Maui — and instantly knew her future. “I had never seen waves like that,” she recalls. “I was terrified but also intrigued. They were beautiful, clean and perfect.”

Alms began competing in big-wave events, starting with the Nelscott Reef Big Wave Classic in 2014. “It was where most of the big-wave women met and connected,” she says. In 2016, she won the first-ever World Surf League women’s big-wave event, the Pe‘ahi Women’s Challenge, a victory she repeated in 2017. But these wins were bittersweet. Women were still being excluded from most big-wave surf contests, and the men out-earned them in both prize money and sponsorships — by a lot. Alms did whatever it took to raise the funds to stay competitive, working all manner of odd jobs from house painting to car-ding repair.

Frustrated, Alms teamed up with other female athletes, including Keala Kennelly, Bianca Valenti and Andrea Möller, and formed the Committee for Equity in Women’s Surfing. “We worked to get female representation in the Mavericks surf event [in California] … and equal pay in WSL events,” she says. And they succeeded: In 2018, the WSL opened all big-wave events to both genders, and surfing became the first international sport to offer equal pay for men and women.

Since then, Alms has tackled some of the biggest surf — and surfers — on the planet. She is a two-time WSL Big Wave World Champion, and most recently took Best Paddle and the Yeti Best Ride in the 2022 Red Bull Magnitude. She uses her platform to highlight environmental efforts and to advocate for women’s empowerment, and is currently campaigning for the media to depict women as athletes, not as eye candy. Ultimately, Alms says, she wants to inspire more women to go for their dreams. “I’m proud to stand (or paddle) next to friends who are helping shape the sport, creating opportunities for the next generation,” she says.  paigealms.com | IG/FB @paigealms | IG @sos_shapes 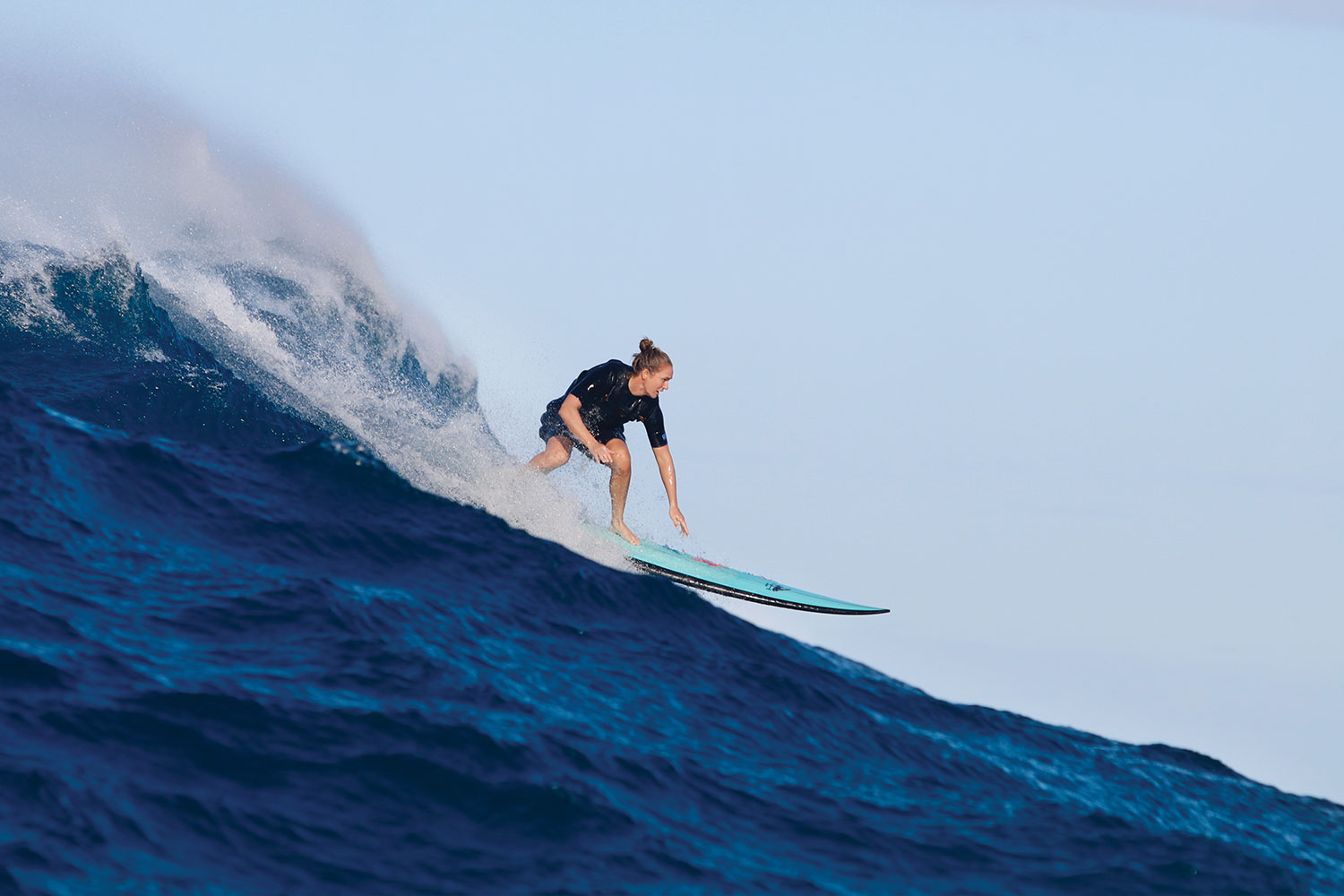 Skylar Lickle has been going to Pe‘ahi for as far back as she can remember. Her father was one of the pioneers of tow-in surfing, and as soon as she could walk, Lickle and her mother were there for every swell, supporting her dad from shore. Naturally, her father was the first person to tow Lickle into a big wave, and is still her partner in tow today.

Perhaps as a result of her upbringing, Lickle is self-assured and at ease around her male counterparts in the water — though she knows it wasn’t always so kumbaya. “I only feel positive vibes and support,” she says of male Maui surfers such as Kai Lenny and Ian Walsh. “I know that women struggled in the past, so my experience has to be taken with a grain of salt. I am lucky to be part of the turning point in the sport.”

Lickle isn’t one to stand on the shoulders of others, however, and works hard to succeed. Off-season she prepares herself physically and mentally to tackle the relentless, towering walls of water she loves, and every chance she gets, she’s out there shredding.

Her efforts have not gone unnoticed. In 2019 she was invited to compete at the Jaws Big Wave Championships (she placed 9th), as well as two other contests that were subsequently cancelled (one for weather and one for Covid). Finally, in 2021, Lickle was invited to the Red Bull Magnitude big-wave competition, a new event for women and a new contest format for the sport. “With every swell, Red Bull sent out videographers, photographers and water safety teams,” says Lickle. “They captured all our rides over the course of three months, and at the end I chose my three best waves to submit for consideration.”

The footage was judged by a panel on wave size, commitment, consistency and style, and when all was said and done, Lickle earned the Overall Award. “For my age and skill level, being competitive in big-wave surfing is a very good possibility,” she says. “Most big-wave contests are by invitation only, so if one comes around, I am ready for the challenge. If not, I will continue to build more confidence, and will strive to be my personal best self.”  IG @skylar_lickle | @bigwavepottery 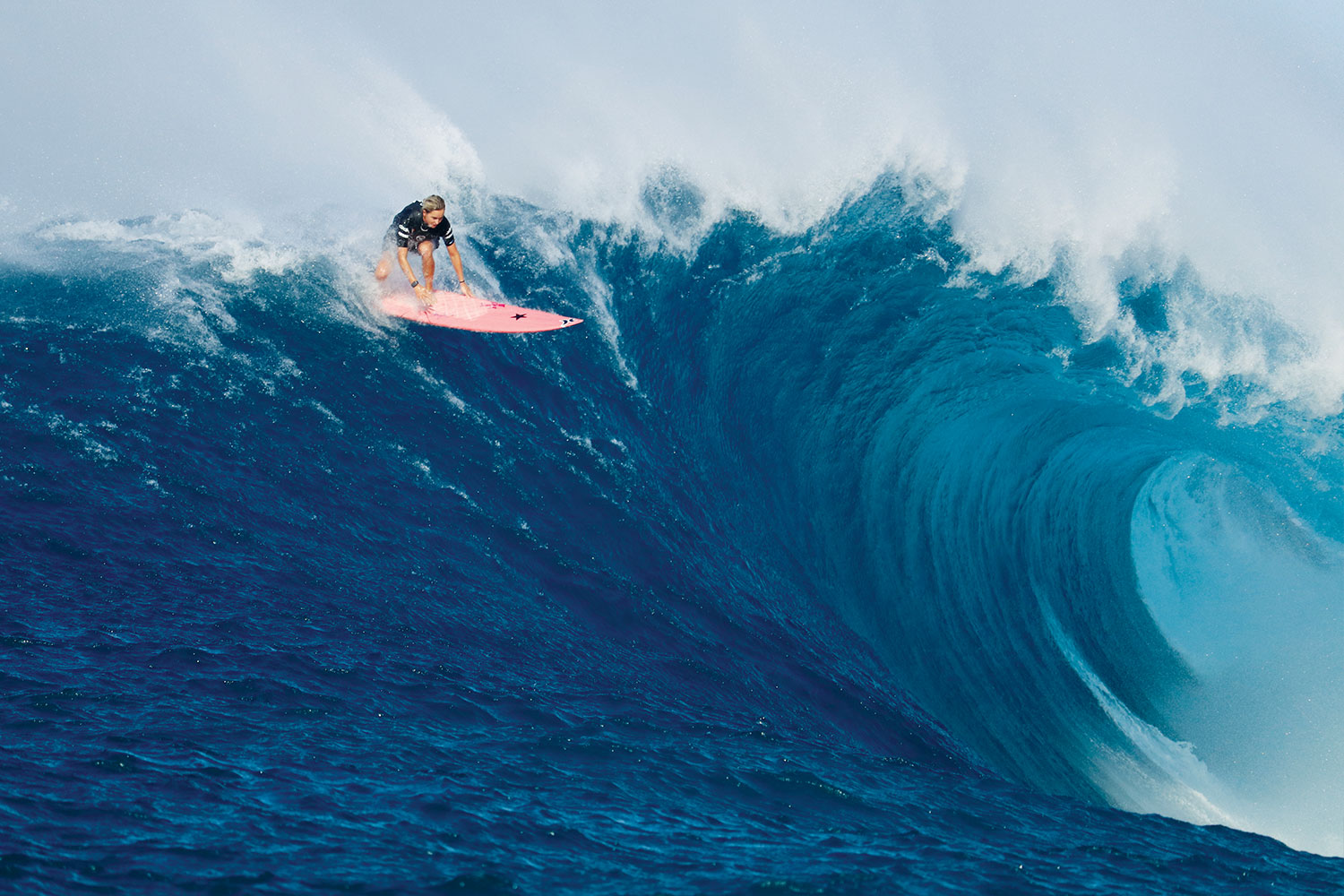 Annie Reickert was just 17 when she first paddled into Pe‘ahi. It was a picture-perfect day, and in an unusual turn of Maui weather, there wasn’t a lick of wind to mar the glassy sea.

“Paige [Alms] called me and said that that today was the day,” remembers Reickert. “Bianca [Valenti] and Keala [Kennelly] flew over from O‘ahu to join our session, and we launched the Jet Skis from Maliko. We got on our boards and paddled out, and for a brief moment, Paige, Bianca, Keala and I were the only ones in the lineup. Then Paige called me into a wave alongside her and we took off together. She was cheering the whole time! When we pulled off into the channel, we had the biggest smiles on our faces. Paige is one of the pioneers of female big-wave surfing, so [catching] my first wave out there with her was amazing.”

This femme-friendly scene would have been impossible just a few years ago, a fact that Reickert readily acknowledges. “When it comes to Jaws, I don’t feel much — or any — hostility directed at me for being a female in the lineup, and in large part, that’s due to Andrea, Bianca, Keala and Paige proving to the world just how capable women are in a big-wave setting,” she says. “I don’t think the unfair treatment of females in big waves is gone by any means, but as more and more of us get into scene, it will a lot harder for people to pass inaccurate judgements.”

Negative commentary becomes even harder to justify when you consider Reickert’s performance. In 2019, at age 18, she was invited to compete in the WSL Jaws event as a wild card, where she placed 3rd. She went on to win the Best Tow and People’s Choice awards at Red Bull Magnitude in 2021, and in 2022, she received Biggest Paddle at the Red Bull Big Wave Awards.

“The new generation of females are finally getting the recognition they deserve,” says Reickert. “It’s been really cool to watch the progression of women in surfing, and getting to be a part of that journey is very special.” IG @annie_starr | FB @annie.reickert 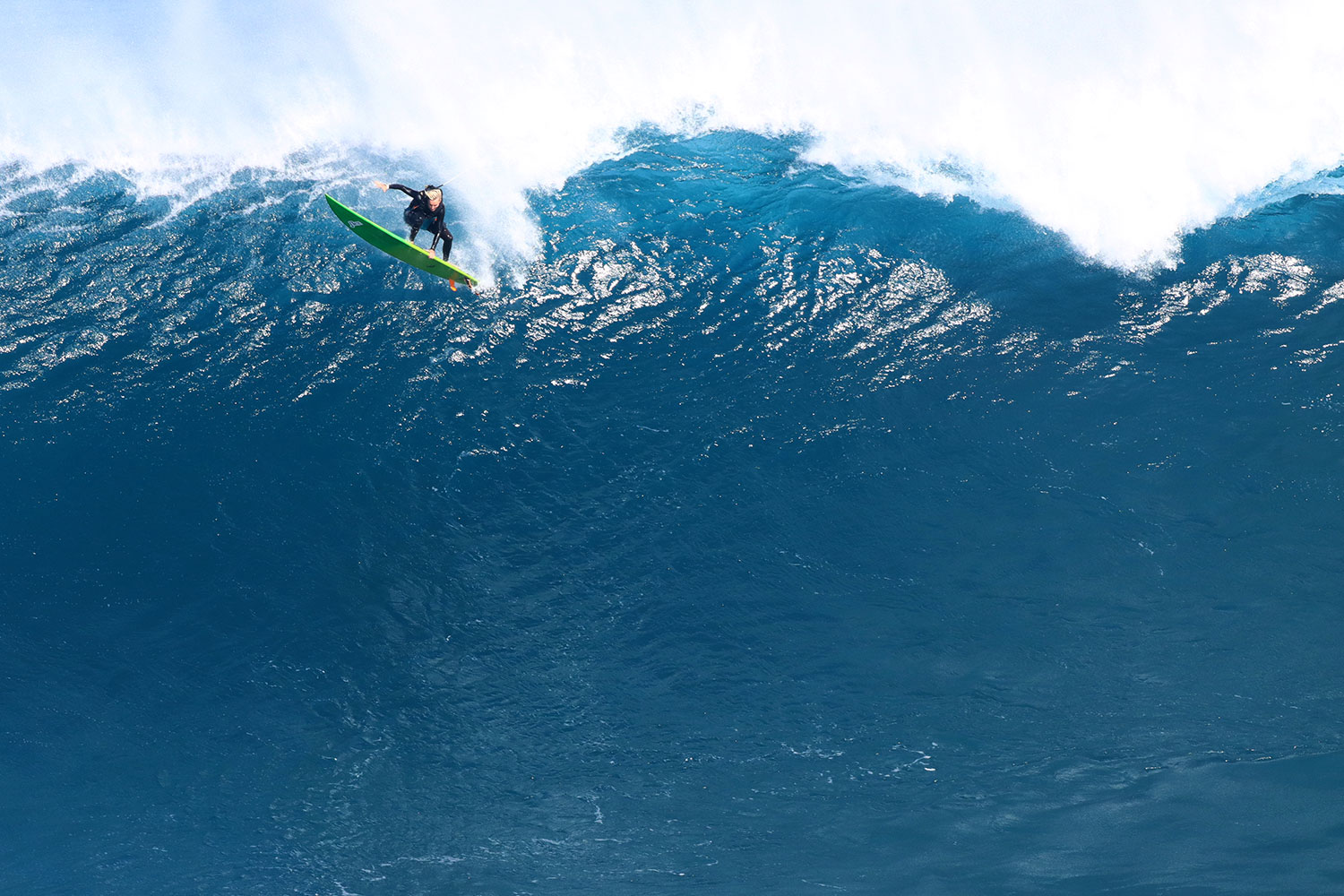 The Matriarch of the Monsters: Keala Kennelly

One cannot discuss these pioneering waterwomen without including Keala Kennelly. The Kaua‘i native is a trailblazer when it comes to women in surfing, and especially as it pertains to big-wave events. In 2005, Kennelly was the first woman to ride the notorious Teahupo‘o break in Tahiti, and in 2010, she won the first-ever women’s big-wave contest, the Nelscott Reef Big Wave Classic in Oregon. In 2016, Kennelly beat out the world’s best male big-wave athletes to win the Pure Scot Barrel of the Year at the XXL Big-Wave Awards, making her the first woman in history to win an open gender category in the surfing world. These are just a few of her amazing accmplishments, and she continues to break down barriers today.