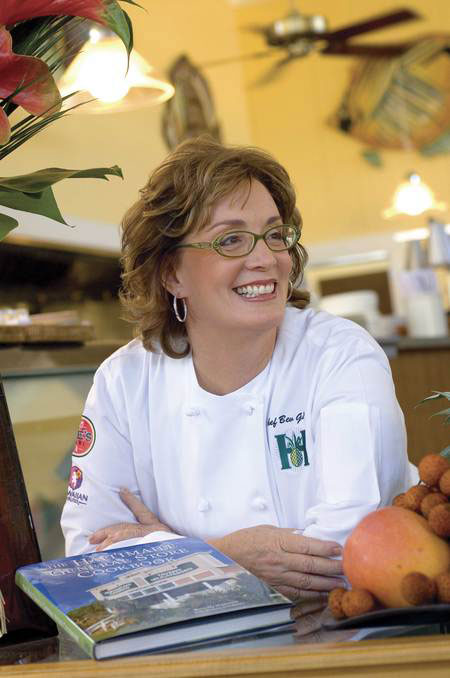 A woman’s place has traditionally been in the kitchen, yet in the heady world of fine dining, female restaurateurs are a rarity. Not so on Maui. Three of this year’s ‘Aipono Award recipients demonstrate that often the feminine touch is a winning one. And far from being new to the scene, these ladies helped lay the foundation for Maui’s dynamic restaurant industry.

When Beverly Gannon opened Hali‘imaile General Store in 1988, she hadn’t punched the clock in a restaurant before. Texas-born, with a hint of an accent and a heap of Southern hospitality, she’d built a following while catering parties out of her home. The store was intended to be a place to host events and sell gourmet food to-go; she didn’t want a restaurant. But her fans had different ideas. The day she opened, 150 people waited at the door. She gave in. Now, in addition to her catering company, Gannon owns two award-winning restaurants—Hali‘imaile General Store and Joe’s Bar & Grill—and consults on a third, the brand new Lana‘i City Grill.

“The restaurant business is a real addiction,” says Gannon. “If you’re passionate about it and you really love feeding people good food, you’re always looking at the next step.”

As one of the pioneers of Hawai‘i Regional Cuisine, Gannon helped create a new tradition of incorporating local produce and flavors into palate-pleasing dishes such as duck lumpia, basil and macadamia nut-encrusted ono, and her popular sashimi Napolean—a tower of fresh fish layered with wasabi cream, ginger, and wontons.

“I think that in order to be a chef or a restaurateur, it really has to be your life,” says Gannon, when asked why more women aren’t following her lead. “I get my nurturing through my guests and my employees. A lot of women need the nurturing of having children. Forty-hour-a-week jobs [still] allow them to spend time with their family. A restaurant is an eighty-hour-a-week job, a hundred-hour-a-week job.”

Gannon’s workweek is especially demanding. In addition to running restaurants, she acts  as an ambassador of sorts for Hawai‘i’s unique flavors, appearing on national TV, cooking in the James Beard House, authoring cookbooks, and designing gourmet in-flight meals for Hawaiian Airlines. The jam-packed schedule suits her just fine. “I love every minute of every day of my life, as crazy as it is,” she says.

And it’s no wonder—this is a banner year for our homegrown celebrity chef: Hali‘imaile General Store is celebrating its twentieth anniversary and Gannon was just named Hawai‘i’s Small Businessperson of the Year.

Before opening her first restaurant, Jennifer Nguyen admits with a laugh, “I thought it would be easy.” Fifteen years later she says, “It’s a challenge, but it’s a lot of fun. I wouldn’t do anything differently.”

Nguyen opened A Touch of Saigon on Lower Main Street in Wailuku in 1992. Customers barely trickled in, dissuaded by the dull location and lack of parking. After one particularly slow night, Nguyen phoned her mother in Vietnam, in tears. Mom, a home-economics teacher, offered some sage advice: Use fresh ingredients. Give each customer quality service. Take it one day at a time. These instructions—along with some knockout family recipes—got her daughter back in the game.

Nguyen began garnishing every dish, from the sizzling steak to the whole steamed ‘opakapaka, with fresh herbs grown organically in her garden. Her pho—a rich Vietnamese beef soup—included two secret herbs courtesy of her mother. After a year’s time, she’d outgrown her parking-challenged location. She found a roomy spot beside the Main Street bridge and A Saigon Café was born. She didn’t have to advertise; word of mouth soon delivered scores of hungry patrons. The restaurant has become a Central Maui staple—the go-to place for everyone from local politicians to theatergoers.

A gracious hostess with a winning smile, Nguyen describes herself as the owner, maitre d’, menu interpreter, waitress, sometimes cook, and chief bottle washer. She’s also quite the team captain: her joke-cracking employees have acquired a fan club of their own.
“When I start something,” says Nguyen, “I give myself a goal. When I moved in [to A Saigon Café] I said, ‘In five years I will own this place.’ It took seven years, but I own it.” Nguyen purchased the land where her restaurant and two apartment complexes are located. She plans to transform the first-floor apartments into an open-air, Vietnamese-themed market.

“It’s nice to be my own boss,” she says. “I’m too independent and strong-minded to work for someone else.”

Don’t let the tough talk fool you—Nguyen’s a softie at heart. She celebrates holidays by cooking turkeys for underprivileged families and regularly donates her time and food to local charities.

Back in 1973, when Doris and Floyd Christenson opened Mama’s Fish House, Maui’s fine-dining scene was in its infancy. “Eating out” generally meant patronizing the local steakhouse; nobody ate fish in restaurants back then—certainly not on the island’s remote north shore. Well, the Christensons changed that. Thirty-five years later, Mama’s is still the destination for those seeking to experience the sensual flavors and authentic hospitality of old Polynesia. And while the restaurant’s resounding success belongs to both the Christensons and their loyal staff, it’s obvious that it couldn’t have been done without “Mama” Doris.

“We thought we’d sell the restaurant at first,” she says. “But after we got started, it was fun. It’s an exciting business to be in. You’re putting on a production for people.”

The couple decorated the restaurant’s interior with artifacts collected during their four-year sailing adventure throughout the Pacific Islands. “That was our original décor because that’s what we had,” Christenson laughs. She hoped to recreate the romance and warm welcome experienced during their travels. The menu featured dishes reminiscent of Moorea, Bora Bora, and old Hawai‘i: fresh lobster, opah steamed in banana leaves, and shimmering slivers of ‘ahi served with fern shoots.

“A lot of visitors had never really had fresh fish out of the ocean, so they were dazzled,” says Christenson. Locals were won over, too—Mama’s quickly became the spot for special occasions. From humble beginnings, the beachfront restaurant grew into a remarkable institution employing over 200 people (including construction, landscaping, and laundry staff) and serving more than 800 meals a day.

The Christensons continue to supervise the restaurant’s daily operation, ensuring that every detail—from the shell-inlaid entrance to the spectacular “Polynesian Pearl” dessert—fits their original vision. Doris occasionally brings in her own recipes and works them out with the kitchen staff.

“She is an excellent cook,” says Executive Chef Perry Bateman. “Her style is classy. It’s comfort food, but healthy and elegant.” The crab cakes on the menu are hers, as is the lobster guacamole—a recipe she borrowed from a French restaurateur in New York, then spruced up with Tahitian lime and H¯ana ginger. But the contribution Bateman most appreciates is the example set by his employers’ relationship. “I’ve never seen a couple married so long, still so much in love. It inspires all of us,” he says.

Indeed, to those who know Doris and Floyd, singling out one of the pair for special praise might seem odd. But according to Bateman, “Mama Doris is the heart.” And, though it may be because her husband is such a gentleman, when push comes to shove, “Doris always wins. She definitely has the last call.”