Tylun Pang grew up in Hawai’i enjoying the freshest island ingredients in his father and grandmother’s Chinese kitchen. With a culinary career spanning over four decades taking him throughout Asia, South America and across the United States as a chef with Westin Hotels, Chef Pang returned home to Hawai’i in 1996 to lead the culinary programs at Fairmont Kea Lani in Wailea, Maui. Pang oversees the luxury resort’s five dining venues and one market, banquet and catering as well as, developed the concept for the resort’s signature restaurant – Kō.

Many recognize Chef Pang for his participation in the Best Hotel Chefs of America Series at the James Beard House in New York, as well as his dedication to local agriculture, the island’s culinary school and mentorship of future chefs. 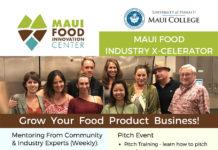 The Art of Cassie Pali

Our dining editor learns how to produce edible mushrooms from mycologist Charles Tresidder.