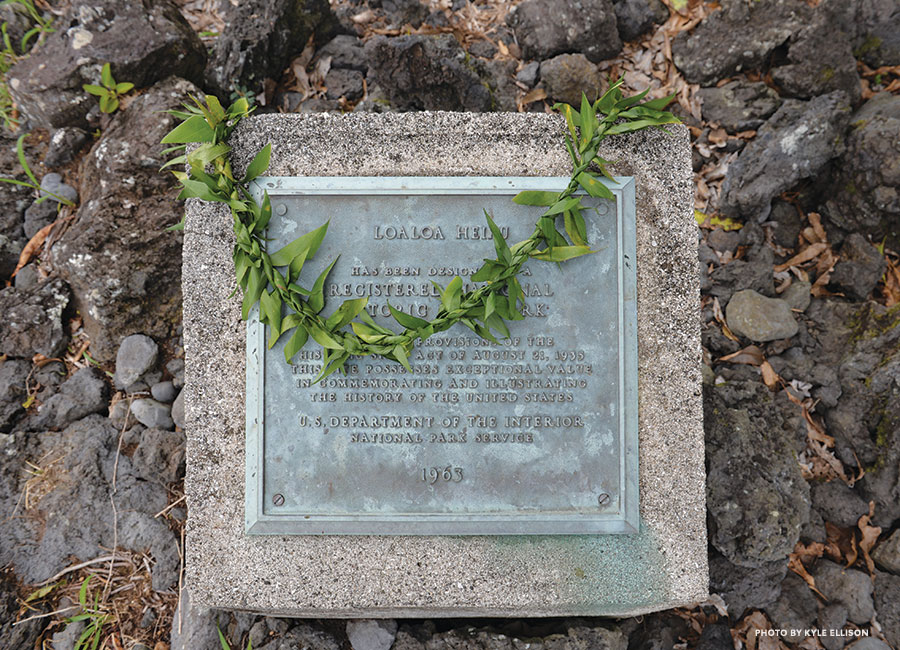 So what spurred this handful of friends to tackle such an ambitious and arduous project?

Woodburn doesn’t cite a specific reason, but having spent so many years in Kaupō, becoming, himself, a student of the region’s history, he sees these efforts as a way to give back to a place that’s given him so much. He says, simply, “This was the right thing to do.”

Standing atop the lofty structure, where the view stretches up into Manawainui Valley and down to the ocean below, removes any doubt that Lo‘alo‘a was a place of importance and power. “If you look at it for long enough,” Woodburn tells me, “you start to make out where different artisans worked on different sections of the walls.”

I’ve visited a lot of heiau in my life, and it’s the first time I’ve considered these temples as built not by workmen stacking rocks, but by craftsmen. Then again, I’ve never devoted hundreds of hours to clearing brush from ancient walls and a platform whose unmortised rocks make for wobbly, precarious footing.

Maui historian Andrew Walmisley has spent time here, and calls the heiau “hauntingly beautiful.” “Haunting” may be the operative word. Kaupō Ranch manager Bobby Ferreira tells me there’s so much energy around the stones that horses have refused to get near it.

Enlightenment may be Lo‘alo‘a’s greater power. Maui youth have participated in cleanups here, and Jimmy Haynes, a co-owner of Kaupō Ranch who has Hawaiian lineage, sees bringing those young people to the heiau as “an opportunity to show [them] their past and the structures their civilization built. It’s a blessing to be able to share that.”

Respectful of its cultural heritage, the volunteers begin every visit with proper protocol: requesting permission before entering the sacred site. The day I visit, Kawika Burgess, CEO of Hawaiian Islands Land Trust, makes that request in a Hawaiian chant. While HILT isn’t directly involved with privately owned Kaupō  Ranch, the conservation nonprofit oversees similar projects around the state. “It’s vitally important that we conserve the most significant historical and cultural sites,” Burgess says. “If we lose or diminish the natural beauty and the storied places that sustain our culture, we lose the essence of Hawai‘i.”

Lo‘alo‘a heiau is on private land and is not accessible to the public. If you’re interested in learning about ancient sites in the areas surrounding Kaupō, contact Hawaiian Islands Land Trust about their guided hikes at nearby Nu‘u Refuge. HILT.org; 808-791-0729