Despite its historical importance, Lo‘alo‘a fell out of use after Prince Liholiho assumed Hawai‘i’s throne as King Kamehameha II. Liholiho abolished the islands’ polytheistic religion and ended the kapu system of laws that had dictated ancient society. That took place in 1819, although Fisher has noticed in oral accounts from Nu‘u, just a few miles west of Kaupō, that villagers clung to traditional religion long after it ceased to be openly practiced elsewhere. 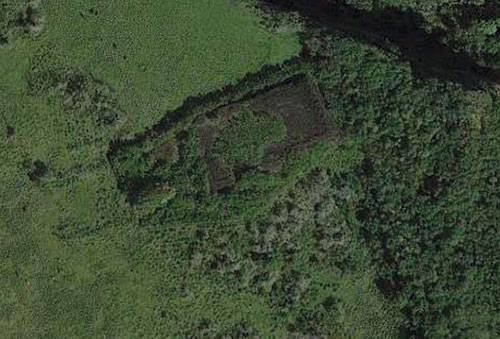 Over the decades, Lo‘alo‘a succumbed to nonnative plants and feral ungulates that altered the landscape. In 1962 a National Park Service publication noted, “the heiau is in an excellent state of preservation,” but “difficult to reach because of the heavy growth of vegetation.” A cleanup likely occurred soon after, and in 1963, Lo‘alo‘a was officially listed as a National Historic Landmark. But by 2017, it was overgrown again; you could barely see the rocks for the weeds. Invasive trees like koa haole and Christmas berry insinuated their roots beneath the stones, creeping into crevices and threatening to undermine the whole structure.

Hawaiian cultural practitioner Kimokeo Kapahulehua knew of the Kaupō site, as did his friend and longtime Maui resident Jamie Woodburn. The two men met with Patrick Kirch to learn about the heiau’s past, and how they could help save it. With permission from Kaupō Ranch, and the aid of fifty volunteers from the Hawaiian Outrigger Canoe Voyaging Society, the duo kicked off a cleanup effort that would last more than eighteen months. Kapahulehua soon had to leave the project, and for most of the time, the work was done by small groups of volunteers, but week after week, it was Woodburn and another friend, David Lawrence, who worked to rescue Lo‘alo‘a from the brush. “We went through a lot of chainsaw chains,” Lawrence says with a laugh. “What’s important is that we’ve eliminated the plants that would have eventually destroyed it.”