Among island residents, and even within the Hawaiian community, not everyone agrees on what an ‘aumakua is, what its role may be, or who is entitled to claim one.

“Many Hawaiians have a broad view of the culture,” says Hokulani Holt, an expert in Hawaiian language and culture, a master kumu hula (hula teacher), and director of cultural programs at the Maui Arts & Cultural Center. “One may tell you, ‘You’re a good friend of our ‘ohana, our family, so you can have our ‘aumakua.’ Another may say, ‘If the same turtle comes to you every time you go out snorkeling, that’s your ‘aumakua.’ As a traditionalist, I would disagree. You can have a ‘guide,’ ‘a guardian angel’ . . . a myriad of other words, but not an ‘aumakua. That word is defined [genealogically] in the culture.

“‘Aumakua are family members who have died and been deified, returning in a different form,” Holt explains. “‘Deified’ is the operative part; it was done by a kahuna [priest]. The gods indicated who should be deified. The kahuna interpreted and relayed that information to the family, and performed the ceremony.

“Everyone had at least one ‘aumakua.” she adds. “If you married and had children, their [ancestors] on both sides would come into the genealogy. They’re family; they stay with the family for generations.”

Often the form an ‘aumakua would take depended on where family members lived and how they earned their livelihood.

“If you were ocean people,” says Holt, “it would be good to have a shark as an ‘aumakua. If you were mountain people, pueo, ‘io [Hawaiian hawk] . . . birds would be helpful. If you were Pele people, the form your ‘aumakua took might be related to lava. The form was a way of placing you within the family, within society, and within nature.

“As in all things Hawaiian, there was a hierarchy in the ‘aumakua realm,” she adds. “Some of the highest in the hierarchy are those ‘aumakua that come from the very far past and are probably related to the ali‘i [royalty]. ‘Aumakua that come from the beginning of time have more ‘seniority’ than those created in the 1700s. Part of that is because they have more descendants who honor them and come to them for assistance. Their influence has been reinforced over hundreds of years.

“Let’s say you have a Grandpa Edward who lives to be ninety-two and is still sharp as a pin. If he has offered advice, taught three generations how to do the family skill, he’s gained a great deal of respect because of that. It’s the same process for the ‘aumakua that come from old times.” 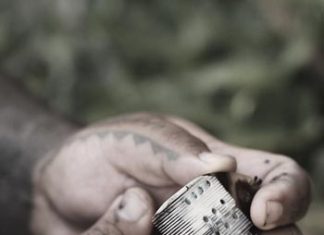