In 1959, shortly after Hawai‘i became a state, Gordean made history as the first Miss Hawaii at the Miss America pageant in Atlantic City. Miss Mississippi earned the crown, but fellow contestants voted Gordean Miss Congeniality at both the state and national levels.

The honors came as no surprise, notes Iwalani. “She is and always has been a very humble person who is genuinely kind to everyone she meets.”

During Gordean’s time as Miss Hawai‘i, glamour and luxuries flooded into her life: a custom wardrobe, magazine covers, a multicity tour. She admits that she did it all for the money — the scholarship money, that is.

“Being Miss Hawaii was odd for me because I’m not a competitive person,” she says. “I was the eldest of five and I needed to help my family and pay for schooling, so earning scholarships was my motivation.” She majored in education and taught at University Laboratory School and Punahou School in Honolulu.

While her life is simpler now, Gordean is still living her passions. At her Bailey Farms Maui, she grows and sells protea and other flowers, and nurtures native plants like wauke for tapa, sixteen varieties of lehua, and maile, which she weaves into lei and sells locally.

“My mantra is to make a friend of change. I just love to see things grow and blossom, whether it’s my plants or my students.” She pauses, then adds, “I’m still growing, too. I’m a teacher, but I’m a student forever.” 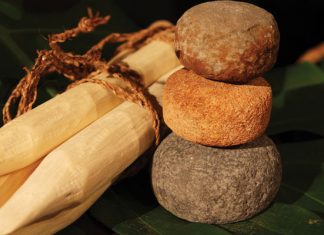