It was at the Royal that Gordean met her future husband of fifty years. John Vandenberg Bailey had been hired to do public relations for Matson Navigation Company, which opened the hotel in 1927 to complement its passenger service from the West Coast.

“Growing up, I had only dated local boys, but he had a sweetness about him that I was attracted to.” Gordean laughs, remembering how protective her father, Gordon Lee Sr., could be when it came to anyone wanting to date his young daughter. “Before I could drive, my dad would work all day at Pearl Harbor and then at night take me to my jobs. He sat and waited, so he kept an eye on any suitors and boyfriends, including my future husband.”

In fact, Gordean’s career was a family effort.

“Every night my mother would make me fresh lei, and because I was a holokū dancer [dancing in a long, formal dress], she would string ones that were seven or nine strands down to my knees. She would do these beautiful lei of epidendrums [orchids] shaped like little stars.”

Gordean pauses as if to scan her memory bank before moving into song: “I would dance to things like ‘I’ll Weave a Lei of Stars for You’ or ‘My Sweet Gardenia Lei.’”

As her voice lifts in songs she first sang half a century ago, the melodies draw forth both laughter and tears. She smiles and apologizes. “Oh, boy, I get emotional, hearing those songs again.” 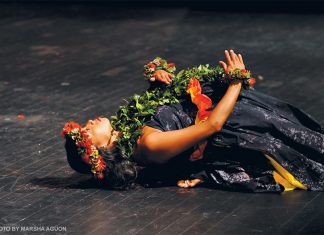