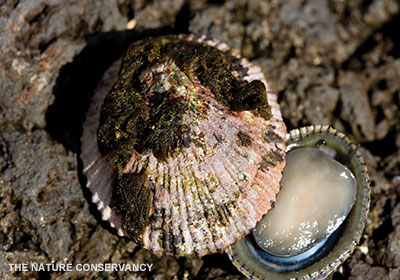 Outside of Hawai‘i this is hard to explain, all this fuss over a limpet — a saltwater cousin of the garden snail that lives where waves collide ceaselessly with shoreline boulders. But here in the Islands, people regard ‘opihi with a smile of affection and a certain gustatory lust. They are a gotta-have for any truly authentic lu‘au, the kind you throw for baby’s first birthday or your daughter’s wedding. In effect you are serving salty snail meat, but in fact you are presenting a symbol of pre-Contact Hawaiian diet, a fixture of the lauhala-mat cuisine known to former ruling chiefs. So you will pay $100 or even four times that for a gallon-size easy-seal bag of the critters. ‘Opihi pickers who range the shorelines with burlap sacks can earn thousands in a single raid.

And they can die, working the intertidal zone with their backs to the smashing waves. An ‘olelo no‘eau (Hawaiian proverb) states: He ia make ka ‘opihi: “The ‘opihi is a fish of death.” When waves strike, ‘opihi grip the stones with seventy pounds of pressure per square inch. Humans — not much suction there. So, in human terms, the ‘opihi is responsible for more marine deaths each year (one or two on average) than any other animal, including the shark. Of course, ‘opihi aren’t “responsible” for anything. They are just holding tight, like all of us, for survival.

Hawai‘i has three endemic species of these limpets, all in the genus Cellana. Other species are widespread throughout the Indo-Pacific region, although no other place can claim three distinct kinds. Apparently the Hawaiian species are tastier than others, as these little mollusks are not much consumed elsewhere. (Japan has a limpet cult.) Ours have distinct names in Hawaiian and in science-ese, and they live near each other at three distinct levels of the intertidal zone.

‘Opihi are univalve gastropods. That means they have one big foot and a protective shell into which they can tuck all their tender parts. Their shells rise to a point, forming a wide cone. Apparently they stash salt water in this cone so that they can keep breathing when the waves subside. And they graze all day on microalgae, scurrying a few millimeters at a time here and there.