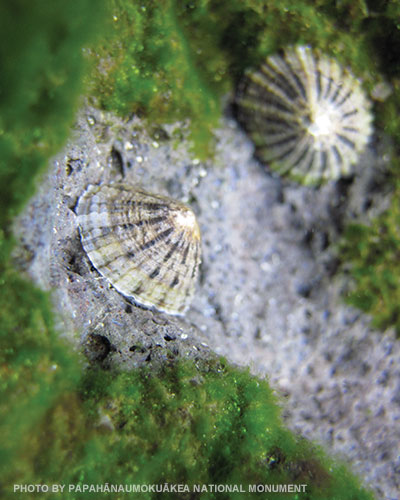 They figure large in traditional Hawaiian culture. The meat is one thing — popped right off the rocks and swallowed crunchy live, or grilled and served poke style. The shells are good little tools for peeling taro corms, and contribute mineral nutrients to farmers’ fields. You find the shells placed on ahu (shrines) from old days, and the revered native Hawaiian educator and cultural anthropologist Mary Kawena Pukui stated that some people consider them to be ‘aumakua, or ancestral spirits. These days, “‘opihi” is an obvious metaphor for anything clinging, including unwanted admirers and (especially) infants who refuse to be taken from their mothers’ embrace.

East Maui residents whose lives still align with the old ways of subsistence farming and fishing regard the ‘opihi as a staple. It has upset them in recent years to see supplies declining. In 2008 the boards of Kipahulu ‘Ohana (established 1995) and Na Mamo o Mu‘olea (2002) both recognized that ‘opihi populations had dwindled, but they had no hard data to prove it. Nor did they have a model for effective response. So they began to look for allies, and they found some good ones.

The Nature Conservancy stepped up quickly via its Maui Marine Program director, Emily Fielding. Because she is adept with ‘opihi pickers, as well as marine biologists and government agencies, Fielding began organizing informal meetings and workshops. She brought together people who otherwise would never have met — and government people who needed to speak to each other. For example, the National Park manages 1,500 meters of ‘opihi-laden shoreline in Kipahulu, but its responsibility extends only to the sea, and the State takes over from there. ‘Opihi live right on that boundary.

Hawaiian opihiScientists found themselves learning from the rooted residents, and have even taken several (Hank Eharis, for one) on research cruises to the Northwest Hawaiian Islands National Monument (Papahanaumokuakea) to help study ‘opihi populations in that wholly unharvested area. Best of all, the residents adopted a monitoring protocol to put hard numbers on their gut sense that ‘opihi are being taken with reckless disregard for the future. By doing methodical surveys, the residents can prove now that 2010 population levels shrank by as much as 50 or even 60 percent in the ensuing four years.

The problem is not with the ‘opihi, whose reproductive habits are fecund to say the least. Nor is it environmental degradation. The problem is humans. Says marine biologist Dr. Chris Bird, “Across Hawai‘i there is a tight relationship between human population size and decline in ‘opihi populations.” On O‘ahu, for example, where Bird earned his Ph.D. at the University of Hawai‘i with a particular focus on ‘opihi, one species is probably extinct and the others are rare. (After he chose his research focus, he says, “I didn’t even see an ‘opihi for a year, until I went to other islands.”) He says that if you put the entire population of O‘ahu along the shoreline facing out to sea, each person would have just ten centimeters (four inches) of space for ‘opihi-picking. On Maui that number is one meter (about forty inches) and shrinking. It’s not hard to see where Maui is headed.