“‘Opihi is our lifestyle,” says Keahi Lind, a commercial fisherman and cattle rancher from the remote East Maui district of Kipahulu. “Used to be, when we enjoyed a day at the beach, always had plenty of ‘opihi, two or three a night for everybody.”

He and others from the Kipahulu ‘Ohana — an elder council whose name contains the Hawaiian word for “family” — have driven the twisting belt road to meet here, at a concrete picnic table beside shining Hana Bay. It’s late afternoon. The sun is headed over the mountain for its usual day’s-end dazzle on the other side of the island, leaving the little round bay quiet and slowly darkening. A couple dogs are racing harmlessly around, five tourists are washing sand off their legs, and pickup trucks are parking under the trees. It’s pau hana — after work — time to hang out.

Hank Eharis is with us. “We live off the shoreline. That’s our backyard. That’s our icebox. As kids, we were not going to the store for a bag of chips. We went running to the seashore to pick a few ‘opihi.” Hank is a mature Hawaiian mountain man whose face creases easily into mirth and kindness. He works as resource manager for the National Park Service and typically spends days at a time in the wild upper forests. He has come to the bay to speak for Na Mamo o Mu‘olea — “the descendants of Mu‘olea” — a point of land along the East Maui coast. A registered nonprofit like Kipahulu ‘Ohana, Na Mamo o Mu‘olea is dedicated to the self-governance of a small community whose roots go deeper than recorded history.

“‘Opihi,” he says, “it’s the taste of the ocean. You take a couple off the rocks, add some limu [seaweed] — no can beat.” But lately the ‘opihi populations have crashed along East Maui’s shorelines, and the two communities have begun to take action, establishing no-harvest zones, patrolling those areas themselves, and learning scientific monitoring protocols to measure the vitality of this wild resource. In doing so, they have developed a model for bottom-up conservation practices, a model with broad implications: Don’t wait for the State to prevent the greedy grabbing of waning resources. 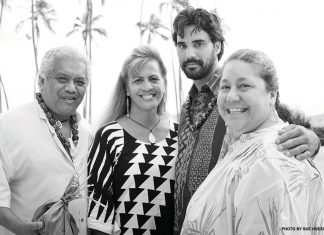 Hawaiian culture evolved over millennia, then almost disappeared after Western contact. Maui's cultural advisors are committed to bringing it back.