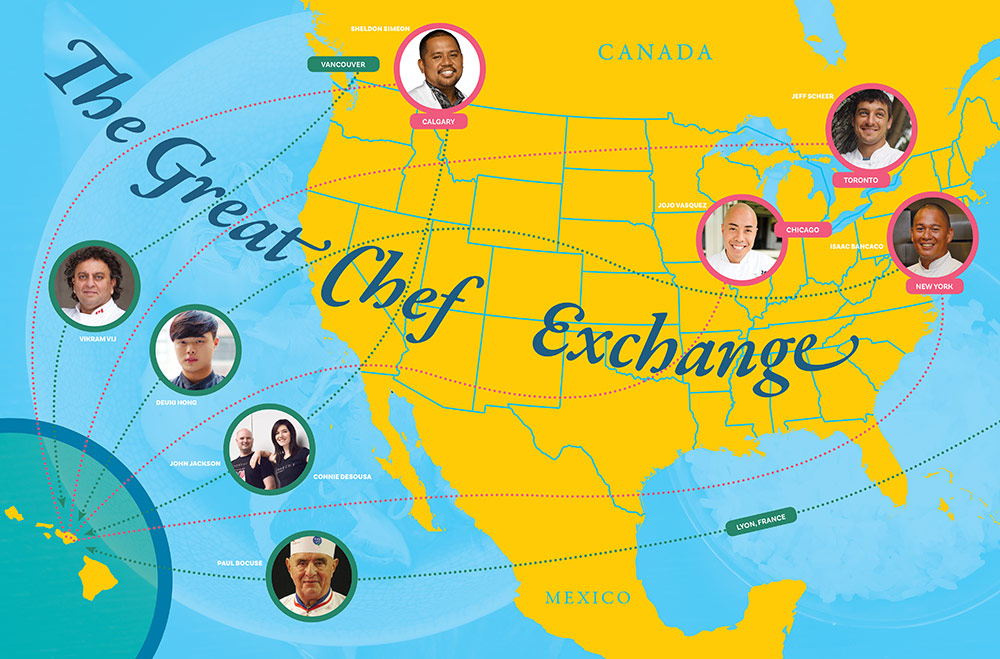 “Can I go see the chickens?”

Deuki Hong, famed New York–San Francisco chef and the coauthor of the edgy cookbook Koreatown, has just arrived at my four-acre farm on Maui’s north shore — and can’t wait for a close encounter with the poultry.

My friend MiJin Kang, chef de cuisine of Andaz Maui Resort’s Ka‘ana Kitchen, had called to ask whether she and Mill House Sous Chef Tak Toride could bring Hong out for a visit. (Duh! Of course!) Now, flanked by his friends, Deuki is hyperventilating in my chicken coop, and confessing, “I’m opening Sunday Bird, a new fried-chicken restaurant in San Francisco, and I’ve never even been around chickens.”

Shaking his arms at his sides as if readying for a 100-meter sprint, he declares, “Okay, I’m ready to do it.” MiJin and Tak fail miserably to hold back their laughter as I hand Deuki a Rhode Island Red. He grasps her tightly and tucks her under his arm in a death grip. “Loosen up,” I say to him gently, as thoughts of the poor girl being crushed flutter through my mind. “Relax. She’s not going to attack you.”

How on Earth did a chef of Hong’s caliber end up having a virginal chicken experience at my Huelo farm? In 2016, Andaz Maui’s Executive Chef Isaac Bancaco accepted an invitation to cook at the famed James Beard House in New York City, and brought along MiJin and Executive Sous Chef Ritchard Cariaga. While there, the three Maui chefs arranged to meet Deuki, and a friendship hatched. Soon after they returned to Maui, they sent Deuki an invitation to visit. The rest is chicken history.

Or at least, recent history. In 2002, Charlene Kauhane, a public relations consultant for the Maui Visitors & Convention Bureau, cooked up the brilliant idea of spotlighting the island’s dining scene through chef exchanges between restaurants in North America and those here in the middle of the Pacific Ocean. In 2007, the MCVB team rolled out the first of these exchanges — sending Sheldon Simeon, a Bravo Channel Top Chef contender, to Calgary, Canada, where he shared the spotlight with Chef Connie DeSousa, a Canadian Top Chef contender, and her chef-husband, John Jackson (the two own CHARCUT Roast House). Prior to heading to Calgary, the Hawaii-born Simeon admitted to Charlene, “I’ve never met Canadians before,” and in his next breath, asked her, “Are they nice?”

Needless to say, Sheldon wowed his Canadian hosts with a repertoire of island-style ethnic dishes, while Charlene plotted the exchange portion of the program: Connie and John would travel to Maui to create a collaborative dinner with Sheldon at UH–Maui College. The Canadian chefs arrived shortly before the Maui County Farm Bureau held its inaugural Agricultural Festival at the Maui Tropical Plantation in Waikapū. Connie and John spent a week touring Maui farms, experiencing the island’s restaurants, dining experiences, and meeting other island chefs. The culmination of their visit was an Ag Fest cooking competition between the chefs of CHARCUT and Maui.