For the first time in ‘Aipono’s eleven-year history, Maui’s chefs elected one of their own to a second reign as Chef of the Year. Winning two of these prestigious peer awards may be unprecedented, but in Sheldon Simeon’s case, it’s hardly surprising. 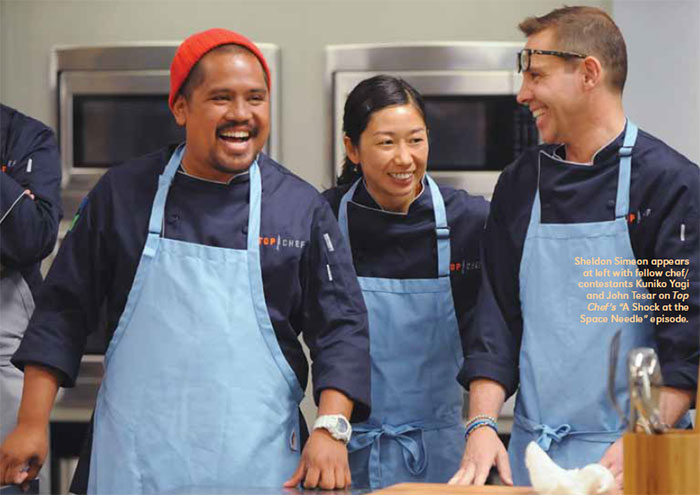 Simeon won the title in 2011 after rising to the forefront of Maui’s food scene as executive chef of Star Noodle. Under his leadership, Star Noodle won the ‘Aipono Awards for Best New Restaurant in 2011, Restaurant of the Year in 2012, and Best Noodles in 2013.

By the time he took the helm of a second award-winning Hoaloha Na Eha restaurant, Leoda’s Kitchen & Pie Shop, in late 2012, “Chef Wonder” (Simeon’s twitter handle) had been nominated for a James Beard award as 2011’s Rising Star Chef of the Year—with Star Noodle nominated as Best New Restaurant. Food & Wine named him the People’s Choice Best New Chef in 2012 (and nominated him for the same award in 2013). Star Chef, a magazine for culinary insiders, dubbed him Hawai‘i Rising Star Concept Chef.

In 2013, Chef Simeon won the hearts of viewers across the country, who voted him “Fan Favorite” as he made his way to the finals in Bravo Network’s Top Chef competition.

“His visibility on Top Chef this past year, and getting recognized for his Filipino-inspired cuisine [was] awesome for the State of Hawai‘i,” Alan Wong, celebrity chef/owner of Amasia stated on his ballot. But will success spoil this affable Hilo native?

“Me being down by the beach with my family and friends, that’s really who I am. . . . Going on this television show, that comes second to who I am and what Hawai‘i is all about,” Sheldon told Hollywood Reporter’s Seth Abramovitch.

Sounds as if our high-flying chef still has his feet firmly planted in the ‘āina.

Congratulations, Chef Sheldon, for the first-ever double win as ‘Aipono’s Chef of the Year!
—Marti Rosenquist