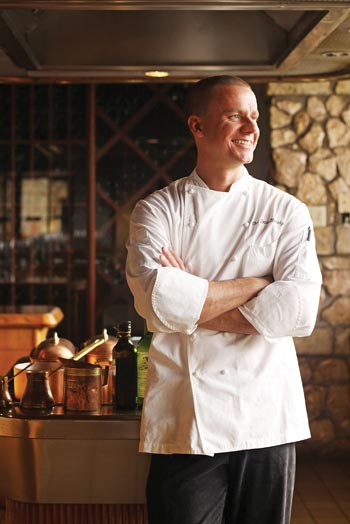 At a torchlit table tucked into Capische’s meandering herb garden, I dip my spoon into the house specialty. My bowl of cioppino fairly overflows with Kona-raised Maine lobster, Moloka‘i shrimp, and giant scallops. I inhale; the exquisite scent of saffron envelops me. Beneath the shellfish, ribbons of capellini lie curled in a spicy tomato-saffron broth. My new definition of heaven: this seafood stew plus an endless supply of garlic sourdough to sop it up with.

Capische, voted “2011 Restaurant of the Year” by readers of this magazine, ably sets the stage for such transcendent dining experiences.

Celebrating its ninth anniversary, Capische at the Hotel Wailea is the little restaurant that could. Chef Brian Etheredge was just twenty-six when he took over the small North Italian eatery, then in Ma‘alaea. Relocating it to well-heeled Wailea, he quietly slipped in amidst such big shots as Wolfgang Puck and Beverly Gannon.

Before long, Capische was collecting high praise. Rumors of perfect truffle risotto, delectable carpaccio, and meltingly tender lamb shank drew foodhounds up to the nine-table restaurant perched on the lanai of an off-the-beaten-path hotel. Nods from Fodor’s, Wine Spectator, and The Maui News readers’ poll were followed by a tip of the toque from fellow chefs, who voted Etheredge “Chef of the Year” in the 2008 ‘Aipono Awards.

Capische doubled in size, sprouting tables in the downstairs garden. Etheredge brilliantly transformed the attached teppanyaki restaurant into Il Teatro, an exclusive dining room where guests feast on four to fifteen courses cooked at their table. The expanded restaurant retains its intimacy, but that doesn’t stop the staff from hosting rapturous parties for 500—complete with lobster boils, Kobe beef stations, and fresh-shucked oysters shimmering on a carved ice bar.

“The guys in the kitchen know that when we’re busy, I get to cook sautée,” laughs Etheredge, who still gets a buzz from working the hot line.

Refreshingly, the chef-restaurateur is a collaborative force in the kitchen. He embraces fellow chefs—giving his right-hand man, Chris Kulis, the lead in Il Teatro, and partnering with Dan Fiske of Private Maui Chef on catering events. (Etheredge and Fiske also jointly       support a school garden at Kïhei Elementary, lending both money and muscle to the project.)

“Everyone brings something to the table,” says Etheredge. “At Capische it’s not your traditional brigade system, with your dishwasher and prep cook at the bottom rungs. Everyone knows every station.” As a result, service is seamless.

The restaurant’s deceptively casual name is fitting—Italian-American slang for “get it?” Dine at Capische and what you’ll get is simply the best. 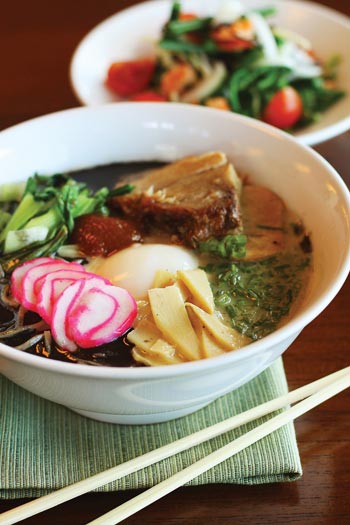 Star Noodle was a shoo-in for “Best New Restaurant.” Even before opening its über-hip doors at the top of Lahaina’s new business park, the noodle house had more Facebook friends than your kid brother. As the newest member of the Hoaloha Na Eha family (which includes perennial ‘Aipono Award-winners Old Lahaina Lu‘au and Aloha Mixed Plate), it was destined to win locals and tourists over with food that’s fun and authentic.

Star Noodle’s menu of soups and small plates is a spicy marriage of local food traditions and to-the-minute trends. Noodles are made in-house, from recipes handed down through   generations. Limes for pickling dry on the rooftop, just as they did in plantation days. But instead of generic backyard citrus, these are gourmet Kalamansi limes.

Simeon has a kitchen full of sophisticated toys: beside bathtub-sized bowls for mixing kim chee sit a smoke gun for infusing dishes with aromatics and an immersion circulator for experimenting with sous vide. The energetic chef tosses just about everything into his sous vide machine: flatiron steak, fruit, and cabbage cores are vacuum-packed, submerged in water, and  slow-cooked for hours—all with amazing results. His succulent kalbi steak with fennel tsukemono drew rave reviews at this year’s “Buy Back the Beach” benefit. The crispy Vietnamese crepe and bacon-flecked Brussel sprouts are irresistible.

Star Noodle’s fresh take on tradition caught national attention; both the restaurant and its chef were semifinalists in this year’s prestigious James Beard Awards. Simeon credits his employers and coworkers.

“The staff is so energetic,” he says. “We’ve got super-talented chefs, so we’re constantly bouncing ideas off of each other.” The bartenders and waitstaff are spot-on, too, fluent in the menu’s daily specials, cocktails and sakés. Dressed in their uniform gray-and-red Star tees, they give the impression of off-duty superheroes. 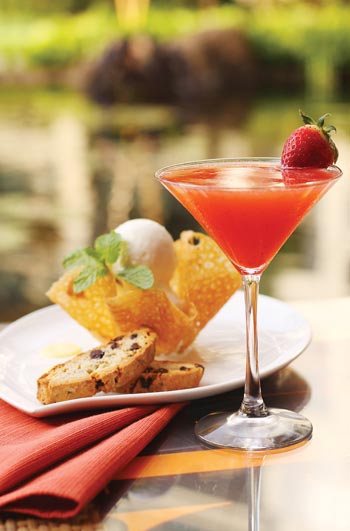 Hidden in the Westin Villas at the north edge of Ka‘anapali, the restaurant that won  “Best-kept Secret” last year snagged “Best Italian” Silver this year. Guess it’s not a secret anymore.

Elegant and moderately priced, Pulehu, an Italian Grill, is an attractive option for resort guests and locals alike. Tables overlook a serene koi pond on one side and the impressive, glass-enclosed kitchen on the other. The restaurant’s specials—a three-course prix fixe menu for under forty dollars, all-you-can-eat Monday night buffet, and half-off discounts for Maui residents—add to the allure.

Executive Chef Francois Milliet developed a taste for Italian food early on. As a youngster in Switzerland, he accompanied his father, the village butcher, on deliveries to Italian restaurants. After moving to the U.S., Milliet found himself cooking in Oxnard, California, surrounded by some of the world’s most fertile farmland. An intimacy with raw ingredients shapes his approach to food.

“It’s all about the meat,” says Milliet of his Chianti-braised short ribs, which are smooth and rich. “The wine element adds depth to the dish. All of the components melt together. It’s very comforting.”

The chef delights in the year-round availability of ripe local produce and fresh-caught fish, which he highlights in dishes such as the butternut squash ravioli with macadamia nuts and risotto-crusted monchong atop roasted vegetables. Farm-fresh ingredients grace the bar menu as well—crushed macadamia nuts rim martini glasses  and Kula lavender syrup sweetens designer cocktails.

Pulehu is closed Tuesday and Wednesday nights, allowing the management to accommodate special events. To celebrate the restaurant’s first anniversary, they hosted a marvelously indulgent Chocolate and Truffle Decadenza. Tents wrapped around the koi pond, each offering a different truffle or cocoa-laced dish. Recently Pulehu’s sous chef hosted a Thai dinner, sharing specialties from her home country. These departures from the regular menu allow the Pulehu chefs to expand their repertoire and explore new territory.

What culinary trends does Chef Milliet see on the horizon? Vegetables increasingly stealing the spotlight from meats. He also predicts a return to slow-cooked food. “As everything goes faster,” he says, “deep down you want that comfort, those flavors you grew up with.”

For those of us who didn’t grow up eating truffled potatoes and prawn risotto, it’s never too late to start.