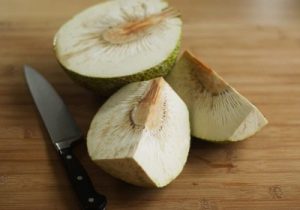 I was introduced to fresh vegan ʻulu (breadfruit) egg(less) nog fifteen years ago. The sweet meat was scooped out of the collapsed ripe skin and blended with coconut milk and spices that speak of the holidays: nutmeg, cinnamon, and ginger. Imagine my excitement when I heard that Waikapu resident Hōkūao Pellegrino, an archaeologist, wai (water) activist and kalo (taro) farmer branched out to include ʻulu in his food production repertoire, specifically in the form of flour. His passion for growing ʻulu began years ago when botanist Anna Palomino, Hawaiian plant botanist introduced him to an ancient ʻulu tree in Hoʻolawa Valley on Maui’s north shore. He says, “The tree was so old, its trunk was the width of a small car.” He harvested root cuttings, and so began his love affair with Hawaiian ʻulu. Output of the tree boggled him as it fruited three times a year with each fruit averaging five pounds. He shares, “I worked for two years to perfect the flour, and I’m very happy to say we use only one variety: Hawaiian ʻulu. It takes four pounds of raw ʻulu to make one pound of flour which we sun dry, then mill.”

I recruited one of Mauiʻs top mixologists, Ross Steidel of Perfect Pour Maui to create two heavenly holiday versions for Maui Nō Ka ʻOi Magazine: one with eggs and cream, and one vegan version.

“I wanted to create a nog that focused a little less on the traditional ideas and tastes of the holidays. I added the  rosemary, Vecchio Amaro and Chartreuse to impart a herbal and menthol aspect in the cocktail, reminding me not so much of cookies and brownies coming out of the oven, but the smell of fresh cut Christmas tree, which is actually enhanced by the vegetal-fruity flavors of the ʻulu flour.” –Ross Steidel, owner of Perfect Pour Maui and winner of Maui Ocean Vodka’s Ultimate OCEAN showdown cocktail competition for his Poi Dog cocktail. 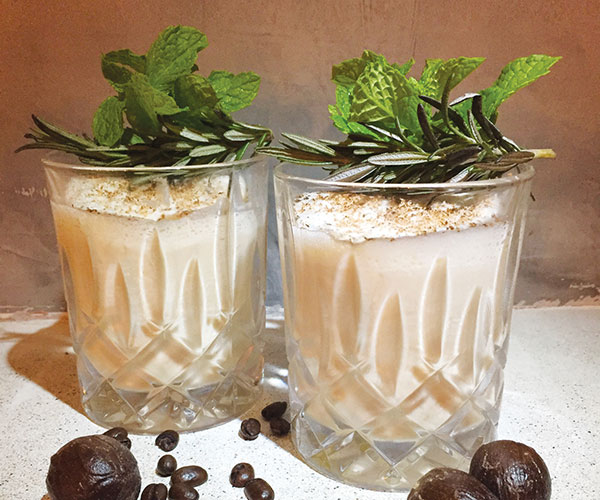 Stir honey and water until combined. Scrape vanilla beans into syrup and stir well. Cool to room temperature, then refrigerate.

Procedure: Whisk malt, ʻulu flour and egg yolks until smooth and creamy. Whisk in honey syrup, liquors, and coconut milk. Refrigerate a minimum of three hours.* Before serving, whisk egg whites to soft peak stage (until the peaks curl when the beaters are lifted from the mixture), then fold into the chilled nog. Ladle into festive glasses and garnish with mint, rosemary sprigs, grated nutmeg, and coffee beans.

*The eggnog will thicken and improve in flavor, and will keep for weeks under refrigeration, thanks to the high alcohol content.

For a vegan version:

Omit all eggs from the recipe and replace egg whites with 8 oz chickpea brine. At service time, whip chilled brine with a wire whisk for approximately eight minutes, or until fluffy. Fold into nog. Serve immediately.