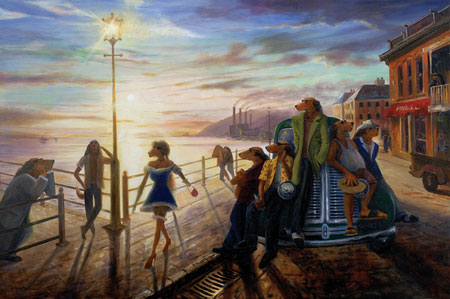 The Port’s charms were many. In quaint seaside cafes and bars, for the price of a beer, you could sit and watch endless Arcadian sunsets that seemed to have spilled from God’s paintbox. There was also the Port’s fishing fleets heading across the bay and the unique spectacle of Revellers Green with its kaleidoscope of sights, sounds, and colours.
—from The Lonely Dog: An Alveridgean Legend

Welcome to the world of Port Alveridge, an imaginative coast that exists only in the book The Lonely Dog: An Alveridgean Legend. Port Alveridge was created by Ivan Clarke, a second-generation artist best known for classically representational paintings of magnificent landscapes and romantic florals; his hallmark style uses traditional, formal techniques that subtly emphasize light as it falls naturally on the subject, resulting in graceful, effortless canvases.

That is why it is so surprising that Clarke has ventured into the realm of Alveridge, a place depicted in dark, hardboiled, cartoonesque sketches, oil paintings, and bronze sculptures, and inhabited by a central character inspired four years ago by Clarke’s pet dog, a long-haired, miniature dachshund named Arthur, who doesn’t like to be left behind.

Arthur’s alter ego is Arthur Vantrong Snout, one of many characters that Ivan invented in his art studio when playing around with the concept as a hobby. Over time he developed a mysterious lineage for the dog, and later the whole world of Alveridge, populated with other anthropomorphic dogs and cats. In 2004, Ivan decided to put the Lonely Dog story into words; since then, he’s co-written an 80-page version that’s just been released.

Port Alveridge makes subliminal use of Maui landmarks and landscape. The “Port’s charms” and “quaint seaside cafes and bars” call to mind Front Street in Lahaina, where you can “sit and watch endless Arcadian sunsets” dissolve in rosy golds behind the Island of L¯ana‘i. The “Port’s fishing fleets heading across” hearken to Lahaina Harbor, and “Revellers Green” could be Banyan Tree Park.

“The paintings are a blend of Maui, particularly Pa‘ia and Lahaina, rusty and dusty, not too flashy,” explains Clarke. “Port Alveridge is a liberal melting pot with all cultures, all grades of hounds and cats, the only place where they live together—it’s like a visitor’s first day on Front Street, where they all mingle and see the sights. That is a fantastic base to create strong visual imagery.”

In fact, Maui is integral to the story. Every year, Clarke and his family pack their bags to spend a month on the island, traveling northeast from their native New Zealand. Unfortunately, Arthur always gets dropped off at a kennel on the way to the airport. “We would drop him [off] in the basket on the sheepskin pillow, looking very sad,” shares Clarke, during one of our long-distance phone calls, “and come back weeks away to see that he didn’t make any friends. He’s not the smartest dog, a little nerdy, but he did inspire the story. We would tell the kids about how Arthur was lonely. . . .”

While he’s cooped up, pining for his family pack (as Arthur might add, if he really could talk), the Clarkes soak up the sun in Sprecklesville and windsurf the waves at Ho‘okipa Beach Park, as they have for the past 10 Julys. Sometimes when visiting, the family housesits for Jim and Nancy Killett—the owners of Lahaina Galleries—where Clarke’s work shows exclusively in Hawai‘i and along the West Coast in California and Oregon. He’s exhibited with them since 1997.

In his first painting of The Lonely Dog, Clarke illustrated Arthur as he imagined the pooch, left behind in New Zealand—no longer at the kennel, and with human qualities. We see Arthur standing upright at the harbor next to a streetlamp, watching as his family sails away on an ocean liner bound for Hawai‘i. The distant horizon is lined with red and orange, and a half-moon peeks out from the twilight-blue sky above. This is a romantic, even dreamy-looking scene . . . with the exception of a “STAY” sign situated strategically to the dog’s right, barring entrance to the ship landing.

“I did [the illustration] for fun, spontaneously, and scribbled ‘Lonely Dog’ as the name,” Clarke explains. “It was actually quite a profound, definitive moment for me, yet [the piece] stayed unframed in the studio for about a year. I would look and it evoked my imagination, brought it slowly to life, and people would comment, they would laugh—I would tell a small story, a different story, and painted a series over time. It’s interesting how a picture can create thoughts and questions, and you can come up with more.”

The tale—um, tail—has continued to wag: On a lark, Clarke presented the Lonely Dog concept to Weta Workshop, in Wellington, New Zealand. Named for a bizarre New Zealand bug (the weta—a giant, prickly, prehistoric cross between a cricket and a cockroach), this creative studio is hands-down one of the world’s leading comprehensive film- and television-effects companies; its creative crew won five Academy Awards for their work on The Lord of the Rings. The same company worked on the latest remake of King Kong. (Does the name Peter Jackson ring a bell?) Clarke got a call back a few weeks later from the head of the company, Richard Taylor, who voiced interest in working together and potentially taking the Lonely Dog to the big screen!

A side partnership with Weta has been producing the layout and graphic elements for the book, Clarke’s second. “This is a book of all books,” says Clarke, “a sensational work of fine art with a big team; it’s a big book, thick, leather-bound with a hound’s head medallion cast in bronze and affixed to the front. There are 1,950 [copies] signed and numbered, and it comes in [a] wooden box. It’s an heirloom, a true collectable, the complete work, the foundational bible of Alveridge with all the folklore, history, music, poetry, character profiles, interviews, several pages out of the Port Alveridge newspaper. . . .”

Clarke talks about The Lonely Dog as if he lives in Port Alveridge himself, and the cast of characters incorporates family, friends, and neighbors. They’re all very real to him, and his attachment to Port Alveridge and its irresistible inhabitants is contagious. We’re just happy Maui’s beauty helped contribute to it.