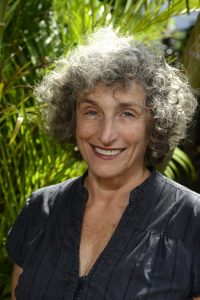 Our publisher, Diane Haynes Woodburn, is on safari in Africa and won’t return until after we go to press. Hence my guest appearance on this page.

I am well aware of the irony of my diving into this column just as we present our annual swimsuit issue (which also features Rick Chatenever’s fun story on Maui’s Pink Caps swim club, page 30). I have my own issues with swimwear, and not just because I am both a senior editor and a senior citizen. Even in my youth, when I weighed only . . . well, that’s none of your business. Let’s just say that being short and carrying my weight around my middle meant I could never find a one-piece whose crotch didn’t reach my knees.

I had no such problem with bikinis—unless you count the unnerving episode that took place my junior year in college. I was sunbathing in my dorm’s backyard, lying on my tummy with my top unhooked, when a bird flew overhead and landed a direct hit in the middle of my back. No kidding. I’m the only one occupying that whole expanse of lawn, and this avian bombardier hits his target with precision that would have done the Blue Angels proud.

The suit top hooked in the back. Do you know what it’s like to have to instantaneously and awkwardly choose between modesty and sanitation?

As I grew older, bikinis stopped being an attraction for me—and for the beachgoers who kept selflessly offering me their towels. My quest for a one-piece began in earnest. Occasionally I’d locate a suit whose proportions approximated mine, but invariably by the time it wore out, that style was no longer available. That, or the store itself had closed. (I’m talkin’ to you, Sports Authority.) The other option was squeezing into smaller sizes, which had the additional advantage of letting me blame my shortness of breath on the suit, rather than my being out of shape.

A couple of years ago, I went to Lāna‘i with creative director John Giordani and managing editor Lehia Apana. We were researching a story on the island and its Four Seasons Resort. Since we had a lot of ground to cover, I assumed we wouldn’t have time for a swim in the pool, so I didn’t bother to pack a suit. Lehia and John both brought theirs—and John doesn’t even swim. So when it turned out that we’d have a free afternoon, after all, I was desperate to find one for myself.

After calling every emporium in Lāna‘i City except Richard’s Market, I hit the hotel shops and actually found a suit that fit! Sure, the price tag was more than the rent I paid for my first apartment, but beauty does not come cheap. Silhouettes of tiny white palm trees constellated across the night sky of the one-piece. A fashionable cord of the same material issued from a grommet, front and center, and tied around my nape. I’ll admit it: I looked good.

Looked good as I sashayed to the beach chair where I draped my towel. Looked good as I addressed the periwinkle pool. Looked good . . . until I dove in and the top of the suit did its own dive. A deep one. I still don’t know which was more embarrassing: a wardrobe malfunction in front of my fellow pool goers—a gaggle of Japanese men—or their not bothering to look.

I can’t tell you when my most recent swimsuit calamity began, only when it ended: the day I held my old Speedo up to the light—the suit I’d been wearing at the Pukalani pool several times a week—and saw that the seat of the suit was worn to semitransparency. (You guys in lanes two and four could have told me, you know.)

Still, hope springs eternal. As you thumb through the pages of this, our swimsuit issue, I encourage you to decide which of the models on pages 40 through 45 might be yours truly. Until then, I’m gonna see how buoyant a burka can be.