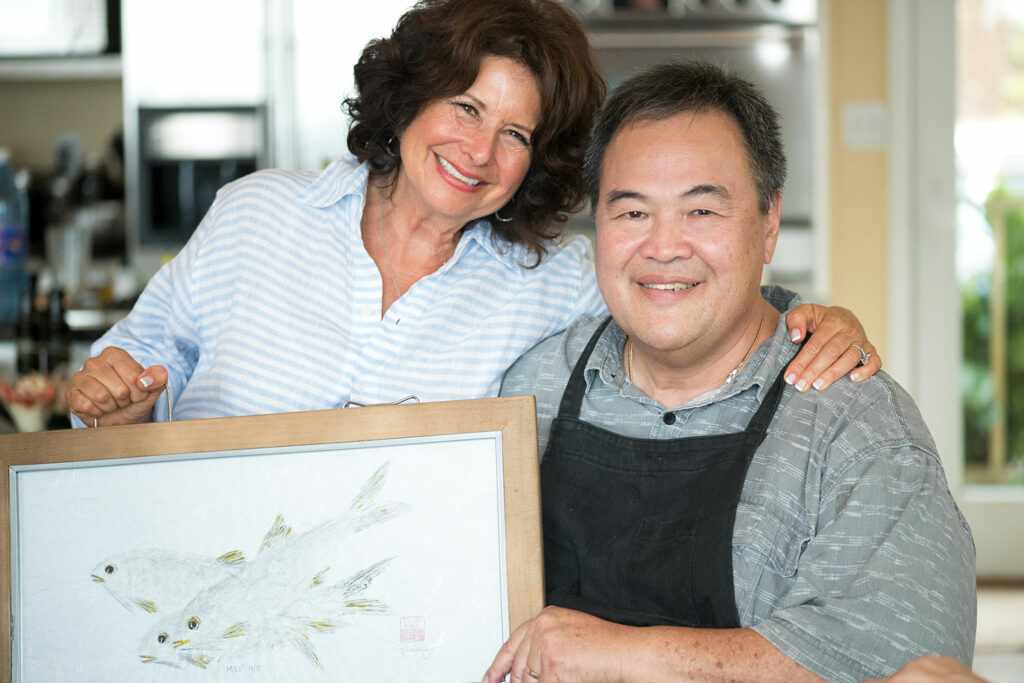 This is for you,” said chef Tylun Pang as he handed me a makana, a present, wrapped with rafia.

It was 2017, and Maui Nō Ka ‘Oi had invited chef Pang to design the menu for our Holiday Test Kitchen and to be our mentor in its creation. He had graciously accepted, and on the day of the event, arrived with cooler after cooler of fresh ingredients and all the tools necessary to carry out the preparations. He also had printed up a lovely keepsake menu for each participating staff member to take home.

“Why am I getting a gift?” I asked, a little embarrassed. He was giving us so much already.

“Because it’s island style,” he said. “You never come to someone’s home empty-handed.”

Chef Pang set the bar for island style, epitomizing the best of Hawai‘i and how we love and give. He understood the link between family and community, and how food is the common thread that holds us all together.

“Food in a Chinese family is very important, and everyone participates in its preparation in some way or another,” he once told me. “When I was a child, my uncle owned a food stall in [Honolulu’s] Chinatown, and my grandmother was the head chef at Yong Sing, a Chinese restaurant that served delicious dim sum. Some of my fondest memories are wandering in the market with my father and eating freshly sliced char siu [barbecued pork], and watching my grandmother make dim sum at home.”

Dim sum translates as “touch the heart,” and those bite-sized, flavorful pockets would become a chef Pang specialty. In fact, they were one of the featured delicacies on our Test Kitchen menu, and one which we toiled over happily under his guidance.

“What greater homage to pay to friends, family and guests than to share our culture?” he said as I sampled our hard-earned dim sum (which, for the record, was amazing). “Trends come and go, but the history of a place is always around you.”

Chef Pang celebrated the history of the Islands through his cooking. In the 1800s, immigrants came to Hawai‘i to work on the plantations. Chinese, Japanese, Spanish, Korean and Filipino — each group had its own camp, but off the clock, as workers mingled in the fields and mills, their culture and traditions began to influence one another. Chef Pang elevated this uniquely Hawaiian plantation-era fare to an art, creating a sensory experience of time, place and flavor as a tangible expression of love for the islands he called home.

During his 40-year career, chef Pang earned numerous accolades, including the very first ‘Aipono Chef of the Year Award in 2002, the ‘Aipono Friend of Agriculture Award in 2012, and the ‘Aipono Lifetime Achievement Award in 2014. He led the culinary team at the Fairmont Kea Lani Maui for more than 25 years, and under his guidance, the resort’s signature restaurant, Kō, won the ‘Aipono Award for Best Hawai‘i Regional Cuisine every year since its opening in 2012. Chef Pang also was poised to receive an honorary doctorate degree from the University of Hawai‘i Maui College for his contributions to its culinary program.

Though highly accomplished, chef Pang remained a local boy at heart. He gave selflessly, embracing all things pono (excellent) in his everyday actions, including donating the proceeds of his cookbook, What Maui Likes to Eat, to the UHMC culinary program. He embodied the traditional Hawaiian values of humility and generosity, and was a steadfast and encouraging mentor to his staff and students.

“I tell the kids, Make me something you love from your mom’s or auntie’s kitchen. Put your own spin on it,” he once told me. “When food is made with passion, it adds a whole new level to the experience.”

Chef Pang passed away in his sleep on May 6, 2022. He leaves behind a legacy of love in the food he created and the students he inspired. To me, he was the heart and soul of Maui’s culinary community. A big man with an even bigger heart, he showed us that taking care of one another is what matters most.

For you, chef. Me ke aloha pumehana (All the love of my heart),
Diane Woodburn