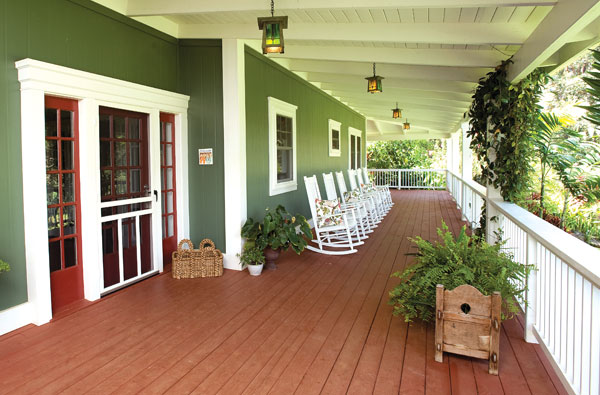 In 2002, Robert Adolph purchased a property on a winding country road in Ha‘iku, intending to create a vacation rental. At the time, the parcel had only a cottage that had been built in the 1970s. “I wanted to build a house that was different from others in the marketplace,” he says. “There were plenty of two- and three-bedroom houses, but not many with four or five bedrooms.”

Trained in construction, Robert discovered he had a knack for home design. He admired Hawaiian plantation architecture, which features low-profile wood framing, vertical-plank siding, and spacious lānais. “There are classic examples of this type of architecture all over the island,” he says. “I drove around taking pictures of houses with design elements that caught my eye. I also saved clippings from architectural journals.”

A surprising amount of thought went into the exterior’s classic green-and-white paint scheme. “I’d already chosen the shade of white I wanted,” Robert says, “but it was important to paint the house just the right green. I gathered leaves from the yard and stapled them to the exterior sheathing, then studied them over several days to determine which hue blended best with the home’s natural surroundings. I took the winning leaf to Sherwin Williams, and they matched it.”

Robert drew inspiration for the home’s wraparound lanai from the one at Hali‘imaile General Store. “I admired the contrast between slender pickets and big, bold handrail caps and posts,” he says. Here, too, his paint choice was meticulous. “The earth in Ha‘iku is mostly red clay,” he says. “So I painted the floor to match the red dirt. That way you don’t see footprints.”

Forethought also inspired the home’s mudroom. Robert envisioned guests picking fruits, vegetables, and herbs from the garden for their evening meal. “You need a place to sit and take off your shoes so you don’t track dirt into the house,” he says. 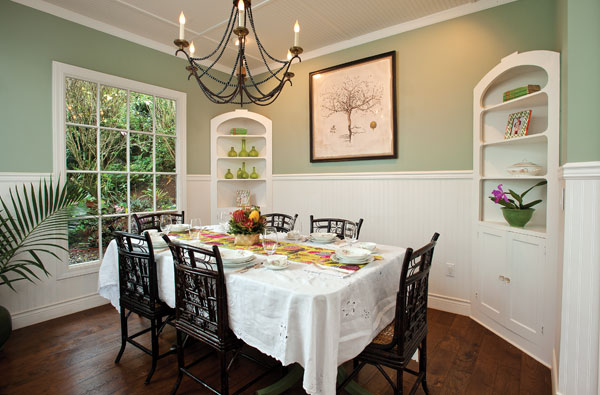 To give the interior a vintage ambiance, Robert scoured the Internet for reclaimed building materials, and struck gold in Seattle. “The distorted glass in the entryway and living room, plus all interior doors, came from an old schoolhouse,” he says. He also scored antique crystal doorknobs and the pair of corner cabinets flanking the home’s dining room. “They were just dingy brown cabinets, but nicely made,” he recalls. A friend in Seattle helped Robert gather “whatever I thought I could use, and had everything shipped to Maui. It was like Christmas when the container arrived.”

Inside, the flooring is engineered oak that’s been distressed to look like the floors in old plantation homes. “It not only looks as though it’s been there for some time,” say Robert, “but you can drop things on it and not see any marks” — perfect for a vacation rental.

A wide archway leads to a spacious farmhouse kitchen, where Robert installed nostalgic checkerboard flooring in light and dark grays. There’s also a dining nook. “I’d always wanted a nook, but they don’t work well in many kitchen designs,” he says. 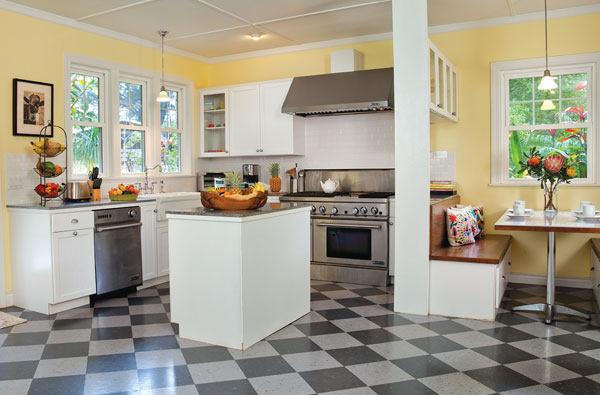 Outdoors, the landscape is filled with an eclectic collection of plants Robert gathered from various sources and obscure places — like the cluster of ti plants he grew from starts. “I made several trips to Hana, hiked up old, overgrown dirt roads, and discovered abandoned nurseries with multiple varieties,” he says.

When changing circumstances made it necessary for Robert to sell the property, its destiny as a vacation rental was delayed — but not lost. Colleen, the woman who became its current owner, says the first time she saw the property, her eyes filled with tears. “When I walked through the gate, I knew it was my dream come true,” she says. “It has the character and feel of a historic home, but with modern amenities. It’s the best of both worlds.”

At first, it was a vacation home for Colleen and her family. “We would come to Maui once a month, and I spent a couple of winters here.” Eventually she decided the house deserved to be shared with others, so nowadays Colleen lives in a separate residence on the property and rents the main house, when not hosting far-flung family and friends.

Six identical Mission-style rocking chairs sit front and center on the lanai, each with its own plump pillow in a Polynesian-inspired design. “People say this is their favorite part of the property,” she tells me. It’s easy to see why — I can imagine whiling away an hour or so enjoying a good book or simply gazing at the abundant landscaping.

As we enter, my eye is drawn to a photograph of a purple passion-fruit flower (liliko‘i) taken by a friend of Colleen’s. “I love liliko‘i, and there’s a lot of it on the grounds,” she says. “So I named this property Liliko‘i Lani Farm.”

Colleen’s daughter Jennifer chose the furnishings. “She has better taste than I do, so I let her have free rein,” laughs Colleen. “We shipped furniture in from all over the world to create an international flair, and added touches of Hawaiiana.” Hawaiian-style quilts and pillows embellish every bedroom, and the home serves as a rotating gallery for works by Upcountry artists such as Cynthia Conrad, Dietmar Rittner, and Donald Shamblin. One reason the art rotates? “Guests are welcome to purchase it,” says Colleen. 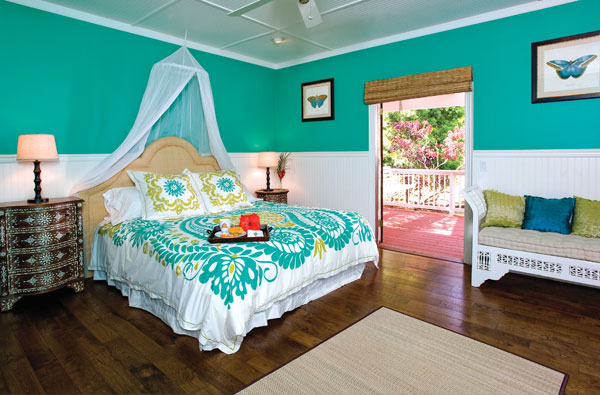 When she needed someone to make a few modifications to the house, a neighbor suggested Robert, since he knew the place so well. Their mutual affection for the property blossomed into a unique and enduring friendship. Colleen commissioned a sea-glass mural from local artist Julie Bunce, and Robert installed it for her above the tub in the hall bathroom, using a casement similar to others in the house to create the illusion of a window. “The mural depicts what you would actually see outside,” says Colleen.
As we sit at the dining-room table, munching on decadent pastries from T. Komoda Store & Bakery in Makawao, Colleen tells me her plans for Liliko‘i Lani Farm. “I’d like for it to be passed down through generations, so my grandchildren can have their children come and stay here,” she says. “If they continue operating it as a vacation rental, that’s their choice. In the meantime, it gives me a wonderful feeling to share this extraordinary house with others.”